Dragon Quest IV: Chapters of the Chosen is a fitting update for a revered NES and PlayStation classic.

Dragon Quest IV: Chapters of the Chosen marks the first time that the popular PlayStation update of the NES original has reached American shores. It's thoroughly engrossing and highly addictive, featuring all of the basic updates that the game saw in its PlayStation release along with a dual-screen presentation and improved 3D environments. Developer Arte Piazza has also brightened up the game's color palette and included a new translation. It boasts fun and unique regional dialects, offering a familiar but fresh experience that should prove a welcome treat.

Dragon Quest IV casts you as a hero destined to save humanity from a powerful evil, but it doesn't immediately thrust you into battle; instead, the game is separated into five chapters, with the first four focusing on a different character. While this format might seem confusing, it effectively and painlessly familiarizes you with the game's mechanics and expansive world map before turning you loose in chapter five. Each chapter opens with a brief cutscene that introduces your new character and chapter-specific goals, which are far more engaging than the usual tasks of leveling up and slaying bosses. For example, in one chapter, you spend time as a merchant busily making money and avoiding combat, while in another, you're a globe-trotting princess solving problems for the local towns. Exploration occurs on a detailed world map and is aided by a convenient color-coded map on the top screen that fills in areas as you progress.

As with most role-playing games from this era, battles are random, turn-based affairs that appear on the bottom screen along with command prompts. Character data is displayed on the top screen to make the area more informative and less cluttered than the PlayStation version. The game now enables you to set tactics for allies either individually or across the board, so if you'd rather order a magic user to focus on healing instead of issuing the heal command every round, you have that option. Likewise, you can now flex a little control-freak muscle and directly order each teammate's attack--a delightful adjustment that allows for more strategic play.

Another convenient feature is that your nonactive party members gain experience whenever your handy wagon is in tow, which generally keeps your whole crew in the same level range. This is extremely helpful because you'll often cycle through party members for different dungeon or boss strategies, and having lackluster benched characters at level 15 when your primaries are 30 would essentially handicap you each time you adjusted your strategy. The wagon boasts a second feature that makes it even more invaluable: You're then able to change party members during battle, which is fantastic when your allies are dead or suffering from status ailments. It's also a great way to manage AI-controlled guest characters that are causing you problems, which is another solid improvement.

Dragon Quest IV suffers from only a few minor irritants that might turn some players away. While monsters and bosses do require a bit of strategic planning, those in the first half of the game are so simple that you can usually get away with mashing the attack command and casting the occasional heal, which makes early battles shallow. There's also not much monster variety until chapter five, with the exception of the popular slime types. Dialogue, which for the most part consists of charming asides or enlightening discussions, can get painfully repetitive when you're trying to save at the local church because the residing priest feels the need to bless you before and after saving your game or removing your poison. Thankfully, you can utilize the quicksave feature to bypass the priest's pointless drivel when it inevitably becomes tiresome.

The most striking element of Dragon Quest IV is that its DS remake received more than just a face-lift: The game is significantly brighter and clearer than its PlayStation predecessor. It also boasts vibrant, colorful environments vividly presented across both screens. You're even able to maneuver the camera to give you a better view of hidden objects and secrets, which is an impressive feature that rarely slows down the game. Towns are charming locations with detailed buildings and flora, as well as full of adorable 2D citizens in clearly visible clothing and accessories.

Enemies have received new animations, with some sporting abilities that cause the camera to turn and move toward an opponent during an attack. This causes your foe to appear 3D for a moment, providing a subtle but impressive effect. Moderate changes were also made to dungeon environments and battle backgrounds to make them more aesthetically pleasing. The franchise's traditional in-game clock makes a reappearance, with battle backgrounds adjusting to the time of day. Battle sounds have been updated as the beeps of yesteryear have been replaced by satisfying sword slashes, while spell effects are both flashier and more believable. The music is boisterous but superb, with a different theme for each chapter and an intense battle song for boss fights.

Though the story's five chapters contain roughly 40 hours of gameplay, you could drastically increase that time by completing side quests, collecting medals, and taking part in other activities. You can visit the casino to play poker, check out the slot machines, or bet on the local fight. The pioneer town side quest has been modified to feature multicard wireless support. This enables you to "chance encounter" a friend who has also started a town and is in chance encounter mode so you can both unlock secret shops. Arte Piazza included the two additional chapters initially seen in the PlayStation version to up the replay value a bit and explain some of the game's events. One chapter serves as a brief prologue, while the other is a complete, if short, epilogue that includes new storyline events and a bonus dungeon. You'll also find that several towns have experienced changes since you're last visit, and it's always fun to return to old haunts for the latest gossip from familiar faces.

Chapters of the Chosen is a charming, absorbing, and addictively fun role-playing game that offers the best chance Westerners have ever had to experience Dragon Quest IV. 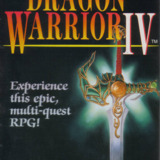