This 3D fighting game can be enjoyed by newcomers to the DBZ universe and Super Saiyan wannabes alike.

If you've managed to steer clear of the popular Dragon Ball Z anime for this long, you can be forgiven for thinking that Burst Limit is a game best ignored. Nevertheless, you'd be wrong. Though this 3D fighter is full of references for the fans, it's a good game in its own right and can serve as an easy point of entry into the DBZ universe.

Burst Limit goes out of its way to be accessible to newcomers with a thorough tutorial that walks you through all of the controls while introducing you to a handful of the characters that make up the game's roster. The fact that all of the PlayStation 3 controller's face and shoulder buttons have multiple uses can be daunting initially, but there are no complex combos or character-specific special attacks to memorize, and even the craziest-looking moves aren't much more difficult to perform than a straightforward punch to the face. You'll need some semblance of skill to time your attacks and to block those of your opponents, but after spending half an hour with the tutorial, you should have little trouble holding your own in a fight, regardless of which character you choose.

Only three combatants are available at the outset, but as you progress through the lengthy Z-Chronicles story mode, you'll unlock the rest of the roster for a total of 21. In Z-Chronicles mode, you get to play through three of the five Japanese Dragon Ball Z sagas, and you experience some of their most memorable battles from the perspectives of both good and evil characters. The Saiyan, Frieza, and Cell sagas as they're told here represent only a tiny fraction of the anime material, but there's generally enough dialog between characters to at least let you know why they're fighting, and that's all you need.

As you play through the 50-plus battles of Z-Chronicles mode for the first time, you'll inevitably unlock most of what Burst Limit has to offer, including a good number of the game's "drama pieces." These brief cutscenes are triggered by events during a fight and invariably benefit the character to which they're relevant in some way. For example, drama pieces can increase one or more of your attributes for a short time, restore some health, or call upon a partner to get you out of trouble. Drama pieces also go a long way toward making Burst Limit feel more like the anime that it's based on by employing quick camera cuts and dramatic close-ups that wouldn't be practical during normal gameplay. By unlocking and subsequently equipping up to three different drama pieces, you can customize a character to suit your play style, and to unlock all of them you need to play through the Z-Chronicles several times. New partners, attacks, and character transformations can also be unlocked in this mode, so you'll probably want to beat it at least once before venturing online to really put your skills to the test.

Like any fighting game, Burst Limit is best when played against unpredictable human opponents, largely because they're less likely to fall for some of the cheap tricks that you can get away with against the AI on easier difficulty settings. In Versus mode, you can do battle either with a friend who is sitting next to you or with other players from all over the world. Battles against players from other continents often suffer from noticeable lag, but if you successfully search for an opponent nearby, then silky smooth matchups are certainly possible. Incidentally, online leaderboards track and grade your performances anytime you choose to fight in a ranked match, and you can use that information to search for opponents of a similar skill level.

In addition to the Z-Chronicles and Versus modes, Burst Limit features a training mode in which you can hone your skills against programmable opponents, and three different Trial modes designed to test different aspects of your fighting prowess. For example, Survival mode tasks you with defeating 100 opponents one after another, which forces you to block or evade incoming attacks whenever possible because only a portion of your health is restored between fights. Time Attack mode challenges you to beat a series of 10 opponents as quickly as possible, and in Battle Point mode, you're awarded a score based on the different moves that you use to win a series of fights.

Regardless of which mode you're playing, Burst Limit is a game that makes an impact with its fast-paced action and a sense of style that's lifted straight from the anime. The colorful visuals and occasionally frantic animation will feel familiar if you're an existing fan of the series, and will impress even if you're not. The environments you fight in are bland, and the edges of the characters aren't always as crisp as they should be, but the overall look of Burst Limit is definitely greater than the sum of its parts. On the other hand, the upbeat soundtrack is something of an acquired taste, and the English voice acting isn't nearly as convincing as that of the Japanese, which is available with subtitles and was clearly the only language used for lip-synching.

Dragon Ball Z: Burst Limit is a fighting game that can be enjoyed not only by DBZ fans but also by those of you who don't know the difference between an aura spark and a Super Saiyan. You'll undoubtedly get more from the game if you're familiar with your favorite character's storyline, but understanding the complex relationships between some of the key characters simply isn't necessary to derive pleasure from taking control of one and beating up another. 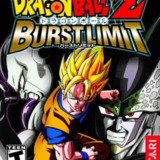