Doom's a genuine classic, and this version of the game remains faithful to the 1993 original.

Sure, there were first-person shooters before Doom. But Doom was the one that made the genre. Originally released in 1993, id Software's hell-on-Mars game revolutionized PC gaming and then went on to make appearances on what seems like a billion different platforms. Well, make it a billion and one, because now Doom is available for download via Xbox Live Arcade. This Xbox 360 version of the game stays mostly faithful to the original, and it holds up well after all these years.

Doom puts you in the role of a lone space marine stationed on Phobos, one of the moons of Mars, where a bunch of eggheads have been messing around with teleportation experiments. As luck would have it, those knuckleheads manage to open up a portal to hell, sending all manner of demons onto Mars. It's up to you to blow apart as many demons as you can as you make your way through level after level. The game is broken up into episodes, but other than a static screen of text that plays at the end of each episode, there's no real "story" to the game. And no need for one. Doom's power lies in its ability to create hectic combat situations that put you up against overwhelming odds as you work your way through the 27 levels that compose the "original" trilogy of episodes, along with the fourth episode that was added after the game's release as a part of Ultimate Doom.

Doom's weapons are iconic, so much so that it still seems insane for a first-person shooter to come out today without basic Doom-inspired weaponry like a shotgun, some sort of automatic machine gun, and a rocket launcher. All of those classic weapons, from the chainsaw to the room-clearing BFG 9000, are present here. As are the classic level and enemy designs. One look at the screen, and you'll probably have the reaction of "Yep, that's Doom, all right." Of course, your own personal feelings about Doom will determine whether that's an excited statement or one of indifference, but there's no denying that this is a quality package.

Graphically, the game attempts to emulate the original game rather than using updated polygonal models or a new graphical engine. As a result, objects and monsters get a bit blocky when you get close to them, just as it should be. Still, with many other classic games getting optional face-lifts on Xbox Live Arcade, it's hard not to wish for a few little updates, like some sprite filtering or an option for true wide-screen support. The menu screens all use the entire width of an HDTV, but once you launch the game, you're staring at the original 4:3 image. The ripping MIDI guitars that made the game's soundtrack so memorable are completely intact, and the game's sound has been updated a bit to take advantage of surround-sound systems.

Playing multiplayer Doom in 1993 was a complete hassle. You could either play two-player games over a modem or play four-player games over a local network. Since there wasn't much of an Internet to speak of back in '93, the game never had full-on official Internet support. The Xbox 360 version of the game offers split-screen support, but it also has multiplayer support over Xbox Live for up to four players, and you can either play deathmatch or cooperatively. One feature you'll notice about Doom's multiplayer is how screamingly fast it is compared to modern first-person shooters. Holding down the left trigger makes you run, and man, that Doom guy can book. Add to that an array of fast-moving rockets and other weaponry, and you'll find that Doom's multiplayer holds up well. That said, we had a few problems staying connected to matches and ran into a few unplayably laggy connections, as well.

Like most every other Xbox 360 game, Doom has achievements to unlock. The most difficult one is to beat every level on the ultraviolent difficulty setting. Beyond that, you'll get points for getting kills on Xbox Live, points for finishing each episode at the default difficulty or higher, finding all the items in a level, and so on.

Doom holds up well and still manages to be fun after all these years. On top of that, there's a lot to it, making it a great value at its $10 price tag. But if you're already certain that you've had enough Doom for one lifetime, this faithful translation probably won't resell you on the game. 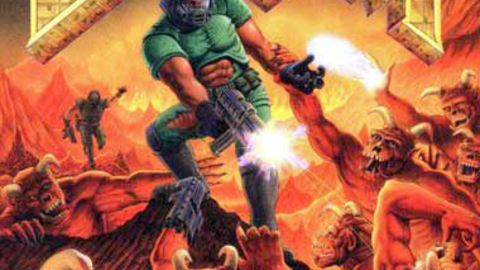