Donkey Kong Country 3 isn't a huge leap over DKC2, but it's still a first-rate platformer with plenty to see and do.

As the number at the end of the title suggests, Donkey Kong Country 3 is the third installment of Nintendo's monkey-themed platform game franchise. Whereas part two introduced a variety of wholesale improvements and upgrades to the DKC formula, the changes that this third game introduces are more low-key. Owners of the previous game will observe that the levels are a little more interesting and that the visuals are a touch nicer this time around. Since the improvements are so subtle, Donkey Kong Country 3 won't blow people away like Donkey Kong Country 2 did, but it's still a first-rate platformer that should satisfy a person's need to jump around and throw things.

Once again, players have to help Donkey Kong's relatives save their island from the maniacal schemes of King K. Rool and his kremling henchmen. This time around, Dixie Kong is the game's hero, and her tagalong sidekick is her baby cousin, a little tyke named Kiddy Kong, who happens to measure in around six feet tall and weighs hundreds of pounds. Gameplay generally involves jumping between ledges, climbing across vines, riding across moving platforms, and pouncing on or avoiding the various enemies that roam back and forth. There are also loads of bonus games and minigames scattered throughout each level.

Dixie and Kiddy function, for the most part, just like Diddy and Dixie did in the last game. Players can still alternate between the two on the fly. Both can jump, pounce on enemies, and pick up barrels--which can be thrown at enemies or used to smash switches and doors. When one character is hurt, they fly off the screen and the other has to handle the level alone until you recover the missing partner by finding and smashing a "DK" barrel. Dixie can use her ponytail to helicopter-spin in midair, while Kiddy has the ability to tuck and roll right through large enemies. The pair can also perform team maneuvers. Kiddy can pick up Dixie and toss her onto ledges. Dixie, meanwhile, can pick up Kiddy and throw him high into the air so that he'll smash through weak floors.

Level designs in this latest game give players more opportunities to interact with the environment than the layouts in the previous game did. Most levels employ the standard mix of platform jumping and enemy bashing, along with the series' trademark rope crawling and barrel cannons, but now there are also switches to pull, walls and floors to smash, small pools to jump into and swim in, and rocket barrels to ride in. There are a few forced scrolling stages too, involving mine carts, snow sleds, and rampaging crosscut saws. Riding on top of and transforming into animal friends once again comes into play. Players can trample kremlings and vacuum barrels with Ellie the elephant, swim and stab underwater enemies with Enguarde the swordfish, fly through the air as Squawks the parrot, create spider webs and tangle enemies with Squitter the spider, and guide a high-flying hummingbird named Parry.

The bosses at the end of each of the game's eight worlds also reflect a little more creativity than the bosses in previous DKC games did. One of the early bosses is a crab, which you have to hit in the mouth with barrels. Problem is, the barrels are situated on a ledge that's out of reach. In order to get to them, you have to jump on top of the boss, run across its back, and leap onto the ledge. Then, you have to carry the barrel to the bottom of the cave and toss it into the crab's mouth without getting pounced on. Taken together, all of these changes help make this third installment the most interesting of the trio, even if much of the actual gameplay is the same.

Following in the footsteps of its two predecessors, the graphics in Donkey Kong Country 3 look nice. The jungle-themed scenery is packed with detail, including scrolling background layers, swaying foreground objects, and various animated rain and snow effects. Most levels are colorful and vibrant, though there are a handful of underground stages that look washed out and murkier than the rest. Many levels feature swimming portions now. The water in these stages looks absolutely stunning, thanks to the combination of multiple background layers and translucency effects. Character animation is fluid and the characters, in general, have a lot of miscellaneous movements that add to their personalities. Some of the new minigames flex the GBA's graphical capabilities, particularly the Swanky's Dash minigame, which takes players through a series of 3D tunnels in a first-person viewpoint, much like the tunnel bonus levels in Sega's classic Sonic the Hedgehog 2.

All of the various sound effects and character voice responses are clear and humorous, but the highlight of the game's audio, as is always the case with this franchise, is its music. Most levels have their own unique background music that reflects the tone of the current world. The music in Lake Orangatanga is tropically flavored, the music in Mekanos is spooky, and so on. Most tunes employ a delightful mix of bongo and steel drum instruments. Fans of the original Super NES game will notice that Rare replaced all of the music in the GBA version with new compositions. The new tunes are just as good as the originals, and in some cases, they're better.

In terms of value, the cartridge offers a lengthy main quest and a decent helping of bonus content. The main quest spans eight large worlds and 48 levels, and it will take players on average about six hours just to reach the last boss. Of course, this being a Rare-developed game, there are multiple collect-a-thon conditions to satisfy while playing the game, which tempt players to go back and collect all of the DK coins, bear coins, and banana birds within each level so as to put a 100-percent indicator on the file-select screen and to unlock a pair of bonus scenes. Sadly, this new game doesn't include the standalone time-attack mode or kremling scrapbook that the previous game did, but you can eventually access and play all four of the main quest's minigames from the main menu. 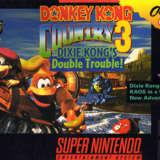 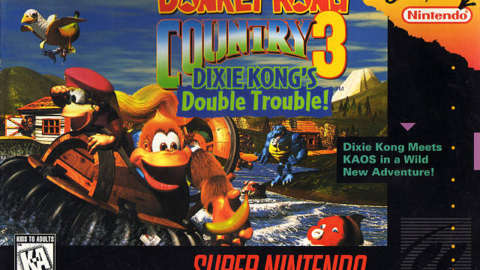 Trouble is brewing yet again on Donkey Kong Island and it's up to Dixie to save the captured Donkey and Diddy Kong and stop the evil Kremlings.