This role-playing/fighting hybrid is more than just fan service: it is a fun and flashy game that keeps on giving.

Fan service? Absolutely. Fun? Unquestionably. Dissidia is a Final Fantasy fan's dream come true, the kind of crossover that's sure to make franchise aficionados giddy. Yet it's far more than just a love letter to series fanatics. Dissidia: Final Fantasy is an exuberant and addictive game in which showy one-on-one fighting and role-playing mingle so effortlessly that it's hard to pull yourself away. And the more you play, the more Dissidia keeps giving, showering you with extra features and in-game rewards as if you were in the center of a ticker-tape parade. The visual drama of battles is unfortunately undercut by some camera foibles, and the feeble narrative is out of step for a series renowned for excellent storytelling. Yet this is a generous package that offers untold hours of over-the-top spectacle that almost anyone can appreciate, even if they've never played or cared to play a Final Fantasy game.

If you are a fan of the series, however, you're probably curious about the story that confines the heroes of Square Enix's famous role-playing game series to a single universe. Heroes and villains from Final Fantasies I-X roam this world, where the gods Chaos and Cosmos have provided the balance that supports reality. When Chaos gains an upper hand, 10 brave warriors clash with 10 nefarious rivals in the hopes of saving the world as they know it. This is your opportunity to revisit old rivals on the battlefield--and to experience some unlikely possibilities. Cloud versus Sephiroth and Tidus versus Jecht are natural choices; but have you considered the idea of pitting Squall against Golbez, or Bartz against Ultimecia? Dissidia's story modes are crammed with such improbable scenarios, though the tale they tell is a disappointing mess of shallow cliches and awkward voice acting, stripping each character to the barest essentials. You'll follow each hero as he or she take parallel journeys, which involve finding Cosmos-curing crystals while occasionally stopping to hear Firion reminisce about roses and Squall grumble about, well, everything. The aftermath of this search is told through an additional story mode called Shade Impulse, in which you can choose your own playable hero in each chapter. And once you complete this story, Dissidia gifts you with even more chapters, more playable characters (it's best to discover who they are on your own), and much more. It isn't an involving tale, but there's a lot of it, and the more you play, the more the game gives you.

While the story won't be enough to captivate you, Dissidia's mix of role-playing and fighting will keep you hooked for some time. In the story modes, you move a battle piece that represents your fighter across a game grid where treasure chests and enemy engagements await. Each move on the grid consumes a destiny point; completionists will want to clear each board of all items and foes without overspending the allotted points, though doing so isn't necessary to progress. It's simply a contrivance (and a good one at that) to move you from one encounter to the next so that you can level up your character, earn funds (Gil, of course) used for purchasing new equipment, and unlock hundreds of new items, moves, and accessories. This constant flow of rewards is the basis of Dissidia's addictive nature. It starts with the promise of a better sword for Cloud and becomes an obsession with unlocking new voice samples for your fighters, multiplayer fighting arenas, and even enhancements to how quickly you receive other enhancements. It's an embarrassment of pleasures.

But even this muscular network of rewards wouldn't be able to support weak combat, and fortunately, Dissidia's fighting system is great fun even when taken on its own terms. You won't find all the subtleties and tight balancing of a traditional fighter, but the combat is vibrant and exciting, and the fighting system is intricate enough to keep battles tense and dynamic. Your attack power is represented by bravery points; brave attacks steal points from your opponent's pool and add them to yours. The higher your bravery total climbs, the more damage you'll do when landing a standard attack. Battles often begin as a nervous dance as you and your opponent spar, trying to pilfer each other's brave points, and then lead to all-out offensive collisions when one fighter gains enough confidence to move in for a heavy blow.

The battle arenas are large, and most offer the freedom of movement necessary for clashes both on the ground and above it. Each character has different attacks whether they are hovering in the air or their feet are planted on terra firma. The swift speed at which you can dash through the air and your ability to grind on rails that wind through most of the arenas lead to liberating and occasionally breathless fights. The beautiful and bright visuals make clashes look extravagant, and culminate with EX attacks. Such attacks are governed by your EX meter, which can most quickly be filled by obtaining glowing cores that will appear periodically on the battlefield. Once the meter is full, you can activate EX mode; if you land an attack while it's activated, you initiate a stunning and colorful burst attack. This initiates an awesome scene that dramatizes the incredible amount of harm your opponent is sustaining, and it's accompanied by a quick-time event that determines how much damage you will do. In many (but not all) cases, a burst attack provides the battle-ending blow. And what a stirring way to do it.

The visual drama of battles is further elevated by Dissidia's cinematic camera, which valiantly tries to frame the action appropriately and does a good job of it in large exterior arenas. It's not nearly as successful in enclosed spaces, however. Claustrophobic stages like Pandaemonium can be a struggle to navigate, and skirmishes take you into corners and near ceilings, where the camera is simply incapable of showing you exactly what's going on. Certain successful blows may initiate a chase sequence, which is a timing-based tug-of-war in which fighters take turns landing or evading a single attack at a time. In some circumstances, the camera will position itself behind a wall or in some other equally unhelpful position during chases. That's disastrous in a one-on-one fighting game; Dissidia should have stuck with expansive arenas. Lunar Subterrane and Order's Sanctuary, for example, are absolute joys to play in and are unfettered by camera issues.

The story chapters offer a lot of bang for their buck just on their own. You won't find as much variety among characters as you would in a traditional fighting game, but the differences are just substantial enough to inspire you to level up multiple fighters. And because you can earn and equip new attacks, individual fighters evolve over time and thus offer a bit of variety even when you're sticking to a single character. But there's a lot to keep you occupied outside of Story mode. There is Arcade mode, which then splinters into multiple sub-modes in which you take on sequences of opponents. In Duel Colosseum mode, you shuffle through various cards to earn loot and equipment upgrades, and fight enemies. And as you'd expect, you can also fight stand-alone battles against AI opponents and other players.

Dissidia doesn't offer online play, but you can take the fight to others in ad hoc mode, using characters you have leveled and customized or an arcade mode character that puts both players on equal footing. As in any fighting game, playing against a buddy can be both more challenging and more rewarding; Dissidia's AI is respectable, but real players can become more attuned to your play style--and are more likely to get distracted by occasional camera issues than the AI, which is completely unhindered by such quirks. You may encounter small bouts of lag at the very beginning of matches and when initiating burst attacks, but the smoothness necessary for an even fight is there when you need it. And if there's no one nearby to challenge to a battle, you can fight ghosts of your previous opponents, which are AI profiles that attempt to mimic their moves.

Fights provide some of the finest displays of visual energy you'll see on the system. Characters move fluidly throughout the arena, and there's a nice feeling of violent contact when your blade finds its mark. Exaggerated animations and boisterous sound effects make every fight feel as if the weight of the world hangs in the balance. Battle stages look mostly fantastic and are based on famous Final Fantasy locales that may have already carved out a place in your own imagination. The frame rate has no trouble keeping up; gameplay is slick and smooth, and the result is a technically impressive game that's hard not to marvel at. And while the story may not amount to much, prerendered cutscenes are staged well, and the opening cinematic is jaw-dropping in the overdramatic Final Fantasy tradition.

Dissidia: Final Fantasy is a joyful experience that piles on the pleasures, within both its gameplay and its feature set. You earn real-time rewards represented by a Chocobo's journey; you can save battle replays, edit them, and export them as video files; and Moogles send you bizarre messages with points included to spend on more unlockables. In other words, there's a lot of game in here, more than some people will know what to do with. It's disappointing that some of the arenas don't seem to have been created with the cinematic camera in mind and that the story seems more like mediocre fan fiction than it does a true Final Fantasy epic. But if you came just for the fun and the frenzy, Dissidia offers plenty of both, supported by a framework of tangible rewards that deepens the more you play. 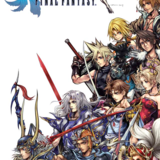