Dishonored: Death Of The Outsider Review

Tying up loose ends in a series focused on political intrigue and all things metaphysical can't be easy. In Dishonored: Death Of The Outsider--a stand-alone game capping off the events of Dishonored 2--it covers the exploits of various side-characters on a more personal quest, that doesn't overstay its welcome. Arkane Studios continues its tradition of coming up with an incredibly inventive and cunning game about elusive assassins making their mark on the world around them, while choosing where and when to make the tough choices.

Set several months after Dishonored 2, Emily Kaldwin and Corvo Attano have since left the isle of Karnaca, leaving Billie Lurk to return to her old ways to track down her former mentor Daud. Pulling from her skills working under the master assassin, they form a plan to confront The Outsider, a deity of the Void realm and instigator of events throughout the series. Billie Lurk will use her newfound powers to sneak, loot, and track down key targets to find a way to eliminate the demigod once and for all.

Much like the previous games, Death Of The Outsider makes effective use of large, open levels. With each city block holding a number of side-opportunities and events, there is plenty to learn and uncover during your excursions. Billie's story aims to round out the narrative presented in both Dishonored games, but the general flow is somewhat lacking. While starting strong, the story eventually runs out of steam, with its final missions falling a bit flat. With that said, there are many details packed in for Dishonored fans, revealing important notes that flesh out the events since the last game.

Billie's approach is a bit different compared to the exploits of Corvo, Emily, and Daud. With no mark bestowed from the Outsider, she is free from the Demigod's watchful gaze, and isn't judged by her overall actions throughout the story. This helps to set the tone for what players can expect in Death Of The Outsider. With the lack of the Chaos System from previous games, the moral ambiguity of the story matches the gameplay, allowing her to go about missions in different and inventive ways--often going for a more improvised style that blends lethal and non-lethal moves.

I tend to be more stealth focused when playing a stealth-action games, and dread the moments when having to mash the reload save key to avoid dealing with lost resources and the bloody mess I left behind. In this game, getting caught isn't as punishing, allowing you to recover from a messy job. With your overall performance graded after each mission--judging times detected, hostiles killed, and items found--you'll be able to focus more on being an effective assassin, without the added pressure of an overarching meta system keeping you in-check.

With gear including lethal and non-lethal darts and mines, grenades, and a stealthy sword--including powers that assist with traversal and the manipulation of your enemies--how you go about your mission is up to you. As an immersive sim, each character and object in the game space can be manipulated, opening up some rather interesting gameplay opportunities--like baiting enemies with thrown bottles to walk into traps, or some more creative options like using the Semblance power to mimic the appearance of others to get the jump on targets.

In a lot of ways, this stand-alone release's more relaxed style does more to compliment the series' immersive sim design compared to its predecessors.

Billie Lurk's overall repertoire of skills are much more lean compared to the other characters. Though Corvo and Emily had a sizable pool of powers, the Captain of the Dreadful Wale has just three, along with a side ability to Rat Whisper--where she can hear the thoughts of nearby rodents to learn clues and tidbits about the characters in the area. With no mark, Billie's powers work on recharging mana, a more than welcome addition that gets rid of mana potions. Despite the smaller pool of powers, she can still acquire and craft a set of Bone Charms to amplify her various skills and attributes.

Focusing on the key areas of traversal, recon, and subterfuge--her powers cover the gamut of what players will need throughout their missions. One power in particular named Foresight, allows Billie to project herself as a spectre to scout and mark targets. This skill is a standout, proving its usefulness time and again when locating Bone Charms and key items. However, the fact that there is only three powers can make the overall gameplay potential feel limited compared to previous games. While creative players can certainly make the best of it, it was disappointing to see that these were all you get. However, completing the game once will unlock the Original Game + mode, replacing Billie's original powers with Blink, Domino, and Dark Vision from Dishonored 2--bringing back a feeling of familiarity.

Dishonored's AI systems are as sharp as ever, and will require some planning to get through unscathed--but going in at full force isn't discouraged if that's your thing. With the more lax gameplay systems on display, there's much more incentive to experiment with the tools at your disposal. During one segment, I used Foresight to mark several targets before using a combination of electric mines and the Disperse teleport ability to plant traps during their patrol routes, disabling several guards within seconds as I slipped away with valuable loot.

Only taking about 7 hours to clear on the normal setting, there are several missions that beg for a revisit, such as the mission to infiltrate Karnaca's Bank--resulting in one of the series' most finely tuned levels. One feature brought in to add more variety are the new contracts found in the Black Market, where you can also buy items and upgrade your gear. Billie can take on a selection of side-jobs from the citizens in Karnaca, ranging from the bizarre, such as killing an annoying mime and making it look like an accident, to the more morbid--like getting revenge on a sadistic doctor who experiments on his patients.

Surprisingly, Death Of The Outsider channels much more of the spirit of classic stealth-action games like the original Thief. Giving room to experiment and prod aspects of the environment to see what works, without too many distractions from the story. Along with a custom game mode, allowing you to tune the game's AI, fail-states, and add in other odd and challenging options like Ironman Mode--Death of the Outsider gives you a number of ways to define the type of stealth-action game you want to play. In a lot of ways, this stand-alone release's more relaxed style does more to compliment the series' immersive sim design compared to its predecessors.

Dishonored: Death Of The Outsider is a solid, inventive, yet somewhat subdued capper to the stories from the previous Dishonored games. While the smaller scope can be felt throughout, the approach to allowing players to express themselves as a master assassin is just as strong as ever. It's uncertain where the series can go from here, but this stand-alone release proves that Dishonored is still a remarkably designed stealth-action game with much potential, that offers players the chance to be creative in ways they'd least expect.

View Comments (96)
Back To Top
8
Great
About GameSpot Reviews 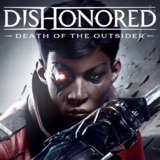 Dishonored: Death of the Outsider
Follow
$19.00 on Walmart
Buy

Alessandro is an admirer of the Dishonored series, and usually chooses the stealthy and most non-lethal approach--but will make exceptions if a particular target deserves a far more brutal fate. If getting a target's comeuppance means throwing them off a balcony or feeding them to the rats, then he will gladly make it happen. GameSpot was provided a complimentary copy of the game by Bethesda for the purposes of this review.