Just like the first Disgaea, this strategy role-playing game is best suited for fans of other stuff like it, and it's chock-full of depth, lasting value, and surprisingly good humor.

Has it really been three years since the first Disgaea? Though Nippon Ichi Software's memorable cult classic was unmistakably similar to other strategy role-playing games like 1998's popular Final Fantasy Tactics, it had its own weird, goofy style and many nuanced gameplay twists that made it unique. Now Disgaea is back in a sequel that really doesn't mess with a successful formula. It's got a great new story and a ton more missions and content, but it's fundamentally very similar to its predecessor. While too much familiarity might be a bad thing for sequels to games with a lot of room for improvement, somehow it's just as satisfying and rewarding to play through Disgaea 2 now as it was to play the previous game years ago, provided you're not looking for a completely new experience. There's just so much charm and wit to the presentation, and so many interesting ways to play through the game's turn-based battles.

Like the original, Disgaea 2's anime-inspired, lighthearted characters and storyline are playfully self-referential. The game turns out to be connected to the original, so fans may look forward to seeing some of their favorite characters back in the sequel. However, this is a self-contained story that doesn't require previous knowledge of Disgaea. The main character is a confident young man named Adell, who seems to be the only human remaining in a town that's become infested with monsters. Apparently it's all the doing of one Overlord Zenon, who's cursed the people to lose their consciences as well as their memories (hence the game's subtitle). So Adell intends to find Zenon and beat him down. At the beginning of the game, Adell's mom attempts to facilitate this by performing a summoning ritual intended to make Zenon appear right then and there. Things don't go quite as planned, though, and out pops an attractive, haughty young lady claiming to be the Overlord's only daughter. Now Adell and the gun-toting Princess Rozalin must venture forth together in search of the Overlord, each for their own reasons.

Disgaea 2's story strikes a fine balance between coherence and pure silliness. There are fully voiced story sequences both before and after most of the game's dozens of missions, divided into more than a dozen episodes. Along the way, Adell and Rozy will reluctantly (and predictably) grow to like one another--and they'll meet up with a strange yet likable supporting cast, including a French-accented, slightly lascivious flying frog, a washed-up intergalactic celebrity looking to regain his former stardom, a polite ninja girl looking for excuses to honorably end her own life, and more. The story plays for laughs almost constantly, and it frequently succeeds. The game's colorful anime art style and many suggestive jokes won't be to everybody's liking, but there can be no denying that Disgaea 2's story is filled with humor and delivered with much enthusiasm. It's very similar in tone to the story from the original Disgaea, but for better or worse, the hero isn't a mean-spirited, spoiled little brat in this case.

From a gameplay standpoint, Disgaea 2 plays just like the original. It would be difficult to pick the gameplay tweaks out of a lineup, but they're there to help give you more stuff to play around with (like cell phones for mid-battle pizza deliveries...seriously) and the game plays a little faster than before. Once again, you'll get to run around in a little hub area before each mission, buying new gear for your characters and chatting with various sometimes-helpful creatures, but the brunt of the game consists of a linear sequence of turn-based strategy missions. A typical mission requires you to defeat all opposing characters on the map by deploying up to 10 characters of your own. The familiar-looking isometric perspective and basic properties of other strategy RPGs all apply. For instance, enemies are more vulnerable if attacked from behind, and a balanced party of close-combat specialists, ranged attackers, and magic users tends to be the safest bet for any new encounter. Your characters all level up as they fight, becoming stronger while gaining new skills and abilities. Many different character classes will become available as you play, so eventually you can marshal squads containing warriors, geomancers, samurai, gun-toting cowboys, demonic penguins, thieves, and more. Building the perfect squad is a never-ending and interesting challenge.

Pizza deliveries and demon penguins notwithstanding, such gameplay elements are conventional to most strategy RPGs. Where Disgaea 2 breaks the mold, like its predecessor, is through the use of a number of absurd but intriguing twists that force you to adopt some decidedly unconventional tactics. For instance, it's possible for characters to use their turns lifting each other up on their shoulders; you can form a tall column of characters, who each can then throw one another across the map as part of the same turn (or you can make them attack from this position). There's also the game's "geopanel" system, which makes it so that certain colored spots on a map may confer a variety of special effects on whoever's standing there--or, in some cases, prevent passage altogether. If you can get to a colored panel's power source, you can transfer these effects or destroy them altogether. Be careful, though, as the power sources can now sometimes get up and walk around on their own. Their effects range wildly, from being very beneficial (invincibility!) to being very dangerous (enemies gain a bunch of levels each turn). Ultimately they help introduce a lot of variety while adding multiple layers of complexity to some of the later missions in the game.

Another very interesting aspect of play is that you can move your characters in any order, and choose either to execute queued orders or end your turn at any time. Since characters can dish out powerful team attacks when they're in close proximity, it's possible to use this feature to make your individual characters do much more in a given turn than just move once and attack once. Also, since you'll be dealing with a larger-scale fight than in most strategy RPGs, it helps that during the enemy's turn, all foes will make their moves simultaneously before attacking in sequence. Because of the various counterintuitive complexities of the combat, Disgaea 2 is clearly targeted at experienced strategy RPG players. However, the game's interface is streamlined and well designed to put a great deal of information at your fingertips, so while it may be difficult to wrap your head around all the data at first, the system works well.

It'll probably take close to a good 40 hours or so to get through Disgaea 2's main storyline, but that's not the end of the road. Like the previous game, Disgaea 2 does a great job of tapping in to the obsessive drive for hardcore role-playing fans to keep leveling up and exploring every nook and cranny of the gameworld. Characters may reincarnate into other character classes, inheriting some of their previous abilities, and may rise in level up past the hundreds and clear into the thousands. It's almost crazy how the system scales up, but you truly get the impression that your characters keep getting stronger and stronger for a very long time.

What's more, you can even level up every individual item in the game, from a sword to a pizza, by entering randomly generated dungeons that are part of the Item World. Here one of the game's new but relatively minor features surfaces, as it's possible to visit the Dark Court and be convicted of a felony...which is a good thing in Disgaea 2's demon-infested world. As in the previous game, you may also propose various treaties before the demonic Dark Assembly, then attempt to bribe the senators to sway their votes...or even beat them into submission--but watch out, they're tough. You can also replay every story mission as many times as you wish (they're often a little different if you go back to them outside of the story) and find a number of optional dungeons to fight your way through.

Disgaea 2 looks just like its predecessor, but since the visuals feature so many nicely drawn, smoothly animated 2D characters, the passing of time hasn't hurt the look of the game at all. Spectacular special effects are used for different characters' spells and abilities, and many of them are so playfully over the top that they're really fun to watch. As in the previous Disgaea, some of the maps, especially the randomized madness of Item World, can be difficult to orient yourself in, especially when you've got a bunch of characters cluttered together. It's also too bad that defeated characters simply disappear in a puff of smoke; but those are about the only knocks against a very good-looking, if low-tech, game.

A fittingly whimsical soundtrack is there to help poke fun at everything that's happening throughout the story, and the English voice acting is mostly great, helping bring life to a lot of wild characters. It helps that the English localization is so well done. Though some of the humor may seem a bit lost in translation from the original Japanese, most of it comes through loud and clear. As in the original Disgaea, even the item descriptions in Disgaea 2 are surprisingly funny. For good measure, Disgaea 2 features a Japanese-language option if you're curious to hear how the flying frog sounds in his native tongue.

In terms of gameplay, the new stuff in Disgaea 2 consists of relatively subtle changes and additions that you might not notice unless you compared the game side by side with the original. However, the most important thing is that the formula still works great, and at least as much if not more care went into the storyline to help keep things moving along. So if you've enjoyed strategy RPGs in the past, get ready for dozens of hours of quality entertainment from this one, both on and off the battlefield. Or if you're new to this style of gaming, Disgaea 2 would make for a very strange starting point, but it would still make a good one. 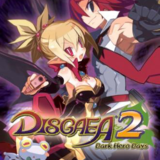