This expansion is a reasonably good deal, but it's best suited for the hard-core Disciples II fan who wishes to play every single official scenario for the game.

Though you can find plenty of fantasy-themed turn-based strategy games on the shelves, last year's Disciples II is still one of the most distinctive and one of the best. Featuring some unusually detailed and stylized artwork, the game also incorporates many role-playing elements to lend continuity and an epic feel to its campaigns. Now, about eighteen months after its release, Disciples II finally gets a well-deserved expansion pack. Two, actually, since Guardians of the Light is being closely followed by the similarly styled Servants of the Dark expansion. However, Guardians of the Light isn't very substantial. It's halfway suited to new Disciples II players, who could just as well pick up a dirt-cheap copy of Disciples II from their local bargain bin, and it's halfway suited to experienced Disciples II players who would probably expect more from this add-on than what its dozen-odd skirmish maps and two high-level mini-campaigns provide.

The Guardians of the Light expansion only lets you play as the good-aligned factions of Disciples II: the Empire and the Mountain Clans. The Undead Horde and the Legions of the Damned, Disciples II's evil factions, are still present as adversaries, but cannot be controlled directly. As you'd expect, the Servants of the Dark expansion is the exact opposite. This is a strange design that simply limits the appeal of both games, since one of the great things about Disciples II was in how you could play from the perspective of four dramatically different and uniquely powerful sides.

This add-on actually contains the complete original Disciples II campaigns for both the Empire and the Mountain Clans. That's a lot of content for players new to the series, though again, they might as well just look for the original game since it's even cheaper now than this budget-priced expansion pack. Meanwhile, those who already own Disciples II have already seen this stuff.

The main reason the original campaigns are in here is because the new high-level campaigns may only be played if you have a leader character of 10th level or higher. So unless you've finished the original campaigns and still have the saved data on your hard drive, unless you've downloaded someone else's saved game, or unless you happen to look down in the game's readme file to find the clause about how some high-level leaders are hidden on one of the game discs' directories, this means you'll need to play through the original campaigns before you can get to the new content. The scenarios comprising the two new mini campaigns are very challenging and filled with little scripted events, so they're good as Disciples II missions go. They let you fight with and against many of the game's most powerful units, which were a relatively rare sight in the original.

Other than that, Guardians of the Light offers 15 new stand-alone scenarios, though in keeping with the theme, these only let you play as the good-aligned factions (unless you also end up buying the Servants of the Dark expansion). These new missions essentially are more of what Disciples II fans have come to expect from the game, and aren't noticeably better or different from the scenarios that shipped with the original game more than a year ago.

Guardians of the Light looks identical to Disciples II, which looked superb when it was originally released, but was limited to 800x600 resolution. However, the expansion supports resolutions up to 1280x1024 for the map screen, and you can also choose to have the graphics for the menus and combat stretch to fill the screen in the higher resolution modes, which helps keep the visuals looking fresh. The character art and combat still looks great after all these months, but it can still be difficult to spot enemy units or key features on the overhead map. A few new characters have been added and the graphics for the Empire's and the Mountain Clans' capital buildings have been redone, but these are minor details. Disciples II's audio has held up fine, and to its credit, Guardians of the Light adds some good, new music tracks to the mix. There's no new voiceover for the missions, however. But there is a sort of multimedia gallery that lets you look at some of the artwork from the game, if that's any consolation.

This expansion also features some gameplay enhancements over the original release of Disciples II, which have been available already via free downloadable patches. You can auto-resolve combat if you don't want to sit through the lengthy animations in a battle that's a sure-fire victory (or defeat), and the AI of the game handles alliances and certain other situations more capably. Disciples II was a notoriously difficult game, but now the "easy" setting is considerably more manageable. Guardians of the Light also includes the Disciples II scenario editor, allowing players to put together their very own maps and quests. The box advertises a "random map generator," one of the most-wanted features from the original Disciples II, but this is really just a way to quickly create some terrain for a custom map and populate it with monsters and treasure. You'll need to actually tune and balance the map yourself, and since the scenario editor is a separate executable from the actual game, this random map generator really isn't practical for the average player.

Disciples II is still a great game at its core. The highly streamlined combat and the memorable units and factions still make for some entertaining and addictive gameplay. As such, the Guardians of the Light expansion is partly suited just as a reminder for you to go back and play some more Disciples II, or pick up a cheap copy if you missed out on it. On its own merits, this expansion is a reasonably good deal, but it's best suited for the hard-core Disciples II fan who wishes to play every single official scenario for the game. 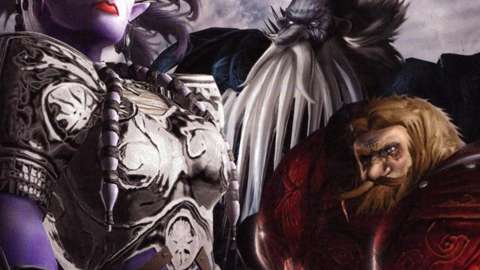 Disciples II: Guardians of the Light

This expansion is a reasonably good deal, but it's best suited for the hard-core Disciples II fan who wishes to play every single official scenario for the game.

8.2
Sign In to rate Disciples II: Guardians of the Light