Wielding more Wii Remote-waggling moves than you can shake a quake at, Disaster's lack of clear gameplay focus has resulted in a game that is competent at best and never compelling.

In Disaster: Day of Crisis, spiky-haired protagonist Ray has to overcome floods, fires, a hurricane, an earthquake, a tsunami, two volcanic eruptions, and even an attack from a bear. And there are as many different gameplay styles in Disaster as there are natural calamities. Practically every Wii Remote-waggling gimmick dreamed up for the Wii (so far) has been thrown into the mix, resulting in a game that's unfocused and scatterbrained.

If you think the laundry list of natural disasters Ray faces in Disaster sounds like a pastiche of bad Hollywood movies, you'd be spot-on. The game certainly has cinematic aspirations, with its over-the-top story told through long and frequent cutscenes interspersed amongst the action. And not only are there enough calamities to send Roland Emmerich into fits of ecstasy, but there's also a terrorist threat: Ex-Marine and now rescue team member Ray has to deal with a group of disgruntled army veterans who have stolen two nuclear warheads. Not that our heroic Ray cares much about that. His main motivation throughout Disaster is to rescue the sister of his dead rescue team partner from the terrorists. The game's dialogue is cheesier than a wheel of cheddar, and the big set pieces are straight-up Michael Bay fever dreams, but it is this relentless absurdity that lifts Disaster's story to "so bad it's good" material. After all, if you don't think an attack chopper getting taken down by a tsunami or our hero getting attacked by a bear as he's trying to escape a volcanic explosion is cool, then you need to redefine your sense of awesome.

What's not so awesome is the constant chopping and changing when it comes to gameplay. Part on-rails shooter, part arcade racer, and part a collection of Wii Remote-based minigames, Disaster is a disjointed experience that has some competent sections but no compelling ones. There are several good concepts here that are woefully underutilised--victims of Disaster's everything-and-the-kitchen-sink approach. The most apparent one is Ray's health system. In addition to having the typical hit points and stamina bar, the system features a heart-rate meter and a lung indicator. If you run too much, Ray's heart rate increases, forcing him to stop. Hanging around in smoky environments will cause Ray's lungs to gradually degrade, and you'll have to find an area with clear air or risk having Ray collapse. Neither of these features is used to any effect in the game; the only time you'll need to be mindful of the lung indicator is late in the game in a level that's set in a smoky forest. The heart rate meter is even less relevant, because at no time will you need to worry about Ray running out of puff.

Most of your time in Disaster is dedicated to its on-rails shooter side, which has a Time Crisis vibe to it thanks to the ability to take cover from enemy fire. Taking cover by pressing the Z button on the Nunchuk makes you invulnerable to enemy fire, although large explosions (such as those from RPG-wielding baddies) can still hurt because of their splash damage. Aiming is as simple as pointing the Wii Remote at the screen, while reloading is done by shaking the Nunchuk. You can carry four different weapons into battle, which can be selected on the fly using the remote's D-pad. Weapon variety isn't a strong point--while there are more than 15 to choose from, many of those are just slight variations (such as firing speed) of the same weapon. Shooting sections are easy for the most part since red reticles will appear on enemies when they're about to fire (once again, like in Time Crisis). And just like in every other light-gun-based on-rails shooter, enemies don't seem to care much about self-preservation and will often stand in the open waiting for you to pop out and shoot them.

When you're not shooting, you'll be navigating disaster-ruined locales, avoiding dangers and helping out any survivors you find in your path. It's here that Disaster's mountain of mixed gameplay comes in, throwing in new controls seemingly every few minutes, many of which get used only once in the entire game. Running away from a raging fire in a subway, for example, requires you to rapidly waggle the remote and Nunchuk. Avoiding obstacles while being swept away in a flash flood sees you having to quickly wave the remote left or right. Using a parachute has the remote and Nunchuk acting as steering toggles to change the angle of descent. There are plenty of these events in Disaster, and none of them are tough. Dealing with survivors is handled in the same minigame style--running across a stranded person in Disaster starts one of several different games. One requires you to wash away dirt from wounds by pointing the remote at the affected areas and then to wrap the injuries in bandages by rapidly twirling the Nunchuk joystick. Another sees you mimicking CPR by rapidly waving the remote down in time with a person's heartbeat. Some are as simple as waving the remote once to reach out to people hanging from ledges or rapidly pressing the A button to lift a heavy object off a victim. All of these actions have to be performed within a set time limit, but the game is extremely forgiving, and you can simply try again if time runs out. The only challenge is in finding the survivors, because some are more difficult to reach than others.

Finally, Disaster also dips its toes into arcade driving. In several instances Ray commandeers a vehicle in order to catch or avoid bad guys or to flee from natural hazards, such as the blast wave from a volcano's explosion. These driving scenes are controlled by holding the remote sideways and using it to steer--the 2 button is for accelerating, 1 is for braking, and A is for handbrake turns. This control scheme doesn't allow for much finesse, so most driving sections are either too easy or too frustrating (particularly since the cars Ray drives have a laughable tendency to flip over at the slightest bump).

Disaster is not a great-looking game, even for the Wii. Textures and environments are rather bland, which is a pity since the game could have looked much more vibrant with all the explosions you'll encounter. Character models are fairly lacklustre and are more reminiscent of late-era PlayStation 2-quality graphics than the sharper, more vibrant visuals of many Wii games. Sound is also poor, particularly when it comes to the unconvincing effects you'll hear. The sound of Ray's shoes is particularly annoying--it sounds as though he's wearing tap shoes most of the time, and the awful clacking noise when his boots hit concrete is certain to drive you batty.

That's not to say the game is all bad in the looks department. Some scenes of immense destruction--such as buildings collapsing practically on top of Ray--are impressive. But that's the problem with Disaster: Day of Crisis. The good is generally overshadowed by the mediocre, leaving you with a game that has potential but never comes close to realising it. It's fun in parts, but as a whole, Disaster is no earth-shattering experience. 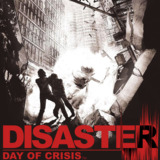 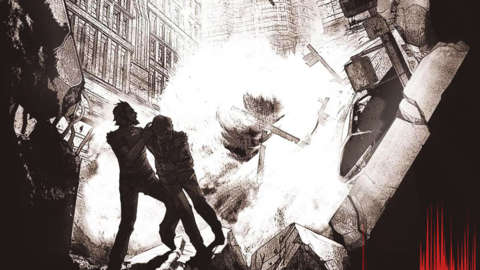 Disaster: Day of Crisis has you racing to survive against a variety of natural catastrophes in a short period of time - and amidst the chaos, a rogue special forces unit has seized a nuclear weapon, which you must recover.