As a graphical showpiece, DiRT is an unbridled success. It also happens to be an entirely enjoyable rally racer.

Fans of Codemasters' Colin McRae rally racing series are in for a surprise with the publisher's newest title, DiRT. DiRT has more in common with Digital Illusions' Rallisport Challenge series than the Colin McRae games of old, putting a greater emphasis on a variety of off-road racing disciplines, as opposed to sticking hard and fast to traditional rally racing. That's not to say that rally fans will be disappointed with the game. DiRT veers a good bit further into arcade territory than earlier games in the series, but it is still a blast to drive, and absolutely stunning to look at.

Let's just address that elephant in the room right off. There have been plenty of driving games of late that have been visually impressive, but very few live up to the visual fidelity displayed by DiRT. This game is a technical achievement in car design, track design, and damage modeling. To begin with, the cars are beautifully rendered, highly detailed models that are as fantastic to look at as they are to destroy. Damage modeling is one of the most impressive aspects of the game; you can lose bumpers or doors, break glass, tear up the paintjob, and roll your ride into a crushed, deformed mess. Tracks are equally beautiful and destructible. From the rain-slick tarmac tracks of Japan and the dusty backroads of Italy to the muddy, gravelly countryside of the UK, DiRT nails every environment wonderfully. The game also uses lighting to fantastic effect, not just to emphasize how shiny and reflective the cars are, but to give each track an individual atmosphere. Driving around desert mountains in the washed-out haze of late day is an amazing sight to behold, for sure. And if you feel like tearing up these tracks, you can bust through fences, barriers, bushes, and anything else not held to the ground with concrete. All the while, dirt, mud, or gravel will kick up against and often stick to your car, making the game's namesake seem entirely appropriate.

As amazing as the game looks, all that detail comes at a bit of a price. Performance is not always up to snuff, especially in races with multiple cars on the track. The frame rate is a little choppy during single-car rallies, but once you get a group of other cars racing with you, the game practically turns into stop-motion animation, especially if all the other cars happen to be bunched up with you. This is more of a consistent issue on the 360 version, though the PC version is highly taxing even on high-end hardware, so you're likely to run into some performance problems unless you're running a top of the line machine. Longer-than-average load times also tend to rear their ugly head (primarily in the 360 version). Even still, the game never becomes unplayable because of the crummy frame rate or lengthy loads, and at worst, these are merely annoyances.

The quality of the presentation doesn't begin and end with the in-game graphics either. Even the menu system is immaculately built. It's hard to describe it, except to call it a bunch of floating boxes with selectable options that zoom in and out as you select them. Even the loading screens are cool because they display real-time statistics on your game, such as your favorite tracks or vehicles, your average speed, and even your favorite driving surface. Menus are usually a forgotten element of a game unless they're specifically bad, so the fact that DiRT's are notable for how good they are says something.

Audio is not quite as immediately impressive as the visuals, but it is great all the same. Engine noise is probably the best aspect because each car has a definitive and unique sound to it that feels just right. Crashes and other racing effects are also excellently produced. The soundtrack isn't licensed, but the instrumentals that play over the various menus and replays are quite solid. The only damper on the category is your codriver, an obnoxious, bro-sounding dolt whose dialogue sounds like it was written by a nonnative English speaker and whose only reference for the language was reruns of Saved By the Bell. Lines like "Smooth and steady; I'm Mr. Smooth, and you're Mr. Steady," and "Yeah! We won the championship! I'm so stoked!" are funny once, but then they're annoying from there on out. At least he gives you some good info on the tracks before you race.

Once you've snapped out of the trance that DiRT's fantastic presentation tends to lull you into, you might remember that this is a racing game and that you do actually have to play it. It's a good thing it's a fun one. The game includes six different racing disciplines, which consist of rally, rallycross, hillclimb, CORR, crossover, and rally raid varieties. If you don't know what half of those are, don't fret. The game does a good job of easing you into the game's style of racing, with both some rather simple early races, as well as an explanatory narration by extreme sports maven and current Rally America champion Travis Pastrana.

Granted, even if you've never jumped into a CORR race in your life, DiRT isn't exactly a difficult game to grasp. You're racing down a course by yourself, trying to get the best time possible, or racing against other cars, buggies, or trucks on dirt and tarmac tracks. Most of the differences in gameplay come from how the various vehicles handle. There is obviously a big difference between driving a speedy Mitsubishi FTO and a massive racing big rig (yes, they actually have those). But even with all the differences among disciplines, the racing is always easy to pick up and play. DiRT has a decidedly arcade-driving sensibility that makes all the vehicles relatively easy to race with from the outset. Once you've gotten a feel for how all the different cars and tracks feel, you can simply crank up the difficulty, which in turn makes your opponent racers much more adept, and also leaves your car far more open to terminal damage. On the highest setting, all it takes is one good front-end collision to send you packing.

As realistic as the damage incurrence can be, the rest of the game definitely maintains an arcade mentality. Nearly all the vehicles have a decidedly floaty feel to them, one that seems to overcompensate for nearly every minute turn of the analog stick (if you're playing the PC version, you will need a dual analog controller of some fashion to play the game properly). It's not unmanageable or anything, but it's far from realistic. By the same token, the game's physics are often a bit silly, especially in wrecks. That's not an insult by any means because the exaggerated physics lead to some absolutely spectacular wrecks in many cases. But there are some eye-roll-worthy moments where you'll see a car tilt from lying on its side all the way back upright for no good reason or drive sideways up a cliff to land back on four wheels.

Floaty feel and wonky physics aside, DiRT is still a great deal of fun to play. Once you get a feel for the controls and up the difficulty a bit, the racing can be intensely challenging, addictive, and immersive. It's especially immersive if you happen to take in one of the game's two exceptionally good cockpit camera views. There's a zoomed-in view and a view that's a bit further back. Both views give you a great sense of being in the driver's seat, even going so far as to let you look around inside the car via the right analog stick. Not enough racers do the cockpit camera that well, and DiRT is worth lauding for doing it especially well.

As fun as the racing can be, it wouldn't be worth much if DiRT didn't offer up plenty of ways to experience it. Fortunately, it does the job. Apart from being able to take part in single races and events, as well as a series of championships, consisting of multiple races each, DiRT also has a lengthy, involving career mode that has you working your way up a literal pyramid of events. Winning races earns you points, which unlock new tiers of the career mode and cash, which you can use to buy new vehicles or liveries for said vehicles. With more than 60 career events, nearly 50 vehicles to unlock, and more than 180 liveries to buy for those vehicles, that ought to keep you busy.

The one feature that DiRT skimps badly on is multiplayer support. There is multiplayer, but just barely. Only two disciplines--rally and hillclimb--are available to play in multiplayer. But wait, aren't those the two disciplines that don't have you competing directly against other cars? You bet. Essentially, you're dumped into a lobby with potentially dozens of other players, and from there, you vote on which track you want to play. The available list to vote on is always random, and there's no option to pick a different car or even search for a lobby with specific cars/tracks available. Once you're in a race, it's merely a time trial against all the other players. You can see how you're doing in the real-time standings, but that's all. While the Colin McRae series has never been known for great multiplayer support, the total lack of online racing in a game that debuts several wheel-to-wheel racing types is a gigantic tease and really disappointing.

That said, the multiplayer support is really the only thing about DiRT you can call truly disappointing. On every other front, DiRT delivers a racing experience that's a lot of fun to play and visuals that are such a joy to watch that you can even bring yourself to forgive the shoddy frame rate. All around, DiRT is a class act, and it belongs in any racing fan's library.

View Comments (1)
Back To Top
8.3
Great
About GameSpot Reviews 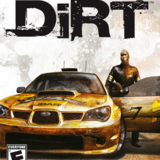