It's an arcade-perfect port of Dig Dug, an experience that still stands up well enough, but easy achievements and a lack of additional features keep it from lasting.

Namco Bandai continues to mine its library of arcade classics with Dig Dug for Xbox Live Arcade. Similar to the XBLA releases of Namco notables Galaga and Pac-Man, Dig Dug looks, sounds, and plays like it did in its original arcade cabinet. As pleasing as it is to have such a solid version of Dig Dug to play at home, it's a no-frills package, and once you've torn through the far-too-easy achievement points, there's not a lot to keep you playing.

Though it didn't seem particularly strange as far as arcade games went at the time, in retrospect Dig Dug had a pretty weird concept. As Dig Dug (whose proper name, for those hardcore enough to care, is actually Taizo Hori), you're placed in the middle of an underground playfield littered with rocks and monster-filled chambers, with the task of eliminating all the monsters. You automatically create new tunnels simply by moving around. Connecting your tunnels to a monster-filled chamber is a surefire way to get those monsters to give chase, though they also have the ability to phase through the solid earth into unconnected tunnels and chambers without creating new tunnels.

One way to eliminate the goggle-clad Pookas and flame-spewing Fygars is to create a tunnel underneath one of the subterranean rocks and then step aside as the rock proceeds to fall down the tunnel, crushing any monsters that are in the way. Dig Dug also comes armed with what looks like a harpoon attached to a bike pump; you can hurl it at nearby monsters and then inflate them until they pop. And that pretty much sums up what Dig Dug is all about--two types of enemies, two ways to eliminate them. The color of the playfield and the placement of the chambers change as you advance, and the monsters become faster, more aggressive, and more plentiful, but the basic gameplay remains the same--and it's still quite fun.

The game has a very iconic look to it, thanks largely to the high-contrast strata of dirt that makes up the playfield, though the sprites for Fygar and Dig Dug himself haven't aged quite as well as Pooka. The graphics haven't been updated at all, but the presentation is enhanced by the really crisp, stylized cabinet art that flanks the playfield. The memorable electro-banjo music is still as urgent as ever, and it still does that neat little trick of pausing whenever Dig Dug isn't in motion.

When used correctly, Xbox 360 achievements have the capacity to breathe new life into a familiar game, but Dig Dug botches this by making the achievements much too easy. There are a few achievements to earn by dropping a rock on a number of monsters at once, and one for digging out every last bit of dirt on the playfield, but the rest of the achievements are awarded for collecting the different point-bonus items. You'll need to advance into the high teens in order to earn all these achievements, and the game really starts to get diabolical around level seven. Like the XBLA versions of Galaga and Pac-Man, Dig Dug lets you start a fresh game from the highest level you've reached in past games, so it's mostly a matter of just grinding it out--and an experienced Dig Dug player could easily earn all 200 points in less than an hour.

The inclusion of online leaderboards does a little to compensate for the easy achievements and the omission of the alternating two-player mode that was found in the original arcade version, but beyond the simple pleasure of treating underground-dwelling monsters like balloon animals, Dig Dug doesn't offer much incentive to keep coming back for more. 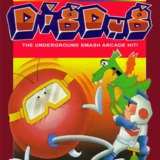 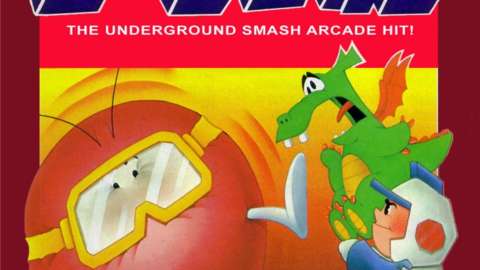 Pump up Pooka and Fygar in this Atari 2600 version of the Namco arcade classic.