Diablo is the best game to come out in the past year, and you should own a copy. Period.

Every now and then a game comes along that is so simple and addictive that it affects the way that video games are made forever. Games like SimCity, Populous, Dune II, and Doom all changed the face of computer gaming for years to come. Now Blizzard, the company that refined the real-time strategy game to near perfection, has unleashed Diablo, a title that combines the elegant simplicity of an action game and the addictive storyline of an adventure game with the personalization and exploratoration of an old-school RPG.

As with the golden RPG titles of yesteryear, Diablo's premise is very simple: Find evil things and smite them repeatedly. The tricky bit comes in deciding just how to smite them, and how to do it without getting seriously killed. Each of the game's three character classes - the warrior, the rogue, and the sorcerer - has a different approach to combat, and different specialties that make life easier overall. Super-strong and resilient, the warrior is able to use a great many weapons that his colleagues can't heft and can wade into battles without fear of being struck down in the first few seconds of the fight. Rogues are masters of the bow; their superior dexterity enables them to strike from afar with unerring accuracy. Sorcerers depend on a variety of powerful spells to destroy large numbers of enemies from a distance, keeping their frail frames far away from possible harm. Each different class of character suits a particular style of play: Action fans will most likely want to scrap up close with a warrior, while strategy fans will find the strike-and-move tactics of the sorcerer and rogue more to their liking. It doesn't really matter - it's all very, very cool.

Cooler still are the amazing variety of items, magic, and monsters encountered while tackling the game's many quests. Like Sword of Fargoal and The Wizard's Crown (old, old, OLD, RPGs), Diablo features magic items and weapons with random powers and properties. Names like the Jade Bow of the Moon denote more than just a valuable find; jade indicates an item that helps the player resist all forces (fire, electricity, etc.), and “of the moon” shows that the arm will increase all of a character's attributes. Since all of this is random, players are constantly given the promise of discovering the “ultimate” weapon or armor with each open chest or slain enemy. Similarly, although a set number of monsters is included, only a few will be seen during each full game. This means that players going back for their second or third shot at the game will very likely fight opponents they haven't seen before. Talk about replay value.

Those who do get tired of Diablo will find a whole new realm of excitement in network and Battle.net play. In both modes (all it takes to play Battle.net is an open Internet connection and a copy of the game) players can work with (or against) three other players while solving quests and fighting evil. Although facing off against large numbers of enemies can get pretty tricky - as a sorcerer I had a horrible problem with shooting my warrior companions in the back with some particularly nasty spells - this group play adds hours of play life to the title. On Battle.net be prepared to run across the dregs of virtual society, from player killers who slay others for their gold, to more clever sham artists who lure players into dangerous areas and then collect their items after they're killed by the local beasties. Watch your back.

There's plenty more that's great about Diablo - it features a fantastic soundtrack reminiscent of early Bauhaus albums as well as randomly determined quests and subquests - but there's no reason to write about it here. Diablo is the best game to come out in the past year, and you should own a copy. Period. If you like PC games, you should go out right now and experience what is likely to be the clone maker for the next two years. 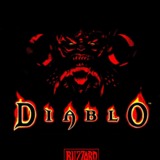