This first-ever English release of Soul Hackers shows its age, but the patient player will find a deep and rewarding experience.

The Shin Megami Tensei series has been running strong in Japan for quite some time, though it has gained a lot of traction stateside only in the last decade. Shin Megami Tensei: Devil Summoner - Soul Hackers was originally released in Japan on the Sega Saturn in 1997 and then on the PSone two years later. Now, in 2013, it is being released in English for the first time on the Nintendo 3DS. It's important to note all of this, because Soul Hackers feels as though it were plucked directly from the heyday of 32-bit and squished down into a 3DS card--for all the good and the bad that entails.

The game takes place in the fictional Amami City in Japan, an experimental, always-connected metropolis built around the latest and greatest Internet-driven technology. The newest thing Amami residents have to look forward to is the closed beta test of their city's own virtual world, Paradigm X. Your character is a member of Amami's premier hacker collective, the Spookies, and you start the game by scoring an illicit beta key to Paradigm X. But when you go to test-drive the service, you're instead met by a strange being and given a vision of a man's dying moments during a secret mission to retrieve data from a demon-infested building. Before you know it, you are in possession of that man's special demon-summoning computer--and a strange presence calling itself Nemissa is possessing your girlfriend's body. It's up to you, Nemissa, your hacker pals, and underground networks of demons and summoners to uncover the shady secrets under Amami City's shiny veneer.

Soul Hackers' aesthetic and theme are firmly rooted in the Internet of the late 1990s, a time when everyone was excited about "cyberspace" and the potential it held. Many of the thematic elements in the game--open virtual worlds, mass interaction, and even virtual currency exchange--have long since become reality on our own PCs and consoles, making the story's then-forward-looking world of Paradigm X seem dated yet highly endearing.

Unfortunately, the game tends to look like it's straight out of the 1990s as well. The first-person dungeons are basic-looking, with crude, blocky polygon models for many elements. Battle sequences offer extremely limited animations for enemies and nondescript background imagery. Prerendered CG cutscenes and attacks look primitive and artifact-laden, as though they were ripped straight from the original Soul Hackers discs. It's quite disappointing that there aren't more visual touch-ups beyond the addition of 3D. Though the late-'90s aesthetic is fun, sprucing up the animations or background models a bit would have been a nice step toward making Soul Hackers' interesting world more appealing.

At least the story and dialogue scenes still look decent, and they're fully voiced to boot. In fact, almost all of the story dialogue in Soul Hackers, major and minor, has voice acting to accompany it. It's a nice touch to the gameworld, though it does get a little weird when shopkeepers constantly ask and re-ask you what you want to do each time you visit them.

Outside of the story sequences, however, you spend most of Soul Hackers exploring the aforementioned dungeons. You traverse these stages from a first-person viewpoint, exploring to find items and clues. Oftentimes, you need to solve a puzzle or find a hidden trigger to open a door or reveal an important item. While some of these "dungeons" are typical buildings and industrial facilities, the areas in the virtual world of Paradigm X are more interesting and surreal. The layouts of these areas quickly become complex and challenging, and some of the puzzles the game presents are tricky indeed. Certain dungeons straddle the fine line between clever and annoying, because you have to deal with random encounters while you're working to figure out puzzle solutions.

It's in these dungeons that you encounter demons to both fight and recruit into your party. One of the key elements of Soul Hackers is engaging in conversations with your enemies. Depending on your responses, you might be able to resolve battles without fighting, earn items, or even convince demons to join you outright--or you might anger the demons to the point where they attack without warning. The art of persuasion is important, not only for bolstering your roster, but also for earning money, since defeated foes don't usually drop funds. You'll be terrible at conversation initially, but once you discover patterns in demon behavior and develop stats and customizations that aid in understanding, you'll be smooth-talking more often than not. You can't talk your way out of all fights, though; you need to battle and level up to be able to handle stronger foes and tame higher-echelon demons.

Demons need upkeep, too: they can exist in the world only by using a limited resource called magnetite, which constantly depletes when they're summoned. A bigger party leads to much faster magnetite depletion, so you must weigh the pros and cons of having a large entourage when exploring. Demons also have differing personality types and loyalty, which can result in their disobeying orders in battle if they don't like your commands--unless they've grown fond of you.

Demon fusion, another core element of the Shin Megami Tensei series, comes into play in some interesting ways in Soul Hackers. You can fuse two or three demons together to create a different, more-powerful creature. In addition, sometimes skills from fused demons carry over to the resulting being. Soul Hackers also lets you create and re-create a being called a "zoma," which can absorb all the skills of the demon fused with it, and requires no magnetite to be used in battle. Finally, later in the game, you have the ability to fuse a demon with a sword that the hero or Nemissa can wield, thus granting the weapon special abilities.

There's a lot of customization and party micromanagement involved in Soul Hackers, and exploring the ways all the different systems intertwine is fun. But like many games of its time, it offers precious little in the way of in-game help or tutorials, instead expecting you to either know the basics through previous experience with Shin Megami Tensei games or learn by trial and error.

There is a brief primer on demon conversation near the game's beginning, and some characters that offer services have optional text explanations available, but as far as figuring out things like attack types, what commands do, and the effects of demon loyalty, you're either on your own or flying blind until a later point in the game where mechanics are explained. The basic-looking, text-driven interface doesn't help much in this regard, either, making it somewhat difficult to access certain information at times. As with the visuals, it seems like an opportunity to improve this aspect of the game for the 3DS version was squandered.

It's not completely rough, though, because there are a few helpful elements you can use: difficulty settings and assisting features such as full area maps can be toggled by touching the bottom screen of the 3DS, and computer upgrades you can purchase and install let you add useful gameplay features, including being able to save anywhere. Finally, new to the 3DS version of the game is Nemechi, a sort of virtual pet that uses StreetPass functionality to collect currency and allow you to purchase special and powerful demons. (If your StreetPassing abilities are limited, you can thankfully use Play Coins instead.)

Soul Hackers comes with caveats: it's tough to get into initially and is far from the prettiest role-playing game on the 3DS. But once you make it past those hurdles and the game clicks, there's a lot to love in its demon collection, customization, and retro-cyberpunk setting. If you have the patience to deal with its old-school flaws, Soul Hackers will reward you with an engrossing portable RPG experience. 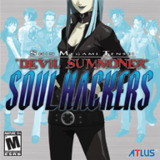