One of last year's most challenging games is somewhat kinder and gentler in Devil May Cry 3: Dante's Awakening - Special Edition. Purists might scoff at the milder difficulty level of the still-tough hack-and-slash action, though they'll probably like the decent new bonus features added to this budget-priced rerelease--especially the ability to play through the game's levels as Dante's ruthless twin brother, Vergil. At the same time, those with a lower threshold for pain than DMC3's established fan base should appreciate this update, since the punishing difficulty was really the only reason 2005's DMC3 couldn't be wholeheartedly recommended. Ironically, though, while making the game easier might make it accessible to more players, the gameplay isn't quite as deeply satisfying. Of course, in terms of content, this is largely the same exact game as before, so it's still close to being as impressive and exciting as ever--one year after it originally debuted.

What made DMC3 such a great game in the first place was its flashy presentation and its fantastic combat. As the brash demon hunter Dante, you can literally kick all kinds of otherworldly ass top to bottom, courtesy of your various over-the-top firearms and melee weapons. Split-second timing is necessary to avoid your enemies' ferocious counterattacks, and learning to dodge properly and to not get blindsided by an occasionally awkward camera angle definitely takes time. But eventually, everything feels just right, and suddenly you're making mincemeat out of tons of foes--pulling off spectacular combos involving multiple weapons, thrashing foes up into the air, high in the sky, and down to the ground, and then finishing them off while they're lying helpless at your feet. It gets all the more intense when you're battling the game's numerous boss opponents, which are arguably the highlight of the experience. Occasional puzzle-solving and backtracking offer a brief respite from the carnage, but otherwise they aren't particularly exciting aspects of play.

Those familiar with the original version of DMC3 will want to know exactly what's different about the Special Edition. Being able to play through the missions as Vergil is probably the most noteworthy addition, but the optional new continue system is the change that has the most dramatic impact on gameplay. In the original version of the game, you needed to purchase yellow orbs to continue from a nearby checkpoint when you died. These orbs were prohibitively expensive in the beginning, and the system itself was fairly confusing anyway, so there was a very steep learning curve that revolved around forcing you to replay entire levels only to get beaten over and over again by tough boss monsters waiting for you at the end. The new continue system is far more lenient, since it lets you continue from a nearby checkpoint as often as you wish, and if you have a gold orb in your inventory, you can bring yourself back to life right where you died. Having two (or more) lives with which to beat the game's bosses makes all the difference in the world, and it goes a long way toward making the legendary difficulty level of DMC3 a lot less remarkable, for better or for worse. You've still got the old continue system to use if you want it, but most players will naturally take the path of least resistance.

On top of that, the default "normal" difficulty level in DMC3: Special Edition is a lot easier than in the original US version of the game. For whatever reason, the "normal" difficulty in the original US version was equivalent to the unlockable "hard" difficulty of the Japanese version. But now, the "normal" difficulty is equivalent to last year's easy setting. Combine the new gold orb continue system and the now-reasonable default difficulty level, and you've got a game that's still pretty tough in spots, but nowhere near as off-the-deep-end as the original US version. If you still end up having trouble, you'll unlock an easy difficulty mode after dying a few times, and this setting is true to its name--it's a whole lot easier than the dubiously named "easy" mode in the original release, especially when combined with the new continue option. Multiple tougher difficulty modes are also made available as you successively finish the game, including a supposedly new "very hard" mode that's really just a new label for last year's game's hard mode. So fans expecting an even stiffer challenge probably won't find what they're looking for here. After all, not only are there no new difficulty settings, but the new continue option fundamentally makes the game a lot easier no matter the setting you choose. And the game is easier still if you play through it as Dante's counterpart.

If you've played through DMC3 already, you know that Dante's brother Vergil has deadly fencing skills and lightning-fast moves, and you'll find that all of his attacks are at your disposal when you play as him. His quick-draw attacks with his Japanese battle sword can devastate multiple enemies at once, and instead of guns, he can summon limitless mystical swords that fly out and pierce his foes. Later, he can upgrade these weapons to form defensive barriers and more. In fact, he's considerably stronger than Dante, at least at first. He's got access to three useful melee weapons right from the start, and he also starts out with the devil trigger ability, which grants him temporary invincibility and health regeneration--truly a lifesaving skill that Dante doesn't learn until a good way into the story. But is stronger really better in this case?

When you begin a new game, you can choose to play as Vergil either if you've previously finished the game as Dante or if the game detects save data from the original version of DMC3 on your memory card. This is a little odd, since it hypothetically means DMC3 players who've never finished the game could start playing as Vergil and breeze through an adventure that they'll remember being much tougher before. Also, Vergil just isn't as fleshed out as Dante from a gameplay standpoint. He starts with all his weapons and has only the one "dark slayer" fighting style, which is like Dante's trickster style only cooler sounding. You can still unlock some new fighting abilities as you go, but you don't feel as though you're growing stronger and stronger like you do with Dante.

What's more, you'll surely notice there's no story continuity when playing from Vergil's perspective. Cinematic cutscenes are simply stripped out, so there's no context for any of the fighting, which can be pretty jarring since Vergil does get his own introductory cutscene--as if what's about to transpire is a whole separate story taking place from his perspective. But it turns out to be the same content as what Dante has to go through, right down to the showdowns against Vergil himself. In one particularly confusing moment, you see a blue-clad Vergil standing atop a tower in anticipation of a battle against...himself? It would have been great if the tables were turned for this sequence and you battled against a computer-controlled Dante, but as it turns out, you just end up fighting your clone...who's dressed in red, not blue. For what it's worth, the game does have a new boss battle, in which Dante or Vergil must take on the enigmatic and patently annoying Jester. It's a decent fight, but Jester's practically a pushover who's nowhere near as difficult as some of the notoriously tough bosses elsewhere in the game. In any case, think of Vergil's mode as a bonus feature rather than a separate adventure. It would have been great to get a whole separate adventure from Vergil's perspective, but DMC3: Special Edition doesn't go nearly that far.

There are a few other added extras. The Bloody Palace is a pretty good bonus that's functionally equivalent to a survival mode. As with Vergil's mode, the Bloody Palace is accessible as a starting option if you've either finished DMC3: Special Edition once or if you've got save data from the original version. This mode strips away all semblance of plot--instead focusing purely on DMC3's exciting combat system--as it throws you into one battle after another. The Bloody Palace actually consists of 9,999 levels, but after each fight, you can choose to advance by one, 10, or 100 levels by entering one of three elemental portals. Occasional health power-ups can keep you alive over the long haul, but occasional run-ins with DMC3's bosses might just end your Bloody Palace run prematurely. You can't save your progress in this mode, and it pits you against lots of familiar foes, so it's mostly best suited for hardcore DMC3 fans looking to hone their skills and squeeze as much out of the game as they can. For good measure, you also have the option to enable a new "turbo mode," which speeds up the gameplay by 20 percent--enough to make the action maybe a little more manic than usual. You can also watch the game's fantastically choreographed cinematic cutscenes in a theater mode, as well as unlock gallery images and multiple costumes for both characters.

DMC3's smooth 3D graphics still look great, and the heavy metal soundtrack matches the combat as well as ever. Yet even though the new Special Edition superficially seems to be nearly the same exact game as the original--down to the identical box cover and instruction manual--the experience itself has changed quite a bit due to the difficulty readjustment. Sure, you can still experience a very tough game by unlocking the harder settings and opting for the original continue system, but the way in which the original version threw you headlong into such tough battles straightaway was part of what contributed to a fantastic experience, if you had the wherewithal for it. So between the more-conventional challenge and the passage of time, this Special Edition isn't quite as impressive as the original. But it's still a great action game on its own terms, and it packs a lot of added content for those 20 bucks--enough for DMC3 fans to justify getting it again.

View Comments (3)
Back To Top
8.2
Great
About GameSpot Reviews 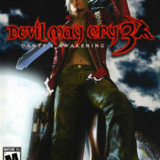