Destruction Derby stands alone as the premier demolition racing series on the PlayStation.

The first improvement you'll notice with Destruction Derby Raw appears on the title screen: There are many more gameplay options. There's a season-style wreckin' racing mode, where you earn points for completing tracks and thrashing your opponents. You can't upgrade your car in this mode, but you do get to choose the order in which you complete the 25 courses. The next menu option, smash4$ (that's "smash for cash," in case you aren't into reading license plates), takes the wreckin' racing formula and twists it, in that you lose the choice of which course to race, but you earn money with which to upgrade your vehicle. These single-player modes also give you the ability to unlock eight bonus cars, such as a delivery truck or a police car. As for initial vehicles, the game gives you access to eight, but this stock set climbs to 17 once you complete a few tracks or purchase them. Should you tire of the single-player experience, Destruction Derby Raw also contains four multiplayer battle games, all of which support up to four human players and 16 CPU onscreen opponents. There's the stadium-based destruction derby, the team-based capture the flag game called assault, the skyscraper battle mode, and the remake of schoolyard tag titled pass da bomb. Adding to the Destruction Derby Raw's overwhelming variety, each of these multiplayer modes has a number of additional gameplay settings, such as vampire and suicide options, that further increase the game's replay value.

Once you actually take these features out for a test drive, you'll notice that Destruction Derby Raw isn't fundamentally different from its predecessors. You still need to attempt to disrupt opponent vehicles while trying to finish a race, and you still must do so while keeping track of your own damage meter. Although you don't have to finish first to proceed to the next race, doing so won't hurt your point totals. To aid this effort, the turbo meter makes its triumphant return, giving you a much needed boost of speed with a tap of the L2 button.

Just because the game includes features from past releases, don't get the impression that Destruction Derby Raw is a total rehash. It's not. The game actually has a number of excellent new gameplay features. Developer Studio 33 has tweaked the collision system to better allow for side-impact collisions and chain reactions, and while the game still doesn't account for rooftop landings or driver's-side impacts, the amount of damage your car incurs from head-on crashes has at least been diminished. As such, you still need to work hard to earn those collision points, but now you at least have the time to do so. The new collision system, coupled with a plethora of new crashes and flips, makes the task of destroying opponents both enjoyable and exciting, as you're no longer plowing through groups of cars without reward. In Destruction Derby Raw, you'll get enough chain-reaction points to make your head spin. Rounding out the new additions, a much needed hand brake makes its debut, giving the game the precise control it has been lacking for so many years. Now, when that pesky Colorado is on your tail, you can just do a doughnut and take him out.

While Destruction Derby Raw's gameplay is a clear-cut mixture of old and new, its visual prowess manifests itself as a subtle set of improvements. Tracks are a pleasant combination of wide and narrow twists and turns, with plenty of optional shortcuts, jumps, and pitfalls. Background detail is the highest it has ever been in a Destruction Derby game, with the number of skyscrapers, pipes, and roadside foliage providing an added degree of realism and tension. As far as frame rate goes, the game seems to move faster than Destruction Derby 2, although at a cost of increased texture graininess. There's hardly any texture warping or slowdown, though, which makes the game much easier to see than its predecessors. While the game places the majority of its visual emphasis on environmental detail and frame rate, an adequate array of simple particle effects, explosions, and car decals also contribute to Destruction Derby Raw's visual experience.

Even more subtly than its graphical enhancements, Destruction Derby Raw's audio isn't much different from or better than that of Destruction Derby 2. The music, a decent blend of techno, house, and rock, puts most other racing games to shame. The game's effects, on the other hand, run the gamut from the pleasing sound of bent metal to the laughable rendition of a dangling muffler on pavement. At times, the game sounds like aluminum cans placed under a microphone, but the strong array of explosion effects and bass thumping beats lessens the silliness somewhat. Destruction Derby Raw's audio offerings pretty much sum up the game itself: a subtle series of fixes and adjustments to an already solid game. Better control over collisions would have been nice, but the greater track selection and sheer number of additional multiplayer options more than makes up for such an omission. 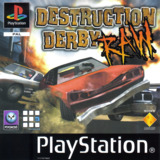