This is a blatant and insulting instance of a game released too early to the detriment of the people who buy it.

Sometimes software is released in such a wretched state that the developers may as well just come to your house and kick your dog for $40. This is the case with Destroyer Command, a painful instance of just how shameless and insulting a computer game company can be with its customers.

Destroyer Command is the spiritual heir to all those Great Naval Battle games SSI used to publish. You command a ship (or ships, in some cases) from either an overhead map view or by jumping around the various stations, where you flip switches, twiddle dials, and look at gauges. But whereas the Great Naval Battles series put you on the bridges of the century's grandest battleships, Destroyer Command relegates you to their little cousins, the destroyer escorts in World War II who kept enemy subs at bay. While this might seem like a less glamorous command, it does open the game to antisubmarine warfare, a topic that hasn't been covered in a sim since Novalogic's 1990 game Wolfpack. It also means you'll get to use torpedo launchers, which were the real teeth of destroyers in that era. Since you usually have to get in close to fire torpedoes, using them requires more finesse than simply plugging away with your 5-inch guns.

The developers at Ultimation created this sim as a companion to last year's Silent Hunter II, a submarine sim that was supposed to be "interoperational" with Destroyer Command. What this means is that you can link them together and play multiplayer games in which some players drive subs and some players drive destroyers. At least that's how the theory goes. As of two weeks after the game's release, there's no support for "interoperation" and no official word on when a patch will be available. Considering how long the deeply flawed Silent Hunter II has remained unpatched (five months and counting), this doesn't bode well. Note that this didn't stop Ubi Soft from advertising this feature on its Web site, on the game box, and in the manual. "One of the most exciting features of Destroyer Command is the ability to play cooperatively or head-to-head against other Destroy Command or Silent Hunter II owners," the manual states optimistically. There isn't even a correction for this in the readme file.

There is multiplayer support for destroyer-only games. Since real engagements can last hours, the time compression works by selecting the slowest speed chosen by all the players, which lets the boring stretches speed past at whatever pace players choose. You can play deathmatches, cooperative missions against computer-controlled vessels, and even base-capture games. While these work well enough over a LAN, Destroyer Command repeatedly drops out of sync and crashes when played over Ubi Soft's online matching service, ubi.com.

The single-player game consists mainly of two campaigns, each a linear set of about 20 canned missions. Because Hitler's surface navy was quickly defeated, the Atlantic campaign should have been mainly sub hunting, but Destroyer Command goes out of its way to put you in the middle of surface battles against German raiders and even Italian ships in the Mediterranean. The far more interesting campaign is set in the Pacific, where you get to participate in historical highlights like "running the slot" to Guadalcanal, covering MacArthur's triumphant return to the Philippines, and even a late-war drive on Japan itself. At one point, you help kick the Japanese off an island at the tip of Alaska, a completely inconsequential exchange of land notable as the only time foreign troops have seized American territory. There are a couple of attempts at carrier battles, arguably the deciding factors in the war against Japan, but Destroyer Command presents these epic struggles with all the accuracy and grandeur of a third-grade Thanksgiving pageant. You can set up epic naval encounters by using the custom mission generator, which lets you throw in everything but the kitchen sink. Unfortunately, there's no random generator, so you always know exactly what you're facing before you ever see it on the map.

Because the challenge of submarine warfare is the uncertainty of being hidden underwater, Ultimation's submarine sim Silent Hunter II suffered greatly from its canned missions. During the inevitable replays, knowing exactly what you would be facing and where it would be located killed the thrill of the hunt. But this isn't so much a problem with surface warfare, where the challenge is maneuvering into position once you've made contact. In a way, Destroyer Command plays like a wargame, and the scenarios are like set-piece battles in which you have to figure out the best tactics. There are still plenty of aggravating situations when you have to repeatedly replay a mission to accomplish some objective, but it doesn't drag the game down as much as it did in Silent Hunter II.

What does drag the game down, and what's been preserved intact since Silent Hunter II, is the horrible AI. Ships plow into other ships in their convoy. Ships plow into their targets. Ships plow into sinking hulks. Ships plow into submarines, which don't have the presence of mind to dive below periscope depth when a destroyer is bearing down on them. Ships plow into islands and entire continents. When they're not plowing into obstacles, ships behave as if their captains skipped class the day maneuvers were being taught at the Naval Academy. They won't dodge torpedoes, and they won't split into separate groups to draw fire. In a game where the challenge is one of maneuvering, it's as if your opponent isn't even bothering to play. They won't stay in formation properly, and they're more than happy to let loose a spread of torpedoes into the hull of a friendly ship 200 yards away. It's one of the most egregious instances of friendly fire you'll ever see in a game when a single destroyer sinks all three ships in its squadron with one volley of torpedoes. Destroyer Command is like Disney's Boatniks, but with guns and torpedoes.

Aside from the fact that the AI seems incapable of simulating anything like real naval actions, there are some historical peccadilloes. The "waves" of planes coming in four at a time are more like Galaga than actual antishipping attacks. A valuable function performed by destroyers was laying smoke screens to protect the bigger ships, but there's no provision for this here. Any self-respecting naval sim should have a damage model that takes into account hitting ammo magazines, the rare and catastrophic equivalent of a critical hit that decided several encounters by instantly destroying crucial ships. Submarines were rarely as aggressive against destroyers as they are in Destroyer Command, where they'll squander valuable torpedoes taking hopeless shots at an approaching destroyer instead of diving. In reality, those torpedoes were usually reserved for important targets like merchants and capital ships.

The graphics engine doesn't hold up very well at all. The ship models are serviceable, but everything else is perfunctory at best. Damage effects are canned fire animations, blooming predictably from ship models like orange flowers. When ships sink, they invariably list to one side and then drop straight down as if they were melting into the ocean. The weather effects are almost nonexistent, there's a conspicuous absence of men on the decks of ships, and the water doesn't do anything but undulate and sparkle. Carriers don't even have planes on their decks. The smoke effects look good, particularly in the aftermath of a battle, but they kill frame rates on even the fastest computers. There's no gamma adjustment, and even daytime missions in clear weather can be dark and muddled.

With computers as powerful as they are, and with CPU cycles to spare because the AI is obviously not using them, Destroyer Command should have looked much better than it does. By way of example, there are some later missions that have you attacking gun emplacements on the shore to cover ground troops. Although there's potential here to create a memorable visual experience, all you get are vaguely boxy shapes set on featureless island terrain. Nighttime missions with star shells illuminating their targets are a great opportunity for eerie dynamic lighting, but there's nothing of the sort in Destroyer Command.

Finally, there are the inconsistent interface and the broken features. The manual seems to have been based on a different build of the game than what actually shipped. There are scattered hotkeys for some features, but you can't reconfigure them. You can't invert the mouse for the gunnery stations, and there's no way to adjust its sluggish sensitivity. There's a row of pop-up buttons to jump to different stations, but they're hidden by default, and they don't pop up until after a short delay; it's as if screen real estate was suddenly so valuable that those 30 pixels along the bottom of the screen couldn't be spared. One problem the developers haven't even attempted to solve is that there's no reason to visit most of the stations. You can do almost everything from the efficient and informative overhead map. Ultimation went to all the trouble of creating stations that let you take direct control of the finer points of the game--torpedo settings, gunnery, depth-charge runs, engine management, sonar, and radar--but because there's absolutely no incentive to do so, the developers effectively rendered their hard work superfluous.

It doesn't help that some of these stations are useless at best and broken at worst. For instance, the hydrophone at the sonar station doesn't work, so you can't take control of it to listen for subs and enemy ships. There's no way to set your heading from the helm short of manually moving the rudder. The depth-charge screen is useless as anything other than a place you have to visit to press the space bar if you want to drop depth charges manually. There's never any time in the game you'd need to visit the engine room, which allows for absolutely useless things like linking individual boilers to turbines.

Most of these problems are as obvious as a pig on a sofa, so how could they have slipped through the QA process? Ubi Soft apparently didn't skip the QA because there are 25 testers listed in the credits, including a reputable naval simulation Web site (www.navalwarfare.org). It's inconceivable that none of these testers noticed problems with the AI, the interface, and the broken features. Part of why Destroyer Command is so painful is that it comes from companies that should know better. The publisher, Ubi Soft, gave us one of the latest greatest sims to date in IL-2 Sturmovik. Producer Carl Norman has overseen classic sims like the aforementioned Great Naval Battles series, IL-2, Su-27 Flanker, and the Harpoon naval strategy games. The developers at Ultimation have been making sims for five years, some of which aren't bad. The state of Destroyer Command cannot be attributed to oversight or inexperience. This is a blatant and insulting instance of a game released too early to the detriment of the people who buy it. If you're thinking of being one of those people, at least wait to see if Ultimation and Ubi Soft get around to finishing it. Otherwise, you might as well just find your dog, kick her, and throw $40 in the trash. 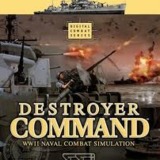 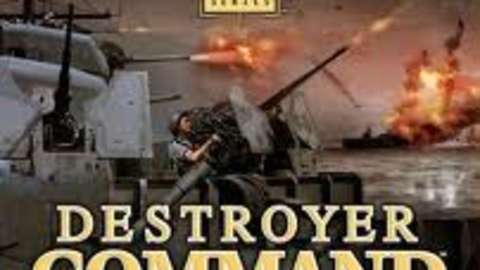 This is a blatant and insulting instance of a game released too early to the detriment of the people who buy it.