Back in the days of the Nintendo 64, AKI was renowned for its offerings in the wrestling game market. Starting out with Virtual Pro Wrestling, an import title that featured a host of Japanese wrestlers and a simple but highly enjoyable game engine, AKI eventually became the preferred developer among many wrestling fans, creating such popular American titles as WCW vs. NWO Revenge and WWF No Mercy. Now, thanks to Electronic Arts, AKI has found its way to the modern consoles with Def Jam Vendetta, a hip-hop-themed wrestling game that may not contain your favorite wrestlers, but does manage to contain some of the best wrestling gameplay around.

Def Jam Vendetta takes place in a fictional underground street-fighting circuit owned and maintained by a mysterious and most certainly evil character known only as D-Mobb. The game features more than 40 wrestlers, including a handful of artists from the Def Jam Records label, such as DMX, Scarface, Method Man, Redman, WC, Ghostface Killah, and others. Fights take place in various back alleys and seedy clubs in and around New York City. However, despite the game's liberal usage of the term street fighting, Def Jam Vendetta is most definitely a wrestling game, and a very good one at that.

Fans of the AKI wrestling games will know exactly what to expect from Def Jam Vendetta's gameplay. Save for a much quicker pace and some minor tweaks here and there, the AKI engine has been left largely untouched. Standing maneuvers are performed by pressing the strike button or grapple button in conjunction with a direction on the analog stick. Quickly tapping either button will perform a weaker version of the move, while holding a button down will perform a much stronger strike or allow for a more powerful grappling maneuver. Moves that involve launching off the top rope or throwing opponents into the ropes are set up similarly. Building up your wrestler's momentum meter allows you to execute a special attack. When the meter reaches its peak, holding down the grapple button and hitting the right analog stick will perform your wrestler's unique special move. All damage done in the game is region-specific, and each part of a wrestler's body has its own health meter. Each wrestler also has a general health meter that will slowly replenish throughout the match. This meter largely determines whether an opponent can be knocked out or pinned, while the region-specific meters are largely geared toward submission moves. Players looking for a more inventive or original method of play may find themselves turned off by how steadfastly the game holds to the AKI formula, but while it may not be very innovative at this point, it's still a very solid system.

Def Jam Vendetta has all the usual match types and modes you'd expect from a wrestling game. Battle mode serves as the game's exhibition mode, allowing up to four players to choose from a variety of different match types, including single, tag-team, handicap, and battle royal. In survival mode, you choose one wrestler and take on more than 40 opponents in a long, drawn-out series of single matches. While these modes provide a very standard wrestling experience, the true heart and soul of the Def Jam Vendetta is its story mode. You begin by choosing one of four original characters, each with his own strengths and weaknesses in the categories of power, grappling, speed, stamina, defense, and charisma. Starting out at the bottom rung of the circuit, you go up against a series of generic wrestlers. Eventually you will come upon a boss character for that level, played by one of the Def Jam artists. Beating any character in this mode unlocks him in the other gameplay modes.

Wins also earn cash for your character, allowing you to improve your wrestler and purchase unlockable items. Tag-team matches will also present themselves occasionally, as will intermittent fights between female characters, usually over the bragging rights to call themselves your manager. You actually get to choose which female character to play as, in effect choosing which one you want to serve as your valet. If so inclined, you can also unlock pictures in the game's photo gallery of the real-life counterparts of the female characters. Overall, the story mode is actually a lot of fun, providing just enough plot to keep things interesting. Unfortunately, it is a bit on the short side, and an experienced player will likely finish the entire thing in just a few hours. However, to unlock all the game's hidden items and wrestlers, you will have to play through it multiple times.

Graphically, Def Jam Vendetta is great all around. Each and every one of the character models looks really good, and the generic characters manage to distinguish themselves quite well. Nearly all the game's animations have been lifted directly from the previous AKI wrestling games, but many of them have been improved upon to keep up with the faster pacing of the gameplay. The game's special moves are all extremely over the top and completely implausible, making for a very entertaining finish when executed. As for the different arenas you compete in, none of them are especially impressive in any way, but each has enough going for it to create the proper ambience for an underground street fight. In addition, the game features a decent number of prerendered video sequences during the story mode that are very well done. Def Jam Vendetta is available on both the PlayStation 2 and the GameCube, and while the two versions are almost identical, the GameCube version does have a slightly cleaner look to it.

Def Jam Vendetta also provides a truly superb audio experience, thanks largely to the Def Jam license itself. The game boasts an excellent soundtrack, consisting mainly of tracks from the artists featured in the game, but also a couple of tracks from older Def Jam mainstays, such as Public Enemy and Onyx. During gameplay, you just get a looping instrumental version of the songs, but in the various menu screens and throughout sections of the story mode, you are treated to the full lyrical versions, although they are radio edits. Surprisingly enough, Vendetta's voice work is also top-quality. While each character usually has only a few specific verbal taunts for the beginning and ending of matches, the lines themselves are delivered quite well, considering how easy it would have been for many of the artists to just sleepwalk through their lines. Even the generic characters have quality voice acting behind them. The game's commentary is provided by famed DJ Funkmaster Flex (who also can be unlocked as a wrestler). His commentary works well, thanks in large part to his loud and flamboyant demeanor and the fact that he throws in just enough insight and insults to keep things fresh.

As a wrestling game, Def Jam Vendetta manages to succeed on most every level, providing surprisingly deep gameplay, quality graphics and sound, and a distinctive atmosphere. And while the game could have used a few more real-life artists and a bit more depth, Def Jam Vendetta is still strong enough in its execution to make it a perfect alternative for fans who have grown weary of the standard WWE-style games. Vendetta is truly a great wrestling game that any fan of the genre should try. 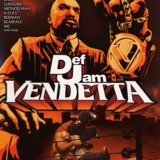