While a lack of maps cuts into the game's value somewhat, Day of Defeat: Source still offers a satisfying and exciting experience for those who just can't get enough of World War II.

While Counter-Strike was easily the most popular mod developed out of the Half-Life engine, another mod based on World War II, Day of Defeat, also turned out to be quite a hit. Like Counter-Strike before it, the mod eventually made it onto store shelves as its own retail product. So it only makes sense that Valve would port this popular game over to its flashy new Source engine as it did with Counter-Strike. While a lack of maps cuts into the game's value somewhat, Day of Defeat: Source still offers a satisfying and exciting experience for those who just can't get enough of World War II.

Like its predecessor, Day of Defeat: Source focuses strictly on close-quarters infantry combat. You'll play as either the Americans or the Germans on four different maps. Yes, currently Day of Defeat: Source only offers four official maps to play on, but Valve has promised that more are on the way. If Counter-Strike: Source is any indication, Valve will follow through at some point. At least the routes that you can run on the maps are well-designed and flexible for the most part. There are usually multiple ways to approach any given objective, and once you get there, you're usually open to attack from different angles and elevations. In each of the initial maps, the goal is the same. Five capture points are scattered across the level. Your team can gain points by killing members of the other team, or capturing and holding one of the objective flags. If one team ever gains control of all five points at once, big points are awarded to that team, and the round is reset with each team returning to its spawn site. Most of the flags on any given map can be captured just by touching them, but some points require a couple of players to sit on the flag for a brief period of time. The ability to quickly capture a flag in Day of Defeat: Source contributes to the surprisingly quick pace. Also adding to the general speed of the game is that your default run speed is fairly fast already. A sprint button is available, which is limited by a fatigue bar, but using it lets you move at what seems like lightning speed.

You'll appreciate the ability to move quickly though, because the sprawling levels are chock-full of buildings, as well as alleyways and dark passageways, which can be entered. Anywhere you turn, an enemy might be lying in wait, aiming at you from an elevated window or a dark doorway. You never know which window or corner may be harboring a threat. All of this contributes to a constant sense of tension as you explore streets and enter the buildings that are decorated with a realistic amount of furniture and clutter. Our favorite of the four maps is Anzio, as it offers three levels of fighting, from underground passages, up to narrow, winding streets, and on up to elevated windows and firing points. Aside from its well-designed maps, Day of Defeat: Source also offers some interesting control quirks to help differentiate it from the endless number of WWII shooters on the market. You can, for example, attempt to pick up grenades and throw them back at enemies. In addition, you can't fire while sprinting or jumping.

There are six different class kits. These range from standard riflemen to submachine gunners to heavy machine gunners, snipers, and even bazooka-carrying infantry. The classes across the two sides are fairly analogous, like chess pieces. Even the American rifleman with his semiautomatic M1 Garand doesn't gain that much of a speed advantage over the German rifleman with a bolt-action Mauser. Each primary weapon includes a secondary fire mode that varies depending on the gun. Riflemen can aim down their iron sights, while submachine gunners get a melee attack. Heavy machine gunners and rocket-armed infantry must set up their weapons before they can be fired. Shooting a machine gun from the hip is literally uncontrollable, so you must set up a bipod on a railing or windowsill or else go prone to set up. The bazooka and Panzerschreck soldiers must also set up their rocket launchers before they can fire. Meanwhile, the support troopers can select single shot or automatic on their guns. All the guns in Day of Defeat: Source have quite a bit of recoil and kick compared to similar shooters, which encourages you even more to kneel or go prone in order to keep control.

While all these class options give the classes some obvious variety, there seems to be some odd balancing issues. For example, it would have made more sense to give the riflemen a melee attack as the secondary fire instead of aiming down the iron sight. This would give riflemen a fighting chance in close quarters. While aiming does seem to give a little bit of increased accuracy to the weapon, the extremely slow transition and major speed penalty involved make it often unappealing to use the aim, when firing from the hip can be almost as effective and can still give you a chance to dodge a bit. At least the rifle grenades you get as a riflemen are fun to use and quite effective. Similarly, it doesn't make a whole lot of sense for the submachine gunners to get a secondary melee attack--isn't their gun already meant for close quarters? The developers have also generously awarded the rocket launcher-armed troops with a carbine as a secondary arm, a far sight better than the pistols offered to such troops in other games. Also, in the hands of a skilled player, the carbine is almost as effective as other primary guns. In the grand scheme of things, though, these are probably relatively minor quibbles against an overall fun and fast-paced game.

Part of what sets Day of Defeat apart from other shooters is the interdependence of the various classes. Snipers and riflemen can reach out and hit enemies down long corridors or streets, while submachine gunners and the support troopers carrying BARs and Sturmgewehr assault rifles are better for indoor combat and close-quarters action. As your team makes its way around the maps and tries to capture and defend the various points, you'll rely on machine gunners to set up and cover long approaches to your flag. Bazooka infantry and grenades can help flush out entrenched snipers, while the submachine gunners should lead the way into buildings for other classes who need to move. While the fast-paced nature of the game seems to generally favor those carrying automatic weapons, the teams that are successful are the ones that move together and work with a purpose. Freelancing in Day of Defeat: Source doesn't get you as far as it does in something like Counter-Strike because of the greater inaccuracy of the weapons and the extreme ease with which you can die.

Presentation is Day of Defeat: Source's most obvious strength. Clouds from smoke grenades and the resulting dust from explosions and machine gun fire look great with the graphic engine's ability to render fantastic volumetric effects. The character models are also well detailed and animate smoothly. All of the levels in the game also offer incredible texture detail and a believable volume of debris and objects that you'd expect from a war-torn town. There's even a good deal of amusement to be had from the rag-doll physics that are present. The effect of bodies getting blown back from explosions might be a little overdone, but seeing a limp body left hanging at a macabre angle from a windowsill or obstacle makes Day of Defeat just that much more visceral. If there's any nitpick we have it would be with the weapon models, which aren't quite as sharp as you'd hope. And you'll also need a pretty good machine to run the game well. Our Pentium 4 2.4GHZ, with 1GB of RAM and a 128MB Radeon 9700 Pro ran at playable frame rates, but encountered some occasional hiccups, even running at 1024x768. We really loved the sharp and impactful sound effects. Each of the guns offers a unique and recognizable timbre. Canned voice commands are also available, but what's more interesting is that you can hear from which direction the enemies are yelling out when they're on the battlefield giving orders or whenever they've captured an objective marker.

While Day of Defeat: Source leaves a lot to be desired for now as far as content goes, what's available is very high quality. The four available maps are well designed, creating a tangible and enjoyable flow as the battle shifts from one objective to another. The game also offers all the beauty and polish you'd expect from a shooter powered by the Source engine. If you've already paid for Day of Defeat: Source from a prior Half-Life 2 premium purchase, you've got nothing to lose by downloading and joining the ongoing online fray. For the rest of us, the price of admission is $20, and while one game type and four maps doesn't sound like a lot, it's pretty safe to say that any competitive first-person-shooter fan will get at least that much value out of playing Day of Defeat: Source. It's also a safe bet that Valve will expand on the content in the near future. 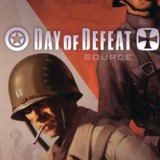