There aren't many opportunities on modern consoles to gallivant about the galaxy shooting space pirates and trading android parts, so DarkStar One: Broken Alliance fills a very large void. And in spite of its many quirks, this long and accessible space combat sim does a fine job of doing so, putting you behind an upgradable spacecraft and giving you an enormous universe to conquer. A lack of depth and lots of mission repetition make the later hours start to drag, and some cringe-worthy voice acting and overly compressed cutscenes lend the story some unintended campiness. But there's no reason the flaws should weigh too heavily on adventurers itching to save the cosmos by blasting nasty alien ships into smithereens.

Just like the PC version released in 2006, DarkStar One: Broken Alliance puts you in the shoes and ship of Kayron Jarvis, son of a talented pilot who was killed after an act of ship sabotage. Like it so often does, revenge forms the basis of this tale, though Kayron soon finds himself wrapped up in a political drama in which--wait for it--the fate of the galaxy hangs in the balance. The twists and turns of the plot do their part to inspire interest, but low-resolution cutscenes and eccentric, oft-repeated voice-overs make it hard to take DarkStar One's story seriously. The actors portraying the leads aren't so bad, and a few side players come across well, like the boisterous, swashbuckling Captain Hornblower. Others, such as the emotionless actress performing monotone communication duties at space stations throughout the universe, sound like they barely understand what their lines mean. It's easy to admire its spunk, but you won't stay glued to the screen on the merits of this humdrum space opera.

Luckily, a light role-playing system that lets you upgrade your ship--the titular DarkStar One--will keep you pushing forward when the story has lost its appeal. You fly about the galaxy seeking artifacts, most of which can be found glimmering on asteroids, though some are earned as a reward for liberating systems taken over by nasty space pirates. With enough artifacts, you level up your ship, granting it more hit points, perhaps, or giving you access to the next weapon class. This is also how you enhance your catch-all plasma device, which can be used for an extra layer of shielding or to emit an electromagnetic blast, among other possibilities.

And so you push through the galaxy in a first-person perspective, collecting artifacts and shooting up anything that turns your reticle red when you target it. DarkStar One is easy to pick up and play from the get-go because of the intuitive controls that make it simple to select targets of note, switch missile types, grab cargo, and more. You shoot your mounted weapons with a single trigger, while turrets fire automatically, assuming you have enough energy to power them. As you move from cluster to cluster, you gain access to more weapon types, from ion pulse weapons that damage shields to graviton guns that fire slowly but do a good amount of damage. It's some hours before you feel like your foes are putting up a struggle, but some later encounters force you to keep an eye on your weapon energy and maneuver carefully around giant cruisers that would turn you into space dust. Most skirmishes play out more or less the same: you target the nearest enemy and pummel it with lasers and spores until it blows up, and then you move on to the next one until the fleet is gone. Combat is simple and predictable, but it's terrific fun to zoom about, zapping Thul drones and Arrack bodyguards, and later enemies mix up their behavior, which adds a touch of challenge and variety.

Nevertheless, this predictability eventually leads to monotony, due to copy-and-paste side missions that see you doing the same activities over and again. Heading to a waypoint to eavesdrop on an unsuspecting group of conspirators is a nice change of pace, until you realize the plotters you overhear always deliver the same lines and always need to be blown away at the end. Providing support for a cargo vessel is a fun diversion, but every such operation plays out exactly the same as the last one. These side missions are optional, but only to a point: you need funds to make sure the DarkStar One has the most up-to-date weaponry equipped, and these missions are the easiest way to earn credits. Fortunately, there are other ways of earning a living in the darkness of space, should you find yourself in a rut. If you fancy yourself a space trader, you can buy low at one trade station and sell high at another, and the easy interface lets you do so with a minimum of fuss. If you'd rather subvert the law, you can attack cargo ships and steal their payload.

The story missions do offer a bit more variety, perhaps giving you a few wingmen to assist you versus a giant cruiser or sending you off to repair a few satellites. The first drastic departure from formula sends you through a series of planetary trenches, taking down turrets and other nasties, which is great fun when you're not struggling with the same mission's troublesome visual slowdown. Another welcome mission takes place in the interior of a great vessel, and while it's fun to navigate these tight spaces, the monotonous mazelike level design dampens the mood a bit. Fortunately, most of DarkStar One's vistas are much more attractive, showcasing colorful starscapes and pretty planets with patterns of light that identify the cities on their surfaces. It's best not to stare too closely at asteroids as you skim their surfaces lest you notice the low-res textures, and it's a pity every race's trade stations look exactly the same, both inside and out. Nonetheless, the game looks nice, and while they tend to suffer from some unfortunate frame-rate jitters, battles are colorful and fun to watch.

You could add a few other nitpicks to the list of DarkStar One: Broken Alliance's minor problems. The inability to drop a side mission in progress can be a real pain if you select one that takes you to a location you haven't yet unlocked, for example. Sometimes, selecting a neutral object on your target list will not select it on your screen, while another bug may keep you from collecting all 100 available artifacts. Yet with all its foibles, this space combat sim is a lighthearted and enjoyable adventure that could last you upward of 30 hours, depending on how quickly you decide to blow through the story. If you've been looking to light up the heavens with lasers and missiles, there's no reason you shouldn't forgive DarkStar One's flaws and take to the intergalactic trade lanes. 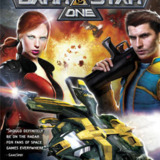 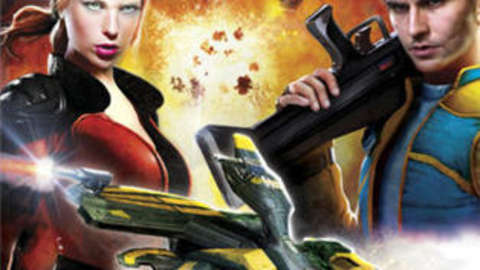 This story-based space adventure features more than 300 systems, six unique races, and an immersive storyline. During the game, you can apply various upgrades to your ship, DarkStar One.