The developer clearly tried to make CSI accessible for a wide audience and in the process also removed all challenge from the game.

Based on the popular television show, CSI: Crime Scene Investigation seems like it has the perfect setting for a game. More specifically, it seems like the perfect setting for an adventure game--as portrayed on the show, the profession is basically just a series of glorified adventure game conventions, like pixel hunts (searching for tiny "hotspots" onscreen with your mouse pointer) and dialogue trees. As such, it's frustrating that the game gets off to a promising start, then quickly turns into a big mess. Ultimately, CSI has a good premise, good tools, and good scenarios for an adventure game, but the developer clearly tried to make CSI accessible for a wide audience and in the process also removed all challenge from the game.

You play as a new recruit at the Las Vegas Crime Lab. The game is made up of five distinct cases, each pairing you with one of the show's investigators. You investigate several murders, a case of arson, and a kidnapping. The first case, the murder of a showgirl, acts as the game's tutorial. You learn how to use the tools of the trade, including cotton swabs, rubber gloves, UV lights, and plaster molds. You search the crime scene for prints, take your findings to the lab for tests, and match evidence against computer databases. In this regard, CSI succeeds in doing what other good adventure games based on real-world jobs do: taking the ins and outs of an actual profession and making them enjoyable.

But one of CSI's problems is that this tutorial never seems to end. There's always someone standing over your shoulder, pointing out how whatever evidence you've found ties in to the big picture. For instance, at one point you must analyze a phone message for ambient noise. You can select only five distinct sections of the recording, and as soon as you select the right one, your partner points out that there is an elephant in the background. Select another one, and he points out the slot machines. And then he tells you about a casino with an elephant. What exactly is your role in the detective work? At most, five clicks. Compare this to the exact same puzzle in Activision's similar, but far superior, Spycraft, which required that you listen to a tape in detailed chunks and extract the potential ambient sounds by tweaking frequencies. It may sound like busy work now, but at least it was something to do.

The only real challenge in CSI is finding all the evidence. To do so, you go to various locations and drag the blue cursor around until it turns green. Then you click, and you look at something. You can try your tools, but if you're on the wrong track your partner will immediately tell you so. "There are no prints here," your partner will say as soon as you take out the brush. Pick the wrong tool for the right job, and your partner will advise you to "try a similar tool."

If you ever actually get stuck, it will probably be because you overlooked the single piece of evidence that unlocks the next location. If you really don't know what to do, you can ask your partner for advice. You get points deducted from your performance for asking for help, but luckily you won't need to ask in most cases. When you click on your partner, a list of pertinent questions comes up. Options like "How do I positively identify the vehicle?" will tell you that you need to positively identify the vehicle, and you can set out without actually asking for help. And too often, your partner's response won't make sense. Ask the aforementioned vehicle question, for instance, and your partner will say, "Ask Dr. Wilkinson if he owns a truck." Unfortunately, there's no option to ask who Dr. Wilkinson is, even though he doesn't show up until much later in the chapter.

CSI has many of these anachronistic moments, and they get more severe as the game goes on. One such comment ends up giving away the game's big plot twist long before it should have been revealed. Then again, the whole game, even if you get terribly stuck, lasts all of about five hours. The cases take about 30 minutes to an hour each, though you are encouraged to go back through them to achieve a perfect score. You can successfully end a case without finding everything, though the things you don't find are typically the pieces of evidence that don't help your case, such as a DNA sample from an innocent suspect.

One of the big selling points of CSI is that the TV show's cast provided the voices. As a result, the primary cast is noteworthy, but having all that talent around only makes the nonactors stand out all the more, because some of the extras are just awful. The character models are equally inconsistent; the best look decent enough, but the worst look like heads carved out of marshmallow precariously situated atop shirts stuffed with newspaper.

CSI seems like a squandered opportunity. In your first case, as you run the ultraviolet light over a bruised neck and dust a remote control for fingerprints, it seems as though you're in for a game of investigation and deduction. But all you're in for is running ultraviolet lights and dusting for fingerprints while all the interesting decisions are made for you. It's simple, but at least it seems promising at the beginning. The problem is that the game remains simple and gradually loses this promise over its notably short life span. 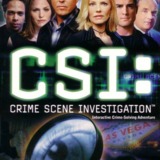 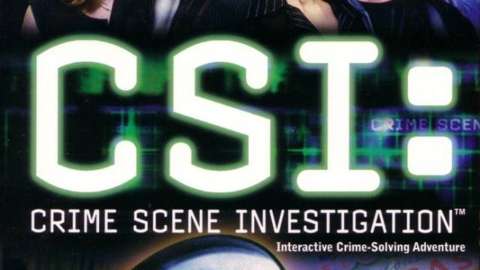