Crush is a one-of-a-kind action puzzle game, and its unique concept makes for a refreshing and bizarre experience.

Genuine originality in video games is rare, and when it comes to puzzle games, doubly so. Even some of the best, most recent examples of the genre, such as D3's inventive Puzzle Quest, have merely been really good amalgams of well-established game concepts. Crush for the PlayStation Portable is an action puzzle game that owes very little of its novel concept to games that preceded it, and it capitalizes on its M.C. Escher-inspired gameplay with a healthy number of increasingly involved puzzles. It's challenging without being too frustrating, and it's easily one of the more unique puzzle games to come around in years.

One thing that makes Crush rare as a puzzle game is that rather than simply serving as a suite of logic puzzles, it offers some real story progression to accompany your advancement through the game. What's more, the story is surprisingly engaging. Danny is a troubled young man who can't sleep. His insomnia becomes so severe that he's sent to an institution, where he's put in the care of the prototypically Freudian psychologist Dr. Reubens. There's a madness to Dr. Reubens' method for curing Danny, which hinges on the mad science of a device he built called C.R.U.S.H., which stands for Cognitive Regression Utilizing Psychiatric Heuristics (which, as Danny points out, means it should actually be called C.R.U.P.H.) This contraption allows Danny to travel into his own damaged psyche, through which he has to go on a sort of vision quest to get to the root of his mental malady. You'll get semianimated sequences at various points in Crush as Danny travels back in time through his own psyche, which, along with the game's warped, through-the-looking-glass aesthetic, go far in setting a surreal tone.

This dovetails nicely into the actual gameplay, which revolves around our perceptions of 2D and 3D space. The levels in Crush generally look like somewhat abstract 3D platforming levels, and your primary objective in every level is to collect a number of Danny's lost marbles, which will then unlock the level exit. Make your way to the exit, and you're on to the next level. As simple as this sounds, you'll quickly find that Danny's basic jumping ability won't be enough to get you very far, even in the very first level, which is where Danny's ability to crush the level comes into play. By tapping L1, you'll effectively flatten all of the level geometry, turning the action from 3D to 2D. Depending on where Danny is standing, as well as which way you have the camera facing, this can create walkable pathways where before there was nothing. Move the camera so that it's looking straight down at Danny, and crushing will allow you to walk across a series of platforms too high to climb as though they were flat land. Crushing from 3D to 2D can also turn what appeared to be marks on a wall into solid platforms, and it can also turn certain types of solid 3D blocks into invisible 2D blocks. There are even types of supersolid blocks that cannot be crushed if Danny is standing in front of them.

There's more to concern yourself with than just crushing, though. You'll often have to actively affect your environment in order to advance, and the levels are regularly littered with giant barrels and metal balls that you can push around, as well as pressure switches you can stand on to change the very geometry of the level. You'll also find "thoughts" throughout the game, which manifest themselves as glowing neon signs on walls and floors. Thoughts can be activated only when the level is crushed, and they remain active only as long as they're visible onscreen. The most common thought is the trophy thought, which makes a trophy appear on the screen that, if collected, unlocks a special time-trial level. You'll find other thoughts that are critical to your progress, such as the lightheaded thought, which increases Danny's jumping ability, or the temporal thought, which stops time. Just like in real life, not all thoughts are helpful, and the dimensional thought prevents you from uncrushing the level.

The basic concept behind Crush is pretty mind-blowing, and the specific behaviors of different types of blocks can be a lot to soak in at once. The game very wisely walks you through a series of tutorials early on, giving you a good amount of time to get acclimated. The levels become more involved and more challenging as you progress, though never to a fault. New concepts are introduced every 10 levels or so, such as infinitely thin blocks that appear invisible from certain angles; giant, antagonistic cockroaches; alarm clocks that will wake Danny up, effectively yanking him out of his dream world; and more. Since Danny is basically just dreaming his way through the game, and since Crush doesn't play by The Matrix rules, death in the game doesn't have significant consequences. The game won't let you uncrush the level if Danny is standing on a platform that doesn't exist in 3D. If you do manage to put Danny in harm's way, be it by jumping off the edge of the level into oblivion, jumping from too high a ledge, getting attacked by a giant cockroach, or getting smooshed by a moving platform, the game will simply take you back to a previous checkpoint in that level, of which there are usually many.

Some might be quick to point out that the recently released Super Paper Mario for the Nintendo Wii also played with the relationship between 2D and 3D perspectives. There's a similarity, to be sure, but the concept is much more integral to the gameplay in Crush, and as such, it's much better developed here. The look and feel of Crush is also markedly different, evocative of a Tim Burton movie, complete with an eerily big-top-inspired Danny Elfman-style soundtrack.

About the only slight that can be made against Crush is that there could've been more levels. There are more than 40 levels in the game, and hidden unlockables like time-trial levels and concept art serve as pretty good reasons to revisit levels. The game's length is fine; it's just that the experience is so mind-bending and unique, you wish that it kept going--a fault more games wish they had. 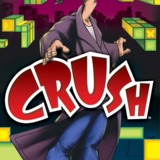