Through a complex system of diplomacy and backstabbing, Crusader Kings II makes every power struggle an engrossing one.

While there are indeed plenty of holy wars to be waged in the medieval world of Crusader Kings II, it's the breadth and depth of peacetime political maneuvering that makes this strategy game such a delight. This is a game with an incredible number of options for scheming and diplomacy, whether it's crafting an arranged marriage to net you a powerful foreign ally or maintaining a balancing-act relationship with the pope when the two of you have very different views on church-taxation laws. The side effect to this complexity is a daunting learning curve, but if you stick with it, your prize is a deeply rewarding medieval strategy game with a focus on the human element of power that makes for a captivating journey through history.

There's no tangible goal to be found in Crusader Kings II. Your job is simply to take the patchwork of feudal states that comprise Europe and the Mediterranean during the Middle Ages and expand your power however you wish. After you choose a starting point somewhere between 1066 and 1337, you play as any head of state from the ruler of the Holy Roman Empire to the king of a tiny territory long since absorbed by a larger nation. Each has its advantages and disadvantages: picking a powerful empire grants you more military and financial resources, but it also saddles you with a collection of barons, dukes, and counts whose ambitions aren't always aligned with your own.

The way you deal with these subordinates is a critical part of your success because what makes Crusader Kings II special is its focus on the value of personal relationships. Every character in the game has an opinion of you displayed as a single number, ranging from 100 (glowing adoration) to -100 (bitter hatred). These opinions are an indicator of how easily you can rule over and interact with them, with dozens of factors at play. Have you been ruling steadily for 50 years? Your constituents will respect you mightily if so. Have you broken a peace treaty with an emir lately? Expect your standing to drop considerably in the Muslim territories of North Africa. Even personal maladies you were born with will carry a lifetime of social stigma if you happen to be one of those unfortunate souls afflicted with a clubfoot or a hunchback.

Nurturing these relationships is a delicate but highly rewarding process, thanks to how well Crusader Kings II reflects the slippery nature of feudal rule during the Middle Ages. Each territory you hold is like a semiautonomous state unto itself, with your vassals (bishops, counts, and the like) supplying you with tax income and troops only if their opinion of you is high enough. Everyone in your chain of command has their own agenda, which creates a constant back and forth between you and your underlings. If you keep your vassals' troops engaged in combat for too long, they'll grow resentful, but if you send your child to be educated with them, you'll earn a significant amount of goodwill. The game is stuffed to the brim with these methods for pleasing or angering people, and there's a believable logic to the way people react that makes carefully managing your reputation immensely satisfying.

Equally important to your cause is managing the state of your family. When your character shuffles off this mortal coil, you take control of the first heir in line to the throne. And because the game combines each successive ruler's "prestige" score into one final tally, it's in your best interest to keep your dynasty going strong until the game ends in 1453. This encourages a careful style of decision making where you have one eye on the present and one on the distant future. So if you're prepared to marry off your son to the princess of a powerful foreign king to gain a military ally, you need to be careful because that beautiful young royal may happen to be devoutly religious or homosexual, which would decrease her fertility rating and, thus, your son's chances for producing an heir of his own.

Although each character is shown as a static portrait on a menu screen filled with statistics and personality traits, you wind up feeling a genuine sense of attachment to your next of kin. It's an oddly proud moment when you've granted your son his own duchy and he then proceeds to declare his first holy war against your religious opponents. But if you neglect your family members, they'll grow every bit as resentful as a foreign adversary; they may revolt in civil war if they've got the troops for it or plot to kill you with poisoned veal if not. Thankfully, the AI governing these characters is smart and reliable, rarely ever frustrating you with illogical behavior (unless that person happens to bear the insane personality trait). The result is a lasting and profound sense of ownership over your family's dynasty as it passes from one heir to the next.

While you can sit tight and play the role of a pacifist, the best way to build your dynasty is to overtake other territories and expand the boundaries of your empire. This task generally requires a careful combination of diplomacy, intrigue, and all-out military conflict. Building a powerful army is important, but it's far from the only ingredient necessary for success. For one thing, you need a casus belli (reason for declaring war) before invading a territory. This can be accomplished by a number of means, from collecting enough neighboring territories to usurp a claim on their land to sending in your spymaster (one of the five highly specialized members of your council) to fabricate a historic territorial claim through bribery and threats. Scheming your way into a war is an absolute delight that practically demands you be stroking a white cat and cackling maniacally.

Like declaring war, ensuring the strength of your army is something that's easier said than done. Building an army is an expensive proposition in Crusader Kings II, so you need a robust economy before you spend money on new training structures in your various holdings. Likewise, maintaining an active army that is called up to war adds a big cost to your monthly expenses, making it easy to dip into the red and burn through your gold reserves in a hurry. Fortunately, Crusader Kings II provides plenty of ways for clever players to overcome these obstacles, such as calling in allies you've forged through arranged marriages, hiring mercenary armies, and even using your chancellor (another council member) to covertly spread dissent in a rival's territories to reduce their available troops and tax income.

Oddly enough, the battles themselves tend to be the least exciting part of your military strategizing. Crusader Kings II doesn't display full-scale conflicts but, rather, simplifies them into the abstracted image of two soldiers fighting against the backdrop of a three-dimensional European map. There's plenty of strategy to these battles, as clicking your soldier reveals a veritable spreadsheet of information that ranges from the types of remaining troops to which flank is getting hammered the hardest. No, the problem is that physically maneuvering your troops across the map becomes an awkward and clunky experience when your army swells in size. Many of your necessary commands are obscured behind a series of tiny windows and even tinier buttons as you try to make the most minor of adjustments. You wind up spending half your time pixel hunting when you'd rather be eyeing the progress of your battle as it unfolds in real time. It's certainly not enough to discourage you from entering into battle, but it can make engaging in long, protracted conflicts something of a chore.

But those moments of awkwardness in maneuvering your troops are more of an exception than a rule, as the rest of Crusader Kings II sports a well-designed interface. For a game as heavily menu driven as this, you rarely have to drill down into successive menus to get the information you want. The menus are also organized with a logical flow, with tabs following distinct themes (military, diplomacy, laws) and character screens that tell a comprehensive story about someone's life without overwhelming you with information. The interface is also heavily customizable, with the ability to take every conceivable event in the game and assign an alert priority to it or change the map overlay to color-code kingdoms, religions, historical claims, and the like.

It's a good thing the interface works so well because Crusader Kings II is an incredibly ambitious game with a complexity that is hard to overstate. Unfortunately, the tutorials don't do a good enough job of making you feel comfortable with all of it. They're very much a case of quantity over quality: there are tons to choose from, but many are simply text blurbs that quickly explain a concept without giving you the chance to try it for yourself. And the interactive tutorials the game does have often feature buggy scripting, which breaks the sequence of text windows if you accidentally perform the wrong command in the game. These tutorials wind up providing a little bit of helpful guidance, but once you start playing, you realize it was like being given a firm handshake before being thrown into the deep end of an Olympic-sized swimming pool.

But don't let that discourage you from giving it a go because even in spite of its learning curve, Crusader Kings II is absolutely worth the time investment. In fact, you can make learning its nuances a group effort by way of the game's 32-player online multiplayer mode. Here, you can get together with a bunch of friends (or strangers, using the solid matchmaking tools) and take control of various rulers or vassals while you all play simultaneously on the same map. Playing the game against real people adds a lot of excitement, whether coordinating with human allies in a combined war effort or rubbing their noses in a failed assassination attempt.

It's that scale and potential for one entertaining story after another that make Crusader Kings II so engrossing. There are so many little interactions for you to experience and so much potential for a payoff when your planning and scheming finally come to fruition. It can certainly be daunting, so it's unfortunate that Crusader Kings II doesn't do a better job of teaching you all the ins and outs of ruling a feudal state. But if you allow that fact to scare you off, you'd be doing yourself a grave disservice. Crusader Kings II makes it an absolute delight to rewrite history one small step at a time. 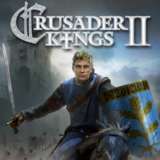