Costume Quest is a rudimentary, turn-based role-playing game. There aren't any multitiered tactical options; there aren't layers of leveling systems or branching skill trees; and there aren't lists of equipment with granular attributes. There isn't even a map to guide your party of tots on the most admirable of journeys to rid the land of monsters, recover a kidnapped sibling, and feast upon a bounty of delicious treats. Yet, for all the things it lacks, writing Costume Quest off as nothing more than a simple RPG does it a great disservice. The game reimagines the familiar festivities of Halloween night, creating a clever and engrossing foundation upon which all the other facets of the game are built. It's the nostalgic glee that drives you to go on an adventure through three separate locations and knock on every last door. It's the excitement of assembling a new costume and seeing what it can do and how an imagination can transform it. It's the realization that the battle system offers more depth than it seems, thanks to the different costume abilities. All told, it's a game that offers more than the sum of its parts.

Still, Costume Quest's undeniable charm is also the reason it stumbles early on, particularly in regards to trick-or-treating. Marching from house to house and knocking on doors is how you earn the majority of your candy, which you can then spend on stamps that serve as special in-battle abilities for each character. It's also a major component of the progression system. You can't go to a new area until every resident has been prompted to fill your bag to the brim with tooth-decaying goodies. Of course, there isn't always a friendly neighbor behind those doors. Sometimes grubbins--monsters sent by the evil witch Dorsilla to steal candy--will leap from the shadows, forcing you into battle. This all makes perfect sense for a game about Halloween, and as such, it's one of the more endearing characteristics of Costume Quest. That is, until the irritations of a forced battle system creep to the forefront and trick-or-treating suddenly becomes a chore.

To its credit, Costume Quest successfully confronts traditional problems associated with such a battle system in some simple ways. For example, your health always resets after a battle, so you don't have to worry about making sure your party is adequately prepared for an unforeseen fight. Likewise, if you get locked into a fight and don't have the proper costume or stamps equipped, it's easy enough to run away from the battle and regroup because the game doesn't penalize you. What's left is simply the repetitive nature of being forced to battle in rapid succession if you do most of your trick or treating in one go. This is something Costume Quest can't confront without expressly telling you to sprinkle other quests in between your trick or treating visits to vary things up a little, but these fights account for the bulk of your adventure, regardless.

It's this forced repetitiveness combined with the lack of costumes (and lack of party members to wear them) that creates a sense of tedium in the first few hours of Costume Quest. Each of the 11 costumes in the game comes with a standard attack, combat abilities that require a charge phase, and an active or passive skill enabled by stamps. Combat abilities are particularly important because they are the heart and soul of the game's strategic element. Since they're either offensive or defensive focused, you can produce certain combinations of costumes and stamps that ultimately complement each other. For example, you can try going in with two team healers and a damage dealer with a healing stamp equipped or you can try the brute force approach and just have three damage dealers equipped with extra hit point or counterattack stamps. While it isn't necessary to switch costumes and stamps before every fight, it feels rewarding to stumble upon a combination that works for you. The lingering issue is that this aspect of the game doesn't really kick in until you have all three party members and enough costumes to function strategically, which--depending on how diligent you are about finding all of the candy, hidden items, and various costume components--takes a couple of hours.

Once Costume Quest hits its stride, the rest of the game rises up and races right along with it. Suddenly, trick-or-treat battles aren't quite as tedious. The quests are even more entertaining because they make greater use of a costume's exploration ability while moving around the world (the knight costume, for example, can deflect falling debris and water and gain access to hidden areas). Additionally, some light stealth elements come into play as enemies now patrol the hallways, looking for children to terrorize, but they're easily avoided, thanks to exploration powers of a particular costume. But these enemies are a great source of extra candy and good fodder for level grinding if the need exists.

While this means it takes a while for everything to click in Costume Quest, the clever writing and wonderful art style are hugely entertaining even when the game mechanics aren't as impressive. From the three main children and the youngsters just hanging out to individual monsters, nearly every character in the game continually spouts memorable one-liners, but it's not just the dialogue that's funny. Smaller details like the names of stores in the mall as well as those of the collectible candy cards are equally humorous. But, of course, the main attraction is the art and how Costume Quest so effectively pays tribute to Halloween through its visuals. The suburban neighborhood, the mall, and the fall fair represented are all meticulously decked out with jack-o'-lanterns, skeletons, and other suitably spooky icons of All Hallows' Eve. When Costume Quest transitions into its battle sequences, the soft art style transforms into something more realistic as costumes and enemies come to life in grand fashion, much like they probably would in a child's imagination. Unfortunately, poor camera angles and cluttered (if not just needlessly large) display information also obscure and overwhelm what's happening onscreen during battles and some odd framerate issues creep up during the adventure portions of the game.

Without question, the art and overall premise serve as Costume Quest's biggest hook, and these things are ultimately what drive the game and turn it into something much more than a superficial RPG. Still, whether or not you can overlook and overcome its initial shortcomings is tied directly to how much you buy into its premise on a nostalgic and comedic level. That said, when Costume Quest picks up steam and truly reveals all it has to offer from a gameplay perspective, it relies less on that premise and simply delivers an all-around satisfying gaming experience. 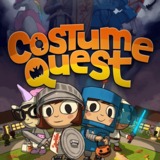