Despite some quirks and bugs, Cossacks II captures the stately carnage that was the Napoleonic Wars.

With this year marking the 200th anniversary of the Battle of Trafalgar, it seems a bit fitting that the Napoleonic Wars seem to be getting a little more attention than normal. Case in point is Cossacks II: Napoleonic Wars, the follow-up to 2000's Cossacks and the latest game in the real-time strategy series. In a way, Cossacks II marks the first major upgrade for the franchise, as it sports a much updated graphical look, as well as some significant new features. The gameplay, however, remains unmistakably Cossacks, which is good news for fans of the franchise. Newcomers, on the other hand, will discover a somewhat quirky but enjoyable real-time strategy game that focuses on formations and tactics rather than base-building and tank rushes.

In Cossacks II, you take control of one of six great powers of the era and attempt to settle your differences on the open field of battle, like civilized gentlemen. The game features a single-player campaign that's a bit loose with the facts for dramatic purposes, a battle for Europe campaign with both turn-based and real-time elements, and a variety of skirmish and historical engagements. At the heart of Cossacks II, though, are the real-time strategy battles that remain relatively unchanged from the earlier games.

When you get down to it, Cossacks II is a real-time strategy game for history fans. This is a big game with battles that take place on huge maps dotted with villages and towns connected by roads. You'll have hundreds of peasants gathering resources and building a variety of structures, while formations of 120 men march to and fro across the map. As in real life, roads play a strategically critical role in warfare, since they're the only efficient means to march men across the map. Thus, you can create blocking positions at key crossroads, and you get to feel like a real field marshal as you attempt to maneuver your army around the map.

The combat in Cossacks II is very faithful to the era, so you have the fun of marching your formations on to the battlefield, lining them up, and firing at the enemy. This was the era, after all, when armies stood in open field and exchanged fire until one side shattered and fled. Despite the apparent simplicity, there was actually quite a bit of strategy involved, especially since it took upward of a full minute to reload muskets. Fire too early and the enemy would make you pay while your men were busy trying to reload. Thankfully, the new color-coded range system lets you hold your fire until your men can see the white's of the enemies' eyes, or, in this case, until they enter the red zone, which is helpful in gauging the effectiveness of your volleys. The artificial intelligence of your opponents varies, but generally it's pretty good about finding your flank and trying to lure you into wasting a volley. If you fire prematurely, the computer will waste little time in exploiting the fact.

You can also select from three different formations, depending on your tactical position, and you also have to worry about your men's morale, as well as their fatigue level. Furthermore, you have cavalry and artillery at your disposal. However, the infantry represents the core of your army, so it'll do the majority of the fighting, as well as the majority of the bleeding. Thankfully, you can pull depleted formations out of battle to send them to the nearest friendly village, where they will replace their losses. However, if a formation takes too many losses or loses too much morale, it will break and shatter, meaning it's out of the fight for good. It's also critical to capture villages, which are the source of the various resources in the game, including iron, food, coal, and gold. Food and coal are particularly important, because your army's logistical needs mean you must secure these sources, or else your army will starve to death or run out of bullets. Unfortunately, we wish the same could be said for the enemy, because during the single-player campaign, we noticed that even after choking the enemy off from all sources of supply, it still managed to keep fighting for a pretty long time.

We mentioned before that the single-player campaign is a bit loose with the historical facts, and that's an understatement. The campaign puts you in control of a British officer trying to save God, king, and country (not to mention his fiancée) from some rebellious nobles in league with the French. The dastards even go so far as to besiege London! Melodrama aside, the campaign features some static cutscenes and dull voice acting, and it only exists as a contrived reason to stitch together some missions that vary in difficulty from challenging to frustrating. In fact, one starts you off in such a horrible tactical position that it takes hours and hours, not to mention a large amount of saving and reloading, to claw your way to victory. Unfortunately, there's no "easy" difficulty setting in the game, and one of its strange quirks is that "normal" is the easiest difficulty setting available. And it only gets harder from there.

After you're done learning the ropes with the single-player campaign, you can then tackle the Battle for Europe campaign, which adds a turn-based strategic layer to the game, kind of like the one featured in Medieval: Total War...only simpler. You control one of six nation-states, and you get to capture provinces, build defenses, and move your army around the map of Europe. While the turn-based strategic layer is a nice addition, it's a bit lacking, especially since it doesn't take into account naval combat, which played a pivotal role during the Napoleonic Wars. As a result, it's possible for France or any other power to invade England from across the English Channel, though it will need a sizable army to capture the heavily defended London. There's also a lack of depth that separates Cossacks II from other strategy games with turn-based modes, because you only get one army stack to push around on the map, and the only building options at your disposal are to increase the defenses in a territory.

On the flip side, the lack of depth can make for a fast-paced game, especially since the real-time battles unfold differently from the ones found in the single-player campaign. Instead of grinding battles of attrition, the battles are relatively quick, since your main task is usually to shatter the enemy's will to fight. It helps that logistics play a big role during battles as well. For example, you go into battle with only the resources you gathered during the turn-based portion. This means it's possible to encounter critical shortages that can cripple your army. If you don't have coal, your army can't shoot. It also means you'll want to capture key territories from the enemy. Seize someone's coal-producing territories, for example, and he, she, or it will have a hard time fighting you on the battlefield.

Multiplayer offers some interesting modes, including Land War, which lets players from all over the world battle it out for parcels of national territory on a map of Europe. Simply choose a nation to attack and you're matched up against a comparable opponent based on you and your opponent's ranks. If you win the battle, you win a small piece of that nation for your country. Multiply this by hundreds of matches, and eventually a group of players can try and conquer a nation whole.

Meanwhile, Cossacks II offers some traditional skirmish battles, which you can play in a head-to-head game or in teams. Playing in a team can be fun, especially since you can offload some of the workload to your teammate; one can handle production and building while the other manages the armies. However, the large skirmish games can take a very, very long time to resolve, especially if both sides manage to build up defenses and large armies. Unfortunately, you can't play the Battle for Europe campaign in multiplayer, so you're restricted mainly to skirmish games, battles, and the Land War.

The presentation of the game has improved quite a bit from its predecessors. The 2D graphics engine remains, but it's been upgraded and is a lot more colorful and richer in appearance than before. The designers have a much larger color palette to draw from this time around, so the terrain feels a lot more organic and natural, rather than drab and uniform like it was in earlier games. Meanwhile, though your formations and men animate well, you wish you could zoom in and inspect them up close. Unfortunately, the game has a fairly limited zoom capability, and while you can zoom out for a more strategic view of the map, you can't zoom in. In a nice touch, though, Cossacks II is stuffed with video clips of Russian Napoleonic War reenactments, which play in a small window to give you an idea of what actual soldiering was like. There's not a lot of variety, however, and the game loops through the same clips over and over. But at least it's not obtrusive. The same can't be said of the overly bombastic, synthesized orchestral music, which gets inside your head like a bad song on the radio.

Cossacks II is also plagued with some little bugs, and it can crash or freeze up on occasion. A more frustrating issue is that trying to load certain saved games can cause the game to crash, meaning you'll either have to revert to an earlier "working" save or start a mission over again. To avoid a lot of heartache, it's best to use several different save-game files rather than one universal save, because if it becomes corrupt, you'll have to start over.

There's a formality to the warfare in Cossacks II, and it makes for an enjoyable game with a statelier pace than most other real-time strategy offerings, which are basically clickfests. The game takes quite a number of liberties, but overall it presents a good mix of gameplay and historical accuracy, though it doesn't go overboard in either direction. So if you're a fan of the period, it's definitely worth checking out Cossacks II. 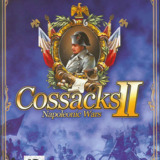