Contra's about two Rambo-looking guys who run around and shoot alien soldiers. These guys are attempting to make their way to the heart of the alien lair and defeat their leader. Helping you out along the way are a series of weapon power-ups that give you spinning fireball shots, a faster firing machine gun, and a laser. You also get one of the all-time great weapons, the spread gun, which fires a wide spray of bullets. You'll use those weapons to take out some human-looking soldiers (but trust us, they're evil, they're aliens, and you have to stop them) along with some turrets, some boss creatures, and other assorted bad guys. As an arcade game, the action doesn't last a particularly long time. In fact, one of the game's achievements asks you to finish the game in less than 12 minutes. This is an impressive feat, but not an impossible one. Although most of the other points in the game are pretty easy to earn, finishing the arcade mode on one credit is probably the game's toughest achievement.

Beyond its weapons, one of the big things that sets Contra above other games back when it was released was its two-player cooperative play. You can play two-player games locally, but it also has Xbox Live support for online play. Like a lot of the other Konami Xbox Live Arcade games, online performance can be a bit spotty. We got into some games that ran just fine, but others were a choppy, laggy, unplayable mess. When it comes to network speeds and online play, your mileage may vary. Like many other Xbox Live Arcade updates of old arcade games, Contra defaults to an upgraded mode that has new graphics and sound. If you like, you can turn either or both of these new things off. The graphical changes are pretty subtle and look more like a filter that's smoothing out the existing graphics rather than a complete overhaul.

Once you get past the arcade vs. NES debate, Contra plays accurately, and when you get a good connection, the true co-op gameplay is much better than the side-by-side co-op that many other Konami games have been doing on Xbox Live Arcade. If you're a fan of any version of Contra, you might want to give this one a look. 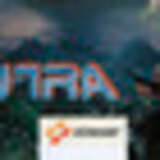