When Company of Heroes shipped last year, it proved that there's plenty of life in the World War II real-time strategy genre if companies take risks and innovate. THQ and Relic's superb real-time strategy game did that by blending in so many cutting-edge elements that it made the battlefield come alive like rarely before. Thanks to impressive artificial intelligence that made soldiers move and act like the real thing, as well as the tactical implications of a spectacular and fully destructible battlefield, Company of Heroes was a game that rewarded smart and quick thinking. With an excellent single-player campaign and thrilling multiplayer gameplay, it was also named GameSpot's 2007 PC Game of the Year. Now, just slightly a year after it was released, THQ and Relic have released Company of Heroes: Opposing Fronts, a fairly straightforward and satisfying follow-up that delivers more content for would-be Pattons to enjoy.

Opposing Fronts is more of a pseudosequel than an expansion pack. You don't need the original Company of Heroes to play it, though if you do you'll be able to select from the US Army and regular German Army factions from that game in skirmish matches. Otherwise, you'll be restricted to the two new factions introduced in Opposing Fronts: the British Army and the German Panzer Elite. These factions both get their own campaign that, when combined, make for a longer single-player experience than Company of Heroes. Interestingly, the campaigns are staggered so that they're in nonlinear order. You'll begin with the story of two German brothers battling against the daring airborne assault of Operation Market Garden, and in the following campaign you'll leap further back into the past to participate in the British Army's lengthy and bloody assault on the French city of Caen.

The heart of the expansion can be found in the new factions. Both play quite differently from the US and German factions in the first game, and though you needn't have played Company of Heroes to dive into Opposing Fronts, it's hard not to shake the feeling that the British and Panzer Elite are designed for veteran players. That's because their mobile nature makes them a bit more of a handful to control than the prior factions. To clarify, the Panzer Elite is built around the idea of hard-hitting and fast-moving combat groups that can race around the battlefield, either to counter what the enemy is doing or to exploit an opening. To that extent, the Panzer Elite doesn't so much lock down territory as it bulldozes its way across the map. Thankfully, Panzer Elite infantry can repair vehicles during slight pauses, but you won't have a lot of time to hunker down before another situation needs putting out.

At first glance, the British Army seems to be built similarly around the idea of mobility and defenses, given that it has mobile headquarters units that can relocate around the map. However, the British also excel at building things: devastating howitzer emplacements, mortar pits, slit trenches, and more. As one might expect, the campaign missions highlight each faction's abilities quite nicely. In the brutal house-to-house fighting of Caen, the British can call in the dreaded "creeping barrage" that shatters enemy lines. Likewise, the Panzer Elite can punch through Allied defenses and raid around their rears to capture or destroy landing points for airborne forces.

Opposing Fronts doesn't add any significant new gameplay features to Company of Heroes. The most noteworthy new additions come courtesy of the new faction doctrines, such as scorched-earth tactics for the Axis. These upgrades let you booby-trap buildings so that enemy infantry who enter them are in for a big surprise, and also let you blow up strategic objective points to deny them to the enemy. Both factions have three different upgrade paths to choose from, and these can help tailor the game to your style or tactical situation.

Multiplayer was a key part of Company of Heroes' success. The destructible battlefields and finely balanced gameplay can make for countless nail-biting moments online. Finding battles was also easy, thanks to the top-notch server browser. Not surprisingly, Opposing Fronts doesn't tinker with what's not obviously broken. The only caveat is that it's a bit difficult to find a game online around launch, so hopefully the community will pick up. If you can't find a match, there's also skirmish support with a wide range of AI opponents. If you want to learn the basics, you can lower the difficulty to pushover status. On the other hand, if you want to test your skills against ruthless and relentless opponents, then just ramp up the difficulty. As before, there are two game modes. There's annihilation, which is basically a standard deathmatch that can be played from one-on-one up to three-on-three, as well as victory-point control mode, which is a great alternative to annihilation. That's because victory-point control forces you to battle for three control points on the map. If you let the enemy hold on to them for too long, you'll lose, so there's a constant level of tension throughout most of the game.

The presentation and production values are excellent, and it never gets old watching buildings collapse or vehicles explode in huge fireballs. Artillery actually carves out craters that infantry can use for cover. If the enemy has a defensive chokepoint, then you can use your tanks or artillery to blow open another path. Opposing Fronts does add weather effects, such as a heavy rain that drenches the battlefield, but for the most part the visuals are otherwise indistinguishable from last year's game. Even with DirectX 10 support, which was added to Company of Heroes via a patch, it's hard to see any huge improvements. Still, the graphics remain impressive and still feel fresh. The audio is also excellent. Both campaigns have their own unique music, and the British campaign in particular is inspiring. Furthermore, the sounds of battle are some of the best around. If there are explosions onscreen, you hear them full-on; if you move the camera away from the explosions, they become muted and distant.

Opposing Fronts doesn't revolutionize the genre like its predecessor did, but at the same time, no one has really caught up with Company of Heroes yet, either. Sure, games such as Supreme Commander push the science-fiction RTS genre in cool new directions, but the World War II RTS genre has yet to learn the lessons of Company of Heroes. With Opposing Fronts, THQ and Relic keep a great thing going. 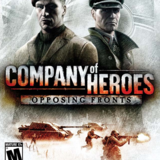 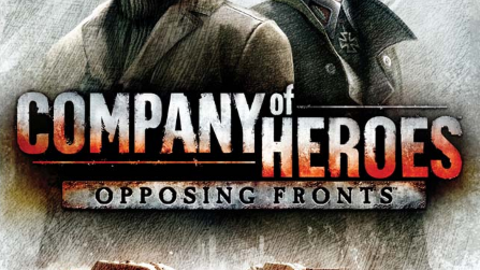 THQ brings the next chapter in the real-time strategy franchise.

8.6
Sign In to rate Company of Heroes: Opposing Fronts