Company of Heroes 2 is an entertaining strategy game that excels when it pulls out all the stops.

It is said that war never changes; war's intensity, its perils, its world-shifting consequences remain unflinchingly true. Company of Heroes 2 demonstrates this weary axiom by overwhelming your senses with the heat and light of battle--battle that closely recalls the kind of skirmishes you once triumphed over in the original Company of Heroes. This is not a real-time strategy revolution, but a fun revival of enduring mechanics that pulls you into the trenches of the eastern front.

Given the series' penchant for explosive multiplayer confrontations, you might be inclined to overlook Company of Heroes 2's campaign, though you would be missing out on some of the game's better moments in doing so. The narrative is not, however, a return to form for developer Relic Entertainment, whose Homeworld games brought RTS storytelling to great heights. Given the excellence of many of the campaign missions, it's disappointing that the surrounding cutscenes can't meet their levels of excitement, try as they might. It's best to ignore the decidedly old-looking cinematics, the cast's uncomfortable accents, and the cliched attempts at dramatizing a strained soldier-commander relationship. Instead, let the missions themselves do the talking; the best ones communicate the hopelessness and despair the cinematics fail to capture.

Even early missions impress upon you the disposability of your troops, frequently commanding you to retreat when you are overrun, all while you order in one nameless conscript squad after another. Interesting new mechanics, too, effectively communicate the helplessness of an individual combatant, and not only during the campaign, but in AI skirmishes, online multiplayer, and elsewhere. On snowy maps, the fearsome rush of cold and wind don't just make for a chilly sight, but also make for chilly soldiers. Soldiers feeling the frosty sting need a warm fire (provided by a resourceful engineer or pioneer) or the confines of an available structure to avoid succumbing to a frigid death. Infantry trudge slowly through drifts of snow, and crossing an icy pond could prove fatal if the weight of a tank--or the eruption of a grenade--proves too much for the flimsy ice to handle.

And so you don't confront just the forces of the enemy, but the forces of nature too, and make important tactical considerations in the process. Do you risk sending unprotected soldiers to a desolate capture point, hoping they can make the trek without freezing to death? If it's later in a skirmish or multiplayer match, you might have half-tracks for transport purposes, but the possibility of an early lead might make it worth taking a gamble with a few squads. The weather is not an issue on every map, but when it's a concern, your usual tactical approach (say, leading a few squads around the map to capture victory points while advancing far enough to build heavy tanks) may not work well, if at all.

The campaign excels when making you feel the heartlessness of your commander's orders. Voice-overs frequently remind you that you are sending troops out to die for the motherland, and the endless stream of free conscripts most missions gift you on medium difficulty reinforce the idea that no one individual is indispensable. Unfortunately, this huge supply of free infantry makes it too easy to win by steamrolling across the map using sheer numbers. It's far more satisfying to win a mission by sending out multiple, carefully constructed control groups across the map and micromanaging their abilities. (Some infantry can toss Molotovs, and snipers can fire debilitating rounds, for instance.) Most campaign missions don't require that kind of high-end strategizing, however.

Even with the use of free soldiers, campaign missions still manage to be varied and intense. Some of the intensity comes from the chaos of tanks lighting up the map and artillery demolishing entire buildings that then collapse before your very eyes. These are spectacular moments from a visual perspective in a sharp-looking game, but rarely are such sights just for show. When a squad hits the ground, pinned by oppressive fire, it looks authentic, of course, but it also hinders your progress. A Katyusha's rockets might hit a structure and make a grand fireworks show, but that structure may be in the way of your actual target, forcing you to fully destroy it so your rockets can reach their mark--or to find a better position. Company of Heroes 2 is a one-two punch of powerful production values and nail-biting confrontations. Just bear in mind that you can't experience the fireworks if you are still using Windows XP, because the game doesn't support that operating system. Nor, for that matter, does it support dual video cards in Crossfire or SLI configuration.

Company of Heroes 2 excels when it sticks to its standard strategic formula. In a typical match, you start with a squad of engineers or pioneers and construct the necessary structures to pump out new units. You don't send out resource gatherers to collect wood and iron as you might in a traditional RTS game, but rather move infantry quickly across the map to capture victory points. At such points, you might build add-ons that increase your flow of fuel and munitions, which are the resources, along with manpower, required to create units. It takes a lot of time for the campaign to introduce its resource-gathering mechanics, however, so if you're new to the series, don't expect the campaign to do an entirely great job of getting you prepared to take on human opposition.

The campaign, however, isn't the only way to get in some offline practice. As is usual for an RTS game, you can play skirmishes against the AI, but there's another suite of options called the Theater of War. The Theater includes a number of cooperative and solo challenges, which are typically much more challenging than the campaign. While the campaign is focused on the Russians, the Theater includes both USSR and German missions, some of which are wildly intense and entertaining.

A Crimean mission, for instance, lulls you into a sense of security as you lead your German infantry from one victory point to another, only for legions of Russian tanks to invade your main base, less concerned with map control than with attacking the heart of your operation. Managing various infantry squads while using antitank weaponry and heavy armor to fend off the aggressive Russian army requires you to keep every scuffle under tight control. This is the kind of entertaining test of wits that shows Company of Heroes 2 at its strongest, and this intensity is replicated in other solo and co-op missions that have you holding off tank invasions and holding your own in the unforgiving winter.

Company of Heroes 2 occasionally deviates from formula, likely for the sake of variety, but reveals some fundamental drawbacks in doing so. Sniper-focused missions in both the campaign and the Theater are a bit of a slog in and of themselves, but also showcase odd enemy AI behavior, with squads moving out of the line of fire only to return to their starting positions, or simply not responding at all. Luckily, another puzzle-type mission is more successful, and has you hunting down a tank with a small selection of units that must scour the map for appropriate antitank weaponry. This game of cat and mouse is then contrasted by the following mission that concludes with an all-out assault on the citadel at the heart of Poznan. Having big tanks to play with is an appropriate reward for dancing around a similar armored hulk in the previous mission.

You might see all of this offline and cooperative play as the lead-up to Company of Heroes 2's multiplayer suite, and it's online that you see some of strategy gaming's finer moments, along with a few nods to modern gamification that don't improve the online game in any meaningful way. Balance is key to successful multiplayer matches, and the game mostly hits the right marks in this regard, with some exceptions. A miniature swarm of Panzer 4s or a couple of half-tracks stuffed with snipers can ruin your day in a hurry, for instance, and it takes a good bit of high-level online play before you can start managing your resources and find ways to counter units that seem too powerful.

Once you've reached that point, you've probably earned a relatively high rank--meaning you have also earned persistent unit bonuses, such as increased accuracy for your antitank guns, or increased damage for your T-34s. It's easy to bristle at the thought of units unbalanced by design, and at the need to grind levels for such small perks. Luckily, the bonuses are too small to affect you as you learn the ropes. By the time you level up high enough for the small enhancements to matter, you'll be playing opponents who are on equal footing, more or less.

What fun it is to face evenly matched competition. You see human competitors exploiting mechanics the AI never can, such as the authentic line-of-sight mechanic, which unveils the fog of war based on what the unit should be expected to see, rather than a set radius. A mortar team in the right nook can wreak havoc on your progress, forcing you to fire position-revealing flares or order expensive recon aircraft lest you continue to get blown to bits. The recon comes courtesy of your chosen commander, who affords you certain abilities you can perform once you earn enough commander points during the match. You might find air recon useful--but ordering in an artillery barrage or a flamethrower tank could also change the tide of battle.

Online battles can be wonderful. Your decisions from the very beginning of a match can have far-reaching consequences, from the way you handle your engineer or pioneers, to your ability to get infantrymen into cover, to the effectiveness of your flanking maneuvers. Careful planning can culminate in a tense standoff at a single victory point, with your tank rolling in at the last minute to pick off the remaining enemy shock trooper vying for point control. But heartbreak also comes, often in the form of a flame-spewing half-track capable of burning multiple squads to a crisp.

Of course, such multiplayer mayhem recalls the original Company of Heroes' best moments, and you couldn't accuse this sequel of reaching the heights of the classic that spawned it. This familiarity is unlikely to breed much contempt, however, given Company of Heroes 2's consistent level of enjoyment. Its barrage of online and offline skirmishes doesn't always hit its mark. But when it finds its target, Company of Heroes 2 delivers a loud and mighty payload.

View Comments (346)
Back To Top
7.5
Good
About GameSpot Reviews 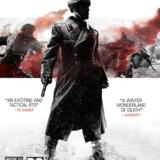 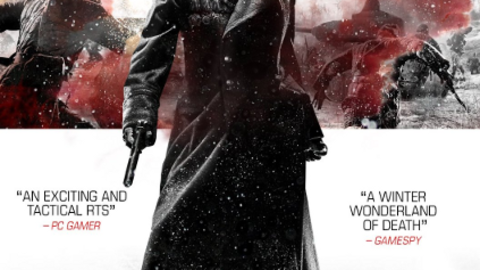 Company of Heroes 2 focuses on some of history's most brutal and devastating conflicts on the eastern front.