Comix Zone is a mediocre beat-'em-up that's supported by a unique gimmick.

By the time Comix Zone hit the Genesis in 1995, Sega's 16-bit, blast-processing console was a lame duck. Sega had done a thorough job of fracturing its own user base with the earlier releases of the Sega CD and 32X add-ons. Also, the whole system was about to be rendered obsolete by the Sega Saturn and Sony PlayStation anyway. On top of being on the wrong console at the wrong time, Comix Zone was a simple 2D beat-'em-up, a genre that had been pretty much beaten to death by 1995. In retrospect, the game's attitude is admittedly corny in a 1995 Tank Girl-The Crow-Cool World kind of way. What redeems Comix Zone today is its execution of the stuck-in-a-comic-book concept, which still makes it distinctly different from any other beat-'em-ups out there.

In the game's opening moments, you're introduced to comic book artist and ponytail enthusiast Sketch Turner. Sketch, during a freak lightning storm, finds himself trapped inside his own comic, while the mustachioed, monocle-wearing villain from his comic book pulls the strings from the real world. Hailed inside his own comic as "the chosen one," Sketch has to fight his way through panel after panel of mutants, monsters, and other ne'er-do-wells. Though you can use such items as knives, explosives, health potions, and your helpful pet rat, Comix Zone is a traditional beat-'em-up in content. You'll walk into an area, punch and kick some villains, and then move on to the next area. You've got a single attack button, though you can mix things up by using the D pad and throwing in the occasional jump. It's kind of a pain to play because you get only one life bar for the duration of the game's six levels, and even the simple act of punching stuff can whittle away at your health. It's not a long game, but it doesn't allow for many mistakes and can take a while to get all the way through.

Still, it was arguably one of the better-looking Genesis games and still looks pretty good for a 2D beat-'em-up today. The quality of Sketch's animations make the combat more satisfying than it would be otherwise, and the postapocalyptic comic book world you fight in features slick, colorful graphics. But what really makes Comix Zone worth playing is how committed it is to the comic book concept. Each level takes place on the pages of a comic book, and as you fight your way from panel to panel, you'll catch glimpses of other panels around the edges of the screen. Sketch will leap across the gutters between panels, and the fights are always peppered with speech bubbles filled with witty banter. A giant hand will regularly descend upon the screen and draw in enemies for you to fight, and the enemies will shed scraps of paper as you pummel them. One of Sketch's supermoves is to rip out a piece of the background and fold it into a damage-dealing paper airplane. He can also transform into Super Sketch momentarily, which causes a massive tear in the paper and kills any onscreen enemies. It's totally gimmicky, but it's a well-executed gimmick, which can be enough.

It's also worth mentioning that although the Virtual Console version of Comix Zone says it can be played with just the Wii Remote, you really need either the Classic Controller or a GameCube controller because it's impossible to use the D pad and the A button on the Wii Remote at the same time. If you're looking for a genuinely good beat-'em-up experience, wait for Final Fight or Streets of Rage to hit the Virtual Console. If a little novelty is all you want, Comix Zone has got it in spades. 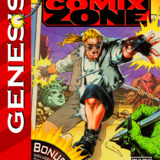 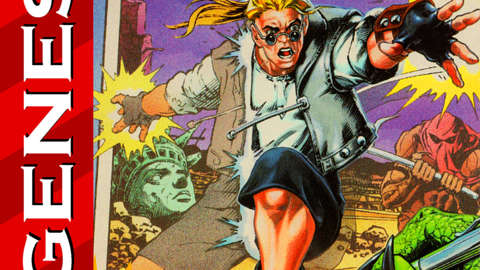