Dr. Mario's production values don't quite measure up to today's standards even for a puzzle game, but the gameplay has held up well, and the wireless networking is a great feature.

Dr. Mario was originally released in 1990 for the NES and the original Game Boy handheld system. At the time, Dr. Mario was one of many Tetris-like games that was released to ride the coattails of Alexei Pajitnov's puzzle classic, whose popularity was at an all-time high. Dr. Mario turned out to be one of the better Tetris clones, which is probably why it has been released for the Game Boy Advance as part of the classic NES series. And like any good puzzle game, Dr. Mario's addictive style of gameplay has stood the test of time; the inclusion of wireless networking capability adds even more value.

The GBA version of Dr. Mario is basically a straight port of the NES version. For those unfamiliar with the original, the gameplay centers on a medicine bottle-shaped playing field. This field is filled with small, wriggling viruses of three different colors: red, blue, and yellow. Dr. Mario stands off to the right of the bottle, tossing in vitamin capsules that consist of combinations of the same three colors. You must stack like-colored capsules onto the viruses in order to clear them out. Four or more of the same color vertically or horizontally will result in a clearing of the vitamins and viruses in that stack or row. The stage ends successfully when all the viruses in the bottle are cleared out, and you lose if you allow your pills to stack all the way to the top of the bottle. As you'd expect from a puzzle game of this type, you can rack up bonus points for chain combos.

The fun and challenge in Dr. Mario lies in the intense concentration it takes to clear ever-denser colonies of viruses using capsules that fall faster and faster. Does this remind you of Tetris? Dr. Mario also has the sadistic tendency to send you capsules of colors you don't need at critical junctures, in much the same way Tetris seemed to withhold the straight pieces at inopportune moments. Weathering these crises is all part of the fun.

Graphically, there isn't much to Dr. Mario, but a puzzle game doesn't necessarily need a lot of flash. You've got the playing field in the center of the screen with the wiggling viruses. Mario, in a doctor's outfit, stands at the top right corner of the screen tossing in the vitamin capsules. In the opposite corner is a petri dish with larger cartoon representations of the three different colors of viruses. Each one writhes in agony every time you clear one of its brethren. Scores and level information are kept in boxes that resemble clipboards, keeping in with the game's medical theme. Sound-wise, there also isn't much to the game, aside from blips and chimes. The game's two catchy music tracks, "fever" and "chill," are the highlight of Dr. Mario's audio.

Two-player capability is included in Dr. Mario via GBA link cable or wireless adapters. In the two-player mode, both players' bottles are visible onscreen. Matches are played best out of five, and each player can set his or her own handicap with regard to virus density and the drop speed of the vitamin capsules. In head-to-head matches, chain combos are rewarded by random-colored blocks dropping into the opponent's playing field. There are no special blocks or other types of power-ups though, so multiplayer Dr. Mario may come off as simplistic to those who've gotten used to more recent games like Puzzle Fighter. For those who see the beauty in simplicity, multiplayer Dr. Mario is fun and fast paced, and it can be very satisfying to mess up your opponent by completing several chain combos.

Dr. Mario is also compatible with the wireless adapters that were released alongside Pokémon FireRed and Pokémon LeafGreen. The adapters work very well and are effective to a range of several yards; no direct line of sight is required. The range of course decreases depending on walls or other obstacles in between the two players. This feature should come in handy for players in large cars, buses, or airplanes where a wire blocking an aisle could end up being a hindrance.

The GBA version of Dr. Mario is a great emulation of the original NES game. The production values of the game don't quite measure up to today's standards even for a puzzle game, but the gameplay has held up well over the past decade and a half, and the wireless networking is a really nice feature. If you were a big fan of the original, or you're in the market for a Tetris-like puzzle game for your GBA, Dr. Mario is a worthy purchase. 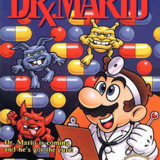