City of Villains doesn't always make you feel evil, but it's an engrossing bookend to City of Heroes' attractive MMO concept.

You've tired of the pitiful battle cries of those self-righteous, meddling heroes of Paragon City. You'd like nothing better than to strap on your darkest cowl, tattoo your face with arcane symbols, and begin wreaking havoc on any mewling citizen that dares step in your path. Welcome, fellow fiend, to City of Villains, the sequel of sorts to NCSoft's City of Heroes, which was released in 2004. Considered as a stand-alone game, City of Villains delivers only a marginally different experience than its predecessor, though it includes, most notably, player-versus-player combat. When played as a companion game to the original, City of Villains closes an obvious open loop in NCSoft's MMO world of heroic do-gooders and dastardly deeds, and remains a very fun game in the process.

One of the best features of City of Heroes, the character creation tool, is enhanced in City of Villains and offers the willing tinkerer more power than ever before to bring out his or her mad scientist or hulking blood-craving demon. New outfits and accessories galore, even some new body parts and head types, find their way into COV's character creation tool, and you even have the ability to focus on specific areas of your supervillain's physical makeup, such as shoulders, chest, legs, and so on--so you can really drill down and get detailed.

Of course, all of this is just window dressing for your created character; the core decision you'll need to make--the one that will define your villain's path in the game--will be its archetype. City of Villains offers five archetypes to choose from, some of which are analogues to those found in City of Heroes. The brute, for example, prefers to do his or her hero-bashing up close and personal--and, as a result, plays similarly to the tanker archetype in COH. Other character types found in the game are the offensively minded stalker; the corrupter, who deals primarily in ranged attacks; the will-bending dominator; and the mastermind, who is able to summon a variety of henchmen to do his or her bidding.

While there are comparisons between archetypes found in COH and those in Villains, there are some key differences that keep things fresh. Dominators, for example, have a dominator bar that, when filled, lets the character activate a special domination power that boosts their offensive powers, while brutes have a similar bar that measures their fury level. Of the new archetypes, the mastermind class seems especially inspired. With a number of different henchmen types to summon--from ninjas to robots, zombies to soldiers--the mastermind can effectively become a one-man army, capable of either soloing effectively, or nearly doubling the size of an already well-stocked team of villains.

If you've spent any time saving damsels in distress or mowing down lackeys in City of Heroes, you'll be surprised at how quickly you re-adapt to the missions in City of Villains. This is partially due to an accommodating and user-friendly interface that is easy to learn and as flexible as you need it to be. Windows can be moved and resized at your leisure, and macros and hotkeys are easy to set up. Familiarity also comes because, to a large degree, the missions in City of Villains feel very similar to those in City of Heroes. But there are new ways to pick up missions--through a number of different types of contacts, including various brokers (who set up special missions for you), a disreputable car radio, and the Rogue Island Protector, a newspaper from which you'll be able to pick various missions.

For the most part, the mission types revolve around one or more of a select number of goals: Find an object, destroy an object, find a person, or destroy everything in sight. In fact, with just a switch of the verb, many of the exact same mission types found in City of Heroes have been appropriately "villainized" here. Whereas in City of Heroes, for example, you might "save" a scientist from the clutches of some ne'er-do-wells, in City of Villains, you "kidnap" your target from under the nose of the heroes on hand to protect him or her. Wiping out an instance full of heroic Longbow agents infesting a warehouse isn't much different from cleansing a warehouse full of mystical Tsoo warriors, after all. Except for certain missions--such as when you break into a bank vault and steal the cash hidden inside--you never feel that "evil" when you're running around playing the game. And while there are some new instance environments to battle your way through (a high-tech Arachnos base and shipping freighter are two standouts), you'll find yourself ripping your way through many of the same sewers, office buildings, and cave environments that you were diligently looking to preserve back in your heroic days.

As in City of Heroes, combat in Villains is interactive enough to keep things interesting, but not to the point of becoming too stressful. It's easy to preload attacks as they recharge, which gives you ample opportunity to keep an eye on your health meter or configure your enhancement and inspiration buffs. The mastermind class is a slight exception; you'll not only be responsible for your character's health, but the health of your minions as well. On the flip side, the mastermind lets you effectively reach mission objectives quickly, while your underlings dole out the punishment in your stead.

The straightforward nature of the basic mission types still makes for simple beat-'em-up fun, while strike-force missions--longer, more involved tasks that usually culminate in a cataclysmic showdown against a powerful superhero--are time-consuming and appropriately epic in nature. And, just as before, City of Villains truly shines when played in a group--there are simply few better experiences in the MMO genre than teaming up with a collection of like-minded villains and tackling missions. Each archetype's abilities are powerful in their own right, and, when used in a team context, are designed to complement one another to great effect. Furthermore, if you're finding the single-player missions to be too tough (or too easy, for that matter) you can dial the difficulty up or down by visiting select contacts and changing your reputation to reflect your desired level of challenge.

Still, the main reason to run these single-player missions and level up your character--the reason to buy this game in the first place, for most people--is the promise of taking on those meddling heroes through the COV's long-awaited PvP combat. Multiplayer combat takes place in a number of specially designed zones strewn across the Rogue Isles (as the new lands of COV are known). These zones are separated by level requirements (you can't reach the game's first PvP zone, Bloody Bay, until hitting level 15, for example), but you'll frequently see characters of a much higher level battling along with lowbies in a fight to the finish (or at least until you can revive yourself again).

Luckily, dying in PvP doesn't come with the same, sometimes hefty experience-debt penalty that is found in the main game--a good thing too, because you can expect to die frequently in PvP scrums, which can often involve many dozens of characters, often resulting in you wondering just what is going on at any given moment. In our experience, there was also a distinct PvP advantage for players whose alter ego had the ability to fly out of hairy situations--so, design your combatant accordingly. Just as in the PvE areas, however, the best PvP combat groups are those who are varied in powers and willing to work together towards a common aim.

These sorts of straight-ahead bashfests don't offer much in the way of PvP variety, and with this many characters onscreen at once, you can expect some serious chugging, even on purpose-built gaming machines. The good news is, taking the fight directly to your opponent isn't all there is to do in these PvP zones. Zones also have special missions you can undertake that play exactly like the regular single-player missions, but have the benefit of offering offensive or defensive buffs for all villains in the PvP area, or offensive and defensive debuffs against all the heroes in the area. These benefits, along with the added danger of simply traveling in these hot zones, where a squad of real-life heroes on patrol could be behind any building in the area, add a real sense of danger and excitement to the sometimes humdrum nature of the missions.

Supergroup bases are another fine addition to the City of Villains expansion, and the ability to design your evil lair is a fun activity that adds a real sense of esprit de corps to your supergroup. There are a number of basic templates for your HQ--from medieval stonedungeon to a state-of-the-art high-tech look; and the more prestige your supergroup members earn, the bigger you can make your HQ, and the more stuff you can buy for it. That stuff can include decorative items such as office cubicles (for that all-important supervillain paperwork), pulpits, benches, and bookshelves, and vital items, such as power generators and work benches, with which you can transform salvage you pick up from defeated foes into more useful items and components.

City of Villains' graphics are necessarily much like those of City of Heroes. Player models aren't terribly detailed, but they have enough comic book charm to be appealing--you'll find yourself stopping often in midflight (or midsprint) to admire a villain's particularly well-designed costume. The Rogue Isle environments are spacious and well designed, with plenty of nooks and crannies, low-lying buildings, and impossibly tall skyscrapers. Many of these environments are designed with a decrepit feel of urban decay that adds a sense of foreboding to the game--an effective twist from the typically bright and cheerful environments of Paragon City. The instance environments that aren't recycled from City of Heroes are generally interesting, though we found that the Arachnos Base environment was a serious system hog. The same can be said during pileups in PvP, where things can slow down to a crawl, even on generously equipped gaming systems.

Much of COV's audio landscape is recycled from COH, especially the sounds of your powers. Superpunches and energy blasts still provide that same punchy shock, as do shots from your rifle and many of the enemy attacks; but there doesn't seem to be a lot that's new going on. Though it might not be practical from a gameplay standpoint, there's a perverse part of us that wishes we could choose a voice for our nefarious creations, in order to hear them speak their trademark battle cries in appropriately sneering tones.

Of course, affecting that sneering tone, mowing down self-righteous do-gooders, and enacting insane plans for world domination is exactly what City of Villains' gameplay aims for. It doesn't always find its mark--you don't necessarily feel like much of a villain, and it's easy to get slogged down in missions that don't feel very different from City of Heroes. Still, if you're willing to commit to the spirit of the setting, City of Villains completes the circle of comic book adventure and makes it awfully fun to get in touch with your inner evil mastermind. 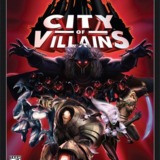