Although it lacks enough bells and whistles to snag mainstream gamers who aren't into the sport, it packs enough excitement to warrant long-term commitment by fishing fans.

It has not been a good week for Cid, the Siamese fighting fish that sits in front of my television. He has watched in horror while I've reeled in his brethren, screaming such trash-talking phrases as "Who's your daddy now!" and "Mmm, you'd look good with some tartar sauce."

The cause of Cid's angst is Championship Bass, a slightly flawed but convincingly realistic bass-angling simulation. Although the game fails to make a good first impression due to graphics and control glitches, its great features - such as lake exploration via boat, an underwater camera, and accurate fish behavior - make up for those flaws.

The game breaks down into four main modes: fishing trip, career, tournament, and challenge. Fishing trip is the equivalent of a practice mode, while the career and tournament modes pit you against unseen opponents in a timed race to catch the heaviest bass. The challenge mode offers a series of timed levels. You advance after completing the objectives in a given level, and beating certain levels or modes unlocks hidden lakes or lures.

While some games use prerendered backgrounds and fixed fishing locations, this game offers huge lakes that can be explored via a boat you pilot. While exploring, you have the option of toggling on an underwater camera to find fish. This camera works far better than conventional underwater sonar - and you will begin to appreciate its effectiveness while playing. These two unique features give the game an edge on some of its competitors.

However, at its root this game follows the timeless angling tradition: Pick bait and reel, cast bait, wait for bite, reel in, repeat until beer belly growls for dinner (beer belly optional). Fortunately, this game helps deaden the boredom somewhat. In addition to the free-exploration option (so you don't have to sit in one place forever), game time in most modes has been compressed - meaning five hours of game time is equivalent to an hour of real time. This gives the game a faster pace. More importantly, the fish act wholly realistic (based on my real-life fishing experiences) and require active attention.Perhaps I just need to get outside more, but I found myself getting sucked into the nuances of how finicky these fish were. Everything matters: type of bait, where the bait's dropped, and how the bait moves under the water. Attracting fish to a lure becomes a purely skill-based affair, dependent on how a player jiggles his bait to "charm" a fish into biting. The lack of templated behavior makes this game playable over the long haul. Also adding to the gameplay are "bad fish" such as bluegill and catfish, which generally steal bait reserved for bass - but anglers can hunt for them too if they choose. Furthermore, fish battle differently while being reeled in: Small fish take less than a minute, while huge fish take up to 10 to 15 minutes. A final plus: The game works with ASCII's fishing controller.

Still, this game has its share of flaws - there are a few serious control issues, but most are merely cosmetic. Some of the bait movements are either too subtle (when the buttons are used) or too strong (when the D-pad is used). It would be nice to initiate subtle twitchy bait movement with the D-pad, as you can in other games. Another odd control glitch: The boat often slows when too close to lake edges, even when such edges lie far from the boat.

Most of the other flaws fall in the graphics and sound departments. The underwater camera sometimes shows fish flickering in and out of view. When bait's in the water, the camera zooms in too close, so nearby fish can't be located easily, and bait depth becomes hard to measure. When you're in the boat, the background graphics bob up and down with the water, which looks rather unrealistic. Finally, the water reflections are a bit overdone: It looks more as if your boat is on mirrors rather than water. Finally, while the sound effects are passable, you have to deal with the worst two genres of video game music ever: early '80s metal guitar riffs when you're reeling fish in and a slew of bluegrass guitar ballads that only folks named Cleetus or Jeb could appreciate. Fortunately, there's an option to shut off the music.

Still, the gameplay features outweigh Championship Bass' flaws. Although it lacks enough bells and whistles to snag mainstream gamers who aren't into the sport, it packs enough excitement to warrant long-term commitment by fishing fans. If Electronic Arts had fixed the game's graphics glitches, fine-tuned its control responsiveness, and removed its awful country "twang" music, it would have jumped from merely decent to excellent in a heartbeat. Regardless of the flaws, only fishy folks like Cid will have reason to complain. 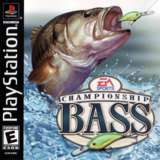 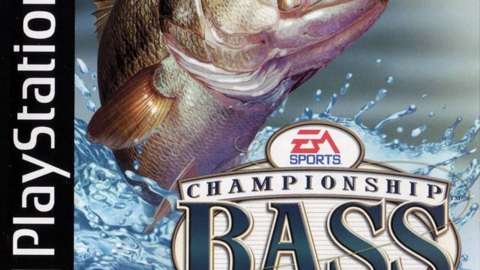 Although it lacks enough bells and whistles to snag mainstream gamers who aren't into the sport, it packs enough excitement to warrant long-term commitment by fishing fans.