Castlevania's switch from 2D side-scrolling to 3D fighting is an endless stream of missteps that will frustrate even series devotees.

To its credit, Castlevania Judgment has high ambitions. Rather than cloning a classic one-vs.one brawler and shoehorning Castlevania characters into it, Judgment fuses multiple fighting game philosophies in an effort to separate itself from its side-scrolling heritage. Unfortunately, it takes the borrowed ideas two steps back without pushing them forward. What you're left with is a mishmash of dull gameplay made up of disparate bits and pieces of various games, strung together with tragically applied motion-controlled attacks. The poor execution on such a high-potential premise will frustrate you from your very first fight until the moment you throw in the towel.

Judgment's influences are obvious from the start. Uniting weapons-based combat and big-chested babes reaks of Soul Calibur, while the gameplay is reminiscent of Power Stone at times. Even the menus and prefight banter between armor-clad characters feel familiar. But because it ditches deep combos, strategic fighting, and a balanced cast of characters, Judgment isn't the solid fighter it could have been. Once you and your opponent put up your dukes, you're free to roam around the 3D arenas and scour for ranged weapon pickups stashed in breakable boxes. Using throwing knives, hungry bats, and other Castlevania-themed goodies isn't very useful, though. Simply flicking the analog stick lets you easily evade the ranged attacks, which don't deal significant damage to begin with. If you opt to avoid using them, however, the A button loses its functionality. This is particularly onerous when you consider that mapping an attack to the A button could have decreased the amount of spastic waggling you'll have to endure.

Your gestures don't really resemble the onscreen action, and the painfully unresponsive controls involve a lot of wildly waggling your Wii Remote. Regardless of which direction you swing your controller in or how quickly you swing it, your character's combo never changes from the standard set of sword swings and whip lashes, so there's very little in the way of dynamic combat. The tutorial even goes so far as to point out that there's only one set of attacks for each character, so fights are rarely exciting. Alternatively, you can plug in your Gamecube or Classic controller to alleviate the woes of the clunky gesture-based combat in exchange for equally awkward button mashing.Regardless of which controller you use, you'll still be stuck with bland brawling. The only variety stems from tapping the A or B button to modify your standard combo, dealing more damage at the cost of vulnerability. This risk-vs.-reward choice is the sole technical aspect of the game. Fights otherwise boil down to one-round bouts wherein the better character--not player--wins the match. Judgment ditches the traditional concept of pitting balanced brawlers against each other in favor of overpowering fan favorites like Alucard, Maria Renard, and Simon Belmont. Meanwhile, third-rate characters like Eric Lecarde, Cornell, and the Golem are cripplingly weak and easily disposed of by the faster and stronger collective of famous faces.

New fighters are unlocked by completing each of the thinly laid-out storylines, but your efforts feel wasted since each awarded brawler feels weaker and slower than the last. If you decide to play through everyone's campaign, you'll find yourself struggling with these underpowered wimps who continually lose to superior enemies. This is annoying if you want to open up the entire roster, which takes more than 12 career completions. To make matters worse, the storytelling is downright maddening. Nothing hurts more than seeing your favorite characters reduced from menacing vampire hunters to a pack of blithering idiots. For example, an immature obsession with gigantic breasts sparks a number of Maria's jealousy-fueled fights. Each character has a quirk, but it's never interesting or suitable.

But even poor characters and story take a backseat to Judgment's insufferable camera. Instead of remaining stationary while the one-on-one fight plays out, it zooms out as you approach the front of the screen and tunnels inward as you retreat. Complicating things further are item caches and opponents that obscure the already problematic perspective, so it's nearly impossible to keep tabs on the action. As if things couldn't get any worse, each arena is riddled with bothersome traps that interrupt the flow of the fast-paced fights: poison pits, lava lakes, laser beams, springing spikes, kraken tentacles, and oscillating axes don't benefit the battleground in any capacity. More often they're the cause of reproducible glitches wherein AI fighters remain frozen in the trap until their health depletes to zero. The added clutter keeps you on your toes, but it takes away from the admirable detail of each arena. The breakable stained-glass windows of a church, rotting trees in a dying forest, and the lavish layout of Dracula's regal palace outshine the disappointing characters. The whole cast sports horrible costume redesigns featuring plenty of belts, chains and pointy armor that make characters like Simon, Sypha, Eric and Maria wholly unrecognizable. On top of that, the poorly rendered anime-influenced art suffers from jagged edges and crummy, single-color textures. They look out of place among the pretty, more realistic environments.

If you're just looking to fight, Judgment is full of game modes. On top of the expected Story mode and local multiplayer, online fighting adds longevity for anyone determined enough to stick out the frustrations of finding an opponent. Sadly, the community is totally barren as of this writing. Survival mode proves to be too repetitive with its fight-until-you-die mentality, and Arcade mode is just a series of battles with a time ticker. So the Castle mode is left to carry the weight. Similar to Soul Calibur II's Conquest game variant, you'll fend off hordes of minor enemies like monsters and zombies (as well as the occasional giant boss character) in a series of challenges as you unlock new gear to equip. It's addictive to earn goofy items like top hats and sunglasses, since the approach is so dissimilar to that of the two-man bouts, and a tolerable new camera angle makes for fun God of War-like arena battles.

Unfortunately, one worthwhile mode and new equipment can't save Castlevania Judgment from its mountainous pile of problems. The unforgivable flaws drain nearly every ounce of enjoyment from the fighter, and whatever aspiration it had falls flat on its face. The abhorrent camera, dreadful art, and cumbersome controls are for masochistic applicants only; fans of the franchise, fighting, or fun will find nothing of value in this sloppy cash-in. 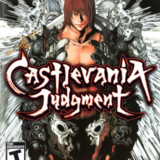 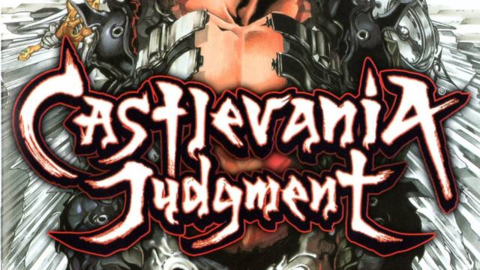 Castlevania Judgment is the first Castlevania title in the fighting game genre.