Castlevania: Circle of the Moon Review

Anyone craving an amazing 2D adventure--not just Symphony of the Night fans--would be absolutely foolish to pass on this one.

Konami's popular vampire-hunting series Castlevania has its roots in side-scrolling arcade-style platform games for the NES. While the early chapters in the series occasionally toyed with nonlinear gameplay, it wasn't until Castlevania: Symphony of the Night was released for the PlayStation that Konami really found a way to expand the series beyond a collection of relatively simple action games. SOTN merged the Castlevania concepts with a nonlinear world that was reminiscent of that of the classic NES game Metroid. The resulting game was a smash hit, and it still stands as one of the best 2D side-scrolling adventure games ever created. Circle of the Moon, one of Konami's first Game Boy Advance releases, sticks fairly close to the Symphony formula while adding a small collection element that adds more replay value into the equation.

The game takes place in an Austrian castle in the year 1830. Camilla has successfully resurrected Count Dracula yet again, and it's up to Nathan Graves and the father and son team of Morris and Hugh Baldwin to stop the evil vampire. However, Morris is captured almost immediately, and Nathan and Hugh are tossed aside and left for dead. Hugh departs in search of his father, leaving you to play as Nathan in your quest to defeat Dracula and save Morris. Like any good Castlevania protagonist, Nathan comes equipped with a whip, and he can pick up and use the same classic secondary weapons from the rest of the series, such as a dagger, holy water, a time-stopping watch, and an ax. The secondary weapons are powered by hearts, which are usually hidden in candles that must be whipped. At first, Nathan's movement and attack options are fairly limited, but as you progress through the game, you'll find additional items that let you do things like run, execute a dash attack, double jump, triangle jump off walls, breathe underwater, and bolt high into the sky. The game also has a magic system called DSS. The DSS, or dual setup system, is powered by cards. Different cards are found in different areas of the game, and their appearance is semi-random. Magic enhancements are selected by choosing one of each of the two types of cards. Action cards specify what sort of magic you'll use, while attribute cards alter the action by adding an effect, usually elemental in nature, to the spell. For instance, one spell may cause blue fiery spheres to rotate around you, while changing the attribute card will change the spell so that you're surrounded by a cloud of plant spores. This is also useful for different weapons, such as fire or ice swords. Not everything is a strictly offensive or defensive spell, however. Other combinations allow you to heal yourself, run at double speed, or even increase your luck attribute, making it easier to get items. The game also keeps track of strength, defense, and intelligence attributes. As you pick up items, such as armor and rings, you can equip them to raise your different stats. You'll also earn experience and gain levels as you play, which is another way to increase your health and magic maximums and your other attributes.

The game controls just as a Castlevania game should. You attack and jump with the two face buttons. Holding up while hitting attack uses your current secondary weapon. The L trigger turns your currently selected DSS combo on and off, and the R trigger is used for dash attacks, triangle jumps, and most of the game's other special moves. Some of the spells require you to do a fighting game-like swirl (from down to up) to activate them. Circle of the Moon's castle is rather large, and like Symphony of the Night, it is broken up into different sections. You will eventually uncover teleport rooms that quickly move you from one portion of the castle to another, as well as save rooms that fully recharge you and allow you to save your progress. While the game is pretty much nonlinear, you eventually get to a point where there's only one way to go, which leads to a boss fight. Beating that boss nets you an item that lets you go someplace that was previously inaccessible, and the sequence repeats. The castle is chock-full of hidden items that increase your life, your magic, or the maximum number of hearts you can hold at once. While the castle is quite large, experienced platform players should be able to get to the game's final encounter within eight hours of gameplay. Be warned, though--the game's final encounter is no joke. Completing the game unlocks different character variants that behave the same as the original character but have different starting stats and items. For instance, the magician-type character starts with all the game's cards and has good magic abilities, but he starts out with a lowered strength rating.

Graphically, Circle of the Moon looks very nice. The backgrounds are all impressive, and while the game is a little too dark for the GBA's already dim screen, it has a crisp look to it. The only thing that holds the graphics back is a lack of animation--your character looks a little jerky when moving, particularly when running. The enemies aren't exactly fountains of animation, either. The soundtrack is full of great songs that emulate songs from earlier Castlevania games, but they also stand up just fine on their own. Additionally, the game's sound effects are very well done. 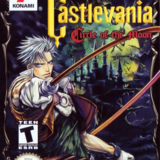 Castlevania: Circle of the Moon
Follow
$21.95 on Walmart
Buy 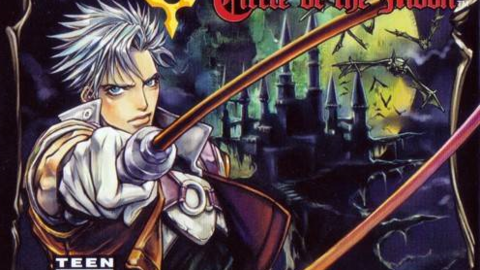 Castlevania: Circle of the Moon

Anyone craving an amazing 2D adventure--not just Symphony of the Night fans--would be absolutely foolish to pass on this one.

8.9
Sign In to rate Castlevania: Circle of the Moon