A Pixar film license finally gets some due justice in this quirky and enjoyable driving game.

Alongside Cars, the newest addition to the ever-growing and consistently high-quality lexicon of Pixar animated films, comes the predictable video game tie-in. But there's something altogether unfamiliar about this version of Cars, something unexpected from the perspective of anyone who's ever played a lackluster Pixar-licensed movie game before. You see, Cars isn't just a middling cash-in on the license. It's a legitimately fun piece of work that combines driving game components with an open-ended gameworld and a host of goofy minigames that aren't broken, tacked-on, or otherwise unpleasant. It also manages to capture the heart and humor of the film pretty well, thanks in no small part to the great character animation and use of the entire celebrity voice cast from the movie. Certainly there are a few aspects of Cars that feel hurried for the sake of getting the game on store shelves in tune with the film release, but Cars transcends these few nagging issues with its charm and character, and it manages to be a good bit of fun to play, too.

Leave it to Pixar to take big hunks of combustion-powered metal and rubber and turn them into endearing characters. Just in case you haven't seen the movie, Cars is about a world of, well, cars. These are cars with faces, unique personalities, and no human drivers to get in the way. The story focuses around an up-and-comer in stock car racing named Lightning McQueen. Lightning is the next big thing in racing, but when he inadvertently wreaks havoc in the sleepy burg of Radiator Springs on his way to his next race, Lightning finds himself stuck with these country bumpkins, learning inevitable lessons of life and love. You don't necessarily need to know any of this going into the video game version of Cars, but it helps to have seen the movie first, since Cars the game actually takes place after the movie's plotline. The vast majority of the principal characters from the movie, as well as their associated voice actors, are on hand here for an entirely original tale that sees Lightning working his way through the new racing season against his rival, Chick Hicks (voiced to twitchy perfection by Michael Keaton). It's a cute story that's got a good bit of humor, and anybody who liked the movie ought to be able to get into it easily.

As far as how Cars plays, imagine Grand Theft Auto if you never got out of the car (or, at least something along those lines). Radiator Springs isn't a particularly huge area, but spread across it are multiple locales that you, as Lightning McQueen, can drive to in order to acquire missions. You typically only have a few missions available to you at a time, and some missions are only unlockable after you complete an entire story chapter's worth of missions, but generally you can just kind of drive about the area with freedom, collecting bonus points and other hidden items as you go.

For the most part, Cars' missions revolve around racing. These are cars, after all. The racing itself is largely pretty simplistic. There are some powersliding and boosting mechanics included, as well as a few goofy moves like making the car jump at will, and even driving backwards for point bonuses. The handling of the cars is pretty easy to get a handle on, though powersliding isn't always as effective as you might expect it to be. But you only use stuff like powersliding and boosting in the off-road races in Radiator Springs. When you're competing in the professional races, it's like a NASCAR cartoon. You drive to the left, occasionally bump up against other racers, and occasionally have to make a pit stop.

The pit stops are just one of several minigames contained within the game. Most minigames are missions unto themselves, where you'll be collecting tires as Guido, the local tire mechanic, for example, or "tractor tipping" around a local farm as Larry the Cable Guy-voiced Mater. Pit stops are the only in-race minigames to speak of, and they simply involve timed button-presses and analog stick movements at random intervals to make your pit crew work as fast as possible. For the most part, these games are actually pretty fun. The pit stop game is rather pointless, though, in that you arbitrarily have to do it once every race, and the only benefit for doing it quickly is that you don't lose any race position. But the mission-based games are pretty amusing and tie in to the flow of the game nicely.

One particularly ingenious thing that Cars does is that it actually splits itself into two games. One is designed for players of "all ages," and the other is a shorter, easier version for younger kids. Obviously plenty of games have multiple difficulty levels, but most games of this ilk just play it safe and dumb the experience down for the kids. That's not to say Cars isn't completely absolved of this crime, mind you. Even in the general audience version, the game is still fairly simple. Until the last stages of the game, it's pretty hard to lose races, especially since the opponent artificial intelligence rubber bands quite a bit in favor of the player. Get behind by a significant margin, and you'll actually see cars ahead of you slow down sometimes, giving you the boost you need. The later races are certainly more challenging, but a more even balance of difficulty would have helped the gameplay quite a bit. For what it's worth, the difference between the two versions is still pretty noticeable.

Cars also suffers a bit due to a few glitches and technical issues. It's all relatively minor stuff that just happens to become a bit infuriating in some areas. Most of the problems have to do with graphical bugs and physics issues. The game's environments are often set up with borders and sections you're not supposed to be able to traverse, but some of these borders are spotty with their barriers, and you can get stuck in certain pieces of the environment if you run into them the wrong way. The car physics also get wonky in some spots. Fall sideways off of a ledge, and you may find yourself driving on your left tires for a while until the game figures out a way to reset your car back to normal. You'll also see some occasional issues with cars clipping through one another.

These issues aside, however, Cars is a nice-looking game. The character models are great interpretations of the characters from the movie, and the quality of animation, especially in cutscenes, is excellent. The cars are extremely expressive with their facial animations, and the lip-syncing is more spot-on than most games starring humans. The one downside to this is that while you're driving, you are typically relegated to the usual 3rd-person camera, so in effect, all you get is the butt cam. But there are more than enough cutscenes to make it so all that great character animation isn't wasted. Radiator Springs itself is also rather pleasing to look at. Most of the area is made up of desert, but the few scattered bits of the township, as well as some of the mountain environments and areas, look great. You'll certainly see some dirty textures here and there, but usually you're moving so fast that it doesn't even matter. Between the Xbox, PlayStation 2 and GameCube versions of the game, you're not really missing out on anything no matter which way you go. The Xbox version looks the best, but not by a wide margin.

Obviously, one of the biggest selling points of Cars is the inclusion of the movie's voice cast. Owen Wilson, Bonnie Hunt, Tony Shaloub, Michael Keaton, Larry the Cable Guy (in a decidedly "Git 'er done!"-free performance), George Carlin, Darrell Waltrip, Richard Petty, Cheech Marin, and Paul Newman are all on hand. Yeah, Paul Newman in a video game. Kind of insane, no? All the actors are pretty much on point throughout the game. Wilson is just as endearing in the game as he was in the film, and pretty much every actor seems to be treating their game dialogue as importantly as the movie stuff. There's also a pretty good licensed soundtrack on hand with tracks from the Stray Cats, Lynryd Skynryd, the Edgar Winter Group, and the All American Rejects, among others. The only thing really worth complaining about in the audio department is the repetition of the aforementioned aspects. One-liners from the characters during races tend to repeat too often, as do most of the soundtrack songs. Again, it's all great stuff, so it makes the repetitious nature of it a little easier to swallow. It would just be nice if there were more variety.

Though Cars will almost certainly take you well under 10 hours to complete, there's two-player multiplayer to mess with, as well as some bonus materials to check out. Not to mention that the quality of Cars' content is enough to make up for its relatively short stature. It's hardly the next big thing in driving games, but it still manages to deliver the most authentic Pixar film experience to the video game medium of any previous attempt, and it's certainly one of the better kid-oriented games to come out this year. 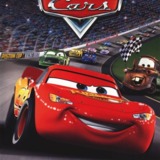 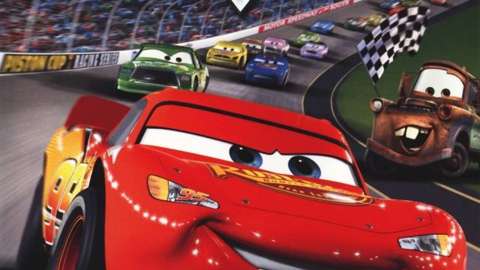 Based on the PIXAR film of the same name, Cars has you playing as characters from the movie as you help Lightning McQueen capture the coveted Piston Cup Championship.