While it offers an interesting and varied campaign, Big Red One doesn't quite nail down the intense feel of World War II infantry combat.

Though Call of Duty 2: Big Red One shares its name with another game released on the PC--and soon to be released on the Xbox 360--you shouldn't confuse the two. Big Red One for the Xbox, PlayStation 2, and GameCube is an entirely different game from the PC and Xbox 360 versions. While it's a definite improvement on Activision's last Call of Duty game for consoles, Big Red One still doesn't do quite enough to distinguish itself from numerous other World War II first-person shooters.

The subtitle, Big Red One, refers to the United States' Army's 1st Infantry Division, whose exploits are chronicled in the game's 13-mission campaign. The unit became known as one of America's fiercest and most courageous fighting units in World War II, serving tours of duty in North Africa, sweeping up through Italy, landing on Normandy, and pushing across the European continent into Germany. Big Red One's campaign follows this chronological path, putting you in the shoes of a fresh-faced private in Fox company. Over the course of the campaign, you'll participate in a number of different missions, such as capturing airfields, clearing out villages, and assisting other units in battle.

The game mixes things up a lot, having you at various times driving tanks, manning the mounted guns of marine landing craft, shooting down aircraft from antiaircraft guns, and even operating the turret guns and bomb bay doors of a B-24 Liberator. You'll also use binoculars to help spot for artillery or navy ships so you can rain the hurt down on tanks and other hard targets. Yes, the pathways are linear and scripted, as in all the other Call of Duty games, but the variation in the mission types helps keep the game fresh and interesting, instead of just having you on foot shooting guys with a rifle the whole time. The fun doesn't last long, however, as most people should be able to blow through the campaign in seven or eight hours.

Despite the brevity of the single-player campaign, Big Red One seems to have all the elements of a great shooter. It's got varied mission types that take you across several different settings, from the deserts of North Africa, to house-to-house fighting in the deep snows of Germany in early 1945. You'll use weapons from a wide variety of different national arsenals--including American, of course, German, Italian, and even French ones (as you fight against Vichy France's forces in North Africa). The game even manages to remind you of the grander scale of the war from time to time, as you'll see numerous other craft making the marine landings with you at Sicily and Normandy, in addition to dogfighting aircraft in the sky and other infantry running about. Where Big Red One seems to let you down is just in the basic nuts and bolts of the feel and interface. For one thing, the weapon handling just seems off. It's possible, for example, to snipe from long distance with submachine guns, as the first bullet is always dead-on. If not for the fact that rifles have slightly more power, there would really be no reason to use them because of how abnormally accurate the submachine guns are. More importantly, though, is that the game just seems to lack the visceral intensity that made Call of Duty so popular on the PC.

A lot of that could stem from the fact that the sound effects in Big Red One aren't all that special. You don't get a real sense of power from any of the handheld weapons you fire, whether it's a BAR assault rifle, a Thompson, or even an MP44 Sturmgewehr that you pick up off a German soldier later in the game. Aside from mounted machine guns or tank cannons, none of the weapons in the game feels or sounds particularly fearsome. The enemies also act oddly feathery and light when you shoot them. Bodies don't seem to fall with any real sense of weight, which is most obvious when you hit them with a grenade or other explosive weapon. It's a very subtle thing, and it's maybe not one you'll notice if you don't play a whole lot of shooters, but the look and feel of infantry combat in Big Red One just doesn't feel all that intense.

The lack of intensity is exacerbated by the artificial intelligence in the game, which is rather unremarkable on both sides. There will be times when you're clearing out houses or bunkers when you'll watch your squadmates, who are standing fewer than six feet from the enemy, fire and miss badly...all while the enemy also manages to miss. These John Woo-esque Mexican standoffs can seem to go on for way too long, unless you go ahead and end them yourself. Vehicles and mounted weapons, on the other hand, mostly look and sound good, particularly when you hear Stukas doing their signature death wail on dive attacks or when you fire a tank cannon on a Stuart or Sherman. Planes come apart in a variety of ways, while vehicles can also die in spectacularly fiery and smoky explosions. Despite all that, Big Red One has its moments, and the game certainly gets more interesting and fun the farther along you get in the campaign. It's too bad it all seems to end too quickly.

Once you're done with the single-player, the PlayStation 2 and Xbox versions of the game offer 16-player online multiplayer. A few standard game types are available, including deathmatch, team deathmatch, capture the flag, and domination, the latter of which involves capturing and holding specific points on the map. None of the versions, unfortunately, offers any split-screen support which means that GameCube owners are left with no multiplayer options at all. Meanwhile, the Xbox and PS2 versions don't seem to offer any sort of stat-tracking for their online multiplayer modes. There are 11 different maps available, but most of them seem to be derived from the single-player campaign maps. The gameplay was pretty smooth and playable on both platforms, but the actual experience still left a lot to be desired because of the weak infantry combat. You can drive tanks around in several of the maps but when you're on foot and shooting at other infantry, you're not given any feedback on whether or not you're hitting your target. Even the maps that do have tanks in them don't seem to get much out of having them there, as many of them are cityscapes with narrow streets that offer little ability for the tanks to maneuver. While they're powerful, tanks easily fall prey to infantry hiding inside of buildings with anti-tank weapons because of the lack of space.

While Big Red One doesn't do much to distinguish itself with sound effects or music, the game still looks pretty good across all platforms. The vehicles and character models exhibit a good amount of detail, while the effects of explosions and smoke are also impressive. There's just something really satisfying about seeing a tank spout fire from the hatch after you nail it with a panzerschreck, or seeing a Stuka's wing get sawed off by fire from your 20mm AA gun. It's also interesting that any nearby explosions not only shake your vision and cause a ringing in your ears, but also immediately throw you to the ground (like going prone) so that you need to stand up. There aren't any cutscenes, but the beginning and end of each chapter offers some in-game movie sequences that involve some genial banter between you and your squadmates. It's a little hackneyed if you've seen any recent WWII movie or miniseries. You've got your cool, no-nonsense squad leader, a clown, and the-guy-with-a-Bronx-accent. You never get too attached to anyone, but the scenes at least give some context to everything.

Overall, Call of Duty 2: Big Red One is still a worthwhile first-person shooter. The game has made noticeable strides over the previous Call of Duty game on consoles with an interesting, but short, campaign. While the game has its moments, particularly with the turret shooting and vehicle portions, Big Red One still falls short of the standard the series set for itself on the PC because of pedestrian sound effects, poor AI, and a lack of intensity in the infantry combat. The multiplayer action on the Xbox and PS2 is also only serviceable, so it's worth a bullet point on the back of the box...and not much more. Unless you're a hardcore WWII game fanatic, Big Red One's probably only worth a rent.

Editor's note 11/08/05: Our original review incorrectly stated that vehicles were unavailable in the online portions of the multiplayer-enabled versions of the game. GameSpot regrets the error. 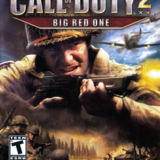