Back on the case.

Editor's note: Almost five years after its PC debut, Broken Sword 5: The Serpent's Curse has come to the Nintendo Switch, bringing its challenging variety of point-and-click adventure puzzles and complex but compelling narrative to the portable system. With it comes some elegant touch screen controls that make poking around the beautifully drawn and detailed environments feel more natural, though you can jump back to using the Joy-Con at any time, switching between the two methods without opening a menu.

As you progress through the familiar but still fascinating story you'll also unlock Switch-exclusive bonus movies from a making-of documentary about the game's development, including some great looking concept art. Even now, Broken Sword 5 still looks gorgeous, and although its murder-turned-conspiracy story feels somewhat rote these days, its characters and dialogue are still great fun to watch as the drama unfolds. The pick-up-and-put-down nature of a point-and-click adventure works especially well on Switch, and the excellent use of touch screen controls enhances the experience even more. -- James Swinbanks, 9/20/18 [We have updated the score to reflect our experience with the Nintendo Switch version. The original review follows below.]

A murdered art gallery owner, a helmeted assassin, and a missing painting. It's just another beautiful day in Paris, and for George Stobbart and Nico Collard, a brand-new case to be solved. After a seven-year hiatus and a successful Kickstarter campaign, the best-selling Broken Sword series has reemerged. Broken Sword 5: The Serpent's Curse ushers the return of the franchise's protagonists, along with a host of favorites.

It has been quite a while since George and Nico have joined up to solve a case, and in that stretch of time, the two seem to have pursued their own ventures: George has become an agent for an insurance company, and Nico is continuing her career as a globetrotting journalist. But a tragedy strikes, leaving a man murdered for a painting that was worth considerably less than others in the gallery. Since it was George's company that insured the showcase, he feels obligated to uncover the reason behind the theft and find out what makes this painting important enough to kill for. The crime-solving duo are soon reunited and thrust into a murderous conspiracy, armed only with George's astute problem-solving skills and Nico's feminine charm and sharp wit.

The story weaves a smart, fascinating, and often humorous tale. George and Nico's latest adventure is fraught with murder, sabotage, and a seedy love affair, with just enough room for an ex-Russian mobster and an assassin or two to be thrown into the mix. You switch between the two characters as they follow a trail that has them trekking through France and London chasing down leads. As you progress, the plot begins to revolve around an age-old conflict between Gnostic and Dominican Christians, and at its epicenter is the painting: La Malediccio. The painting hides more secrets than what can be seen on the surface, and may be the key to an impending epidemic that threatens all life.

Broken Sword 5 follows the series' roots as a point-and-click adventure; you use the mouse cursor to control movement as well as to manipulate objects in an area, speak with people, or use items in your inventory to solve a puzzle. Like in many games in the genre, you pick up items and bits of evidence and store them. You use evidence to drag the truth out of people or suspects, while other items, even the most miniscule, such as a paper clip, 1970s cologne, or nail clippers, can be used or combined to solve puzzles down the line.

The order in which you procure these items is up to you. At times, you may only have a few clues, leaving you to scour the environment for more evidence necessary to drag information out of your target. Typically, all the evidence required to move the plot along is in your vicinity, if not already on hand. Any and all items in your inventory can be used in a conversation, sometimes to humorous results.

The puzzles in Broken Sword 5 are not too strenuous. Most of the time you already have everything in your inventory needed to complete a puzzle; otherwise, a quick hunt around the area yields what you need. The game plays a musical note when you're making progress in a puzzle or in your interrogation, cluing you in on when you're on the right path. The plot doesn't advance until you find every item or piece of evidence in the area, press the right series of switches, or receive an answer to all questions available. But if you do find yourself stumped, there's an optional hint system. The first hint or two gently nudge you in the right direction. If you still come up empty, the final hint presents the puzzle's full solution.

The various settings are designed with colorful, hand-painted graphics, and the cel-shaded characters blend effortlessly into the gorgeous scenic backdrops. Though Broken Sword 5 is aesthetically pleasing, it's hard not to notice the stiff and somewhat primitive animations, which are distracting compared to the game's overall beauty. Broken Sword 5's rich and vibrant world is complemented by characters who are interesting, entertaining, and often hilarious. The subtle nuances of their personalities shine through every conversation, and a great vocal cast makes each character believable and memorable.

George and Nico's latest adventure is fraught with murder, sabotage, and a seedy love affair.

Some of the standout characters include the returning Sergeant Moue, who plays lapdog to the bumbling Inspector Navet. There is also a stereotypically snooty Frenchman who stands guard at an empty cafe while quoting philosophical advice. Also starring are a lecherous art critic and a young man who needs presentation advice for his mobile shop of trinkets and collectibles. The many varied and unique characters reinforce the depth of the game's narrative, and the two protagonists demonstrate a particular chemistry that makes their longtime history feel convincing.

You are provided with an in-game map, but Broken Sword 5 keeps aimless wandering down to a minimum. There was never a moment when I stared at the map screen not knowing my next destination. Even when you choose the wrong direction, the game comes up with a reason for you to turn back and try the opposite route. Some adventure game fans may be turned off by the linear focus, but I felt the design allowed the narrative to move with a strong pace and clear direction.

Just how deep the rabbit hole goes is the one mystery Broken Sword 5 doesn't shed light on. After about six hours, the game abruptly ends just as things start heating up for our stalwart heroes, leaving more lingering questions and theories than hard answers. The game is the first episode of a two-part adventure, meaning we won't get to the bottom of the conspiracy until sometime early next year.

Smart, occasionally funny, and immediately charming, Broken Sword 5: The Serpent's Curse is easy to recommend based on its strong narrative, memorable characters, and artistic merit. The game is a vibrant return to form for the series, and should easily please the series' and point-and-click adventure game fans alike. The answers to the most pivotal questions remain on the horizon, but it's still good to see George and Nico back in action--they have been missed. 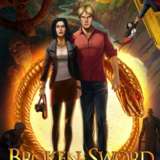 Cameron Woolsey has clicked his way through many adventures starring cartoon dogs, rabbits, and a talking skeleton. For the purpose of this review, Cameron played the game from start to finish. 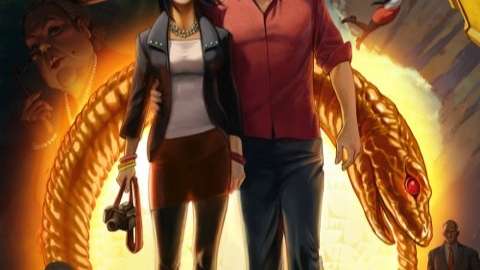 George Stobbart and Nico Collard reunite for a new adventure in Broken Sword: The Serpent's Curse.

7.3
Sign In to rate Broken Sword 5: The Serpent's Curse