Subtitle or not, this ain't the second coming of Jagged Alliance.

Don't be fooled by a subtitle. Although you've got to admire the chutzpah of developer Apeiron and publisher Strategy First for attempting to fake out fans with the name of Brigade E5: New Jagged Union, this turn-based tactical simulation has nothing in common with the late, great Jagged Alliance series besides a premise about mercenaries in the tropics. Third-rate mission design, prehistoric visuals, and problematic pathfinding mean that you won't enjoy playing soldier of fortune here, even if the developers have added a bit of life to the squad-sim genre with a few design innovations.

The first thing you'll wonder is if Brigade has been in development since Jagged Alliance 2 hit store shelves back in 1999--because it sure looks like it. This is one of the ugliest games to grace a monitor in some time. It doesn't quite devolve all the way back to the big 2D sprites featured in the Jagged Alliance games, but it's as close as you could possibly come with a somewhat modern 3D engine. All of the jungle settings in the fictional nation of Palinero, which serves as the game's setting, are dark and dreary. You're supposed to be a gun for hire in a tropical paradise, but the smeared dark green and brown color palette is a long way from the lush palm-tree hues you go in expecting.

Actually, the palm trees here are made up of polyhedrons. Buildings are little more than crude, mostly unfurnished boxes. Maps end abruptly in bright blue walls, so it looks as if you're soldiering on a movie set. Characters are alternately blurry and pixelated, and one of the main mercs looks too much like a young Stalin for the resemblance to be a coincidence. Unrealistic animations include dead characters either slowly settling to the ground as if they were tucking themselves in for a nap, or going immediately from upright to prone.

Audio features the same annoying heavy metal music that seems to be in every second-rate Eastern European game these days, along with horribly butchered dialogue. The English language gets manhandled more than the corrupt goons who run Palinero. Dialogue often makes no sense and includes unintentionally hilarious translations as funny as anything Nintendo inflicted on the English-speaking world in the old NES days. You constantly hear mercs proudly saying that dead enemies have been "neutered," which is either a mistake or proof that these Russians really don't mess around. Also, all of the characters speak in phony-sounding Russian accents straight out of a B movie, which is a bit weird because developer Apeiron is actually based in Russia.

Given the look and feel of Brigade it shouldn't come as any surprise that the gameplay is also second-rate. But it's not quite as bad as it could be. The campaign is the standard stereotypical tale about fighting a corrupt military junta that will be familiar to those who remember their jaunts through Metavira and Arulco in the Jagged Alliance games. Difficulty is grueling, as seems typical for this genre, largely because you spend a lot of time operating solo at the start of the game. This makes for some really painful early missions in which you get gunned down many times before lucking your way through.

Also, the campaign doesn't feel nearly as realistic as the games it attempts to mimic. Mercs here have zero personality to go along with their combat stats, even though you start off in a job interview with a commanding officer who sets your stats based on your answers to questions (which are inane ones like how you prefer to impress girls). So you can't get emotionally attached to them. The feel is very "gamey." You can't talk to most NPCs (even though the cursor changes to a "talk" command when you hover it over them); there is a lot of helping people out just because, even though you're supposed to be a gun for hire; stores only carry weapons in line with the current stage of the game; and so forth. Multiplayer is present, but you might as well forget about ever taking advantage of the option, because the in-game server browser is never able to actually connect to a server.

Enhanced control over troops is provided by a few nifty movement innovations, though. It's generally easy to get around, so the "why the hell is he doing that?" frustration common to turn-based tactical games is minimized. A suite of commands based on holding down the Shift or Alt keys makes it a snap to move accurately and swiftly. The quick-cornering option, for instance, lets you immediately whip around corners and target enemies in range. It comes in really handy throughout the game and makes combat both more realistic and more enjoyable. Well, most of the time. Enemies can pull off this move, too, and they do it so fast that they seem to materialize out of nowhere, shoot you, and then immediately vanish back behind cover. That isn't quite so enjoyable.

But don't get too hopeful based on the above, because the game is clunky in most other respects. The hybrid real-time/turn-based Smart Pause Mode (SPM) movement system isn't all that intelligent; it pauses constantly, even in the midst of carrying out shooting commands. You can edit these pauses, but the game still halts for no apparent reason on a regular basis even with some of the more irritating ones turned off. Artificial intelligence is on the ball at times, and will even smartly send enemies to flank you around buildings on occasion. But much of the time they either duck for the nearest cover and stay there, only peeking out to shoot at you, or simply stand their ground and blast away. Enemies can shoot you through doors on occasion, too, and at other times walk partially through them.

By any way to measure it, Brigade is a bad game. Aperion came up with a novel idea with its innovative movement mechanic, but everything else about the game is so ugly, busted, or otherwise unpleasant that it all but negates that one positive point. 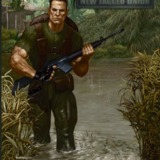 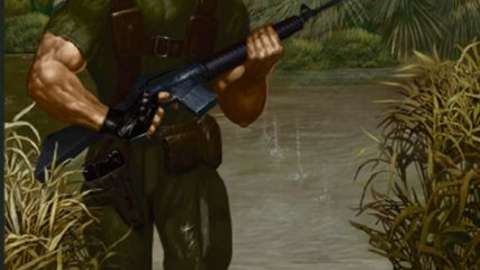 This tactical strategy game is set in a small tropical country on the brink of a civil war.