A moving story, serene visuals, and brilliant puzzles make Braid an adventure that you absolutely should experience.

Last year, Xbox 360 owners were treated to one of the most unique and beautiful puzzle games ever crafted. Braid infused clever time mechanics into a traditional 2D platformer, paving the way for a memorable journey in which every obstacle required careful planning to overcome and every success was met with unbridled satisfaction. More than a year has passed since Braid was first released, but it has not dampened the enjoyment found in this special game one bit. The PlayStation 3 version is a mirror image of the original--there are no new levels and the price is the same. But the contemplative gameplay, stirring soundtrack, and serene visuals have stood the test of time, making this experience every bit as fantastic as it was last year.

Braid is the rare game that will make you rack your brain trying to solve puzzles one minute while challenging you to come to terms with its mature tale the next. The plot is succinctly summarized before you enter the first world: Tim, the hero, has made a mistake that cost him his love; now, he has to rescue his lost princess from an evil monster. The story, told through books before each of the six worlds, chronicles Tim's ruminations on the subjects eating away at him. These could be labeled poetic or sappy--depending on your level of cynicism--but they add powerful context to the running and jumping action that follows.

Tim's thoughts often drift toward changing the past, which ties in nicely with the time-shifting mechanics you'll be employing throughout the entire adventure. Your standard ability allows you to rewind time with the push of a button. The most basic use of this is simply pushing back time to avoid being killed by an enemy or reattempting a mistimed jump, but it goes much deeper than replaying failed opportunities. Every world has a unique slant on time manipulation, but one intriguing mechanic crops up throughout the game. There are green objects and enemies in the world that are unaffected by your time changing powers. So if you unlock a green door and rewind time, it will remain open, even though your character will move back in time. Your ability to control time is used in many unexpected and often brilliant ways, making you use parts of your brain that are rarely tapped during most puzzle games.

Later levels retain these basic mechanics but add unique twists that ensure every world feels completely different. Which time manipulation tool you are given depends on what world you're currently exploring. In the fourth world, you control time simply by walking. Every step forward pushes objects and enemies forward in time, while moving backward takes them into the past with you. Because these levels have enemies and items that move in direct relation to you, they have been meticulously constructed to make navigation possible. In another world, you make a copy of yourself every time you rewind time. Your shadow can jump on enemy heads, pull switches, and unlock doors; you just have to perform the action yourself first. The different solutions built around these powers vary widely, so you have to figure out the extent of your powers before you happen upon the always logical solution. Though the puzzles are formidable, Braid never frustrates.

Each of the first five worlds in Braid has 12 different puzzle pieces to collect. The levels are actually extremely short, so if you wanted, you could run through most of the game in little more than 15 minutes, but you'll have to collect all 60 of the deviously placed pieces if you want to see the poignant conclusion. The entire game should take more than six hours to finish, depending on your puzzle-solving acumen. It may seem unfair to ask you to collect every little piece to see the thrilling ending, but by encouraging you to tackle the most challenging puzzles, the game is ultimately much more rewarding than it would have been otherwise. Though the game only forces you to backtrack during one very early puzzle, it's unlikely that you'll be able to nab every piece the first time you play through the worlds. It is only after mastering your abilities and learning your limitations that you'll be able to conquer the puzzles that seemed impossible your first time through.

Most of the puzzles in Braid emphasize clever thinking over quick reflexes. The actions you're required to pull off should be second nature if you've ever jumped on goomba heads in the past. Braid certainly realizes that its running and jumping encounters feel an awful lot like Super Mario Bros.--there are clever references to the venerable plumber throughout the game. From the dangerous plants coming out of pipes to the flag pole that greets you at the end of every world, there are constant reminders of Braid's progenitor. Like the musings from Tim's books before each level, these homages tie into the overarching story of the wounded hero's subconscious longings.

The subtle visuals are eye-catching but never distracting. The world looks like it was composed with pastel watercolors, swirling blends that create a very distinct look. The characters themselves--Tim, his enemies, and the princess--stand out prominently against the serene, multilayered backdrop. They're like flat, cardboard cutouts colored by markers. The score is elegant and mild--quiet songs that mirror the deliberate pacing. The music bends with the time, racing forward and backward along with your actions. Braid's presentation is uniformly impressive, and serves to complement the gameplay rather than draw focus away it.

Braid can be finished in just a few hours, which might make the $15 price tag seem a bit high. But do not let a few extra dollars deter you from an exemplary experience that can rival many full-price, retail games. Braid is worth every penny. The captivating ending sequence, which makes use of your rewind ability in a jaw-dropping new way, provides the exclamation point on this remarkable game, but the adventure is consistently engaging throughout the entire ride. The clever puzzles alone are enough to make this an adventure worth taking. Braid's deep and mesmerizing tale is evergreen: it is outside of and beyond time. It will never get old. 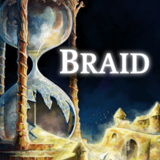 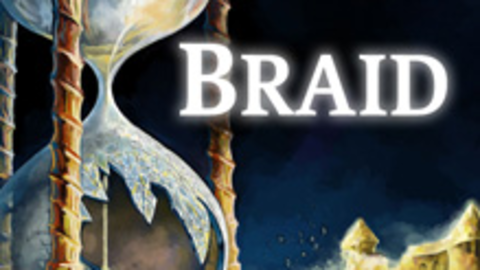 Travel seven platforming worlds to save a princess, but be wary of the peculiar flow of time in each level.