It comes as no surprise that the $10 you would spend on purchasing this game would be better spent on several games at a real bowling alley.

Recently, the Sony PlayStation has been the host of a growing library of titles that fall into the "budget" category, or games that retail for $9.99 new. For the most part, these have been simple games, lackluster in their execution and delivery. A1 Games' Bowling is no exception to this rule.

As you might expect, the standard features of a bowling game are present and accounted for: 10 pins, a freshly oiled lane, and a selection of balls of various weight. The only glaring exception is the well-worn shoes. After you've chosen your ball, it's time to get bowling. If you choose, you can also team up with up to three friends to fill up the lanes. The main mechanic of the game is fairly simple to get a grasp on: You simply align an arrow pointing down the lane, adjust the level of power with which you'd like to throw the ball, and finally, heave the ball down the lane after putting some spin on the ball. The latter of the three steps is the toughest to get the hang of, as there is a small target in the center of the screen that you have to aim for to make the ball roll straight. As you'll soon find after a few frames of gutter balls, a little bit of spin can go a long way. So much so in fact that the end result is completely and totally unrealistic. After all is said and done, this game strips bowling down to a bare minimum of options and lets you go from there.

Graphically, this game is about as plain as they come. The lanes, pins, and balls are all very simply rendered and are generally unattractive. To make matters worse, the only view that you see during the game is a bowler's eye view of the lane with a camera that follows the ball as it heads toward the pins. In short, you practically look at the same screen during the whole game. The in-game sound, for the most part, is also an annoyance. The sounds of the ball rolling down the lane and the resulting crash into the pins are similar in quality to a canned laughter track on a sitcom. As you can imagine, hearing the same repetitive audio for several games can get old rather quickly.

On top of the standard bowling game, there are two additional modes of play to add a small amount of fuel to the fire. The first of which is the special mode, which takes a standard game, increases the number of pins in the lane to 45, and shortens the number of frames to seven. The end result is basically the same as the standard game, just slightly different. The last of the additional modes is the quest mode. In the case of this variant, the lane has only three pins standing, and you are given several chances to knock the pins down. After doing so, you are given an additional ball, and you move on to another frame of three pins. As you can see, these additional games are really only slightly different from the main game and don't really offer that much to the player.

Bowling is a simple game with unimpressive visuals and monotonous gameplay. It comes as no surprise that the $10 you would spend on purchasing this game would be better spent on several games at a real bowling alley. 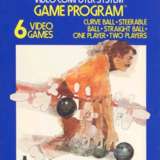