Though not without drawbacks, Bloodwake is an entertaining game that could be a good start to a new series.

In Bloodwake, you play as Lieutenant Shao Kai, a former naval officer who's thrown in with a band of sea raiders after being betrayed and left for dead by his brother. Since your brother, Admiral Shao Lung of the Northern League fleet, has been using a monstrous warship named the Dragon and a powerful magic amulet to ravage any forces that come across his path in an aggressive bid for power, it's only a matter of time before an opportunity for revenge presents itself. But you must work your way up the pirates' chain of command before you can get that chance.

Unlike other vehicular combat games, Bloodwake is mission-based, in the truest sense of the term. Instead of being dropped into an arena with several other opponents, the game gives you goals that you must carry out within its large, sprawling environments. Your objectives range from destroying an enemy outpost to escorting a fleet of merchant ships into safe waters, from racing through a gauntlet filled with gun emplacements and hostile boats to defending your main port while the fleet's away.

As you progress through the game's levels, you gain access to more powerful or faster boats. Boats vary in terms of size, speed, and special weapons, and since you can't choose your boat at the outset of the mission, you quickly learn each one's plusses and minuses. Each boat is equipped with a chain gun; a brief, constantly recharging turbo boost; and one or more special weapons, such as rockets, cannons, torpedoes, mines, and a kind of anti-mine/anti-torpedo phaser. You can only use these special weapons for a brief amount of time before they overheat, which keeps the game from having less of the "throw everything at them" aspect you see in the Twisted Metal series.

Bloodwake tells its story using between-level story segments that consist of animated sketches on parchment and some exceptional voice acting. This unique style, coupled with a sharp interface, is very polished and gives the game a distinct appearance. The game's environments also look excellent. The wave effects might not be as impressive as in some of the recent water-based racing games, but they roll and pitch almost with the best of them. One of the most notable water effects is the shimmering sea, which looks quite different at various times of the day. The midday sun makes the water appear bluer than the lighter morning light and the darker dusk light, and the moonlit sea looks incredible. The levels can be graphically sparse at times and lacks certain little touches seen in other games that could have served as icing on the cake, but the game does maintain a solid 30 frames per second frame rate, even when waves are crashing around you in the middle of a battle. Bloodwake's soundtrack is similarly strong, with songs focusing on power chords, traditional Asian drums, or a mixture of both.

The control in Bloodwake, however, can take some getting used to. Since you're piloting a boat in the water instead of a car, it can take a bit to start accelerating once you've stopped suddenly because of an explosion or a collision with another boat. Also, most boats turn slowly, and the game's controls often reverse if you cut too tightly, which can be frustrating if you're in combat or navigating a tight channel. You can overcome the acceleration problem over time as you earn faster boats or learn to save your turbo boosts for these times, but the turning is an issue throughout the game.

Like Twisted Metal: Black, Bloodwake can be a difficult game, even on its easiest setting. Luckily, you can choose the difficulty level at the beginning of each level, and you can go back at any time to retry a mission on a harder setting (which can open up extra options in the game's multiplayer mode). Since some of the levels require the completion of multiple goals over extended terrain, the difficulty level can be maddening, and the game's final level is absolutely grueling. (It's worth noting that one Xbox controller was destroyed during the review process of this game.) Most of the game's toughness is due to the fact that it takes quite a bit of time for your boat to right itself or land after an explosion, and you'll invariably get fired upon several more times before you're able to speed away--more so if you're battling multiple enemies at once and are near enemy gun emplacements. As it is, you're constantly on the run to blow up opponents so that you can pillage health and weapon power-ups from their piñata-like remains. Still, while some of the missions can result in controller abuse, most are quite fun.

Bloodwake isn't a particularly long game, but its replay value is improved by a multiplayer mode that provides a variety of options for one to two players to compete against computer-controlled enemy opponents or up to four people to battle at once. The inclusion of enemy bots, even in a limited sense, is a welcome addition, but the multiplayer mode is otherwise rather basic. Additionally, the brunt of the game is so focused on the completion of goals that simple deathmatch is less fulfilling in comparison.

Those looking for Bloodwake to be the Xbox equivalent of Twisted Metal: Black--the current king of this particular subgenre--will be disappointed, but only until they come to realize that it's its own unique vehicular combat game, one that presents you with challenging missions instead of a series of free-for-alls. Though not without drawbacks, Bloodwake is an entertaining game that could be a good start to a new series. 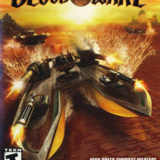 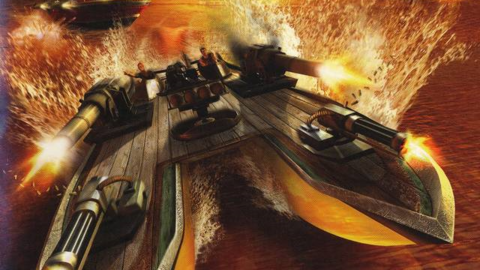 Though not without drawbacks, Bloodwake is an entertaining game that could be a good start to a new series.