Bleach: The Blade of Fate Review

Bleach: The Blade of Fate for the Nintendo DS is a fighting game in the Street Fighter style that lets you lock swords with the characters from the Bleach comic book and animated series. Fans of the Bleach universe will be thrilled to discover that the game totally captures the characters' personalities and their unique attack moves. However, Blade of Fate isn't strictly for the fans. It's a superb fighting game in its own right and should appeal to anyone who enjoys the genre, especially those who have fond memories of playing games like Samurai Shodown and The Last Blade down at the local arcade.

There are 28 characters to pick from, all taken from the first couple of years of the ongoing story. Ichigo, Renji, Byakuya, and many other familiar faces are here, and their movements and attacks are based on the techniques and spirit powers they've displayed in the comic or TV show. Seeing those attacks in motion is sweet, not just because they're accompanied by flames and explosions, but because the large characters and multilayered backdrops are put together with some of the finest 2D artwork yet witnessed on the DS. Fans of the comic will appreciate the hand-drawn character portraits and bankai cutaway scenes, which are scrawled in the rough style of the comic. Meanwhile, devoted viewers of the animated series will delight in hearing each character's numerous battle cries, which were recorded from the English dub's voice actors. Even if none of that stuff matters to you, the explosive sound effects and intricate techno musical snippets will make you want to keep the volume cranked.

Underneath the hood, Bleach: The Blade of Fate is a solidly executed fighting game that beginners and experts alike can sink their teeth into. Battles can involve as many as four people, and combat takes place on a 2D plane. You would think it would be crowded with four characters crammed onto a single screen, but Treasure, the game's developer, wisely made it possible for you to jump between the foreground and the background. If a four-way free-for-all is too much for you, or you're getting spanked in a double-team, you can escape to the other plane at the touch of a button.

The controls are easy enough to figure out. Movement is handled with the directional pad, while your character's light, medium, and heavy attacks are bound to the main buttons. You can dash by double-tapping the directional pad and perform an additional jump in midair by pressing up again once you're airborne. Each press of a button unleashes a basic punch or slash that takes off a slight amount of health when it connects. To dole out more damage, you can perform one of your character's special moves or super attacks, which you do by keying in a command sequence that typically involves a quarter-circle motion on the control pad and a quick button press. The remaining buttons let you block, switch planes, or execute a Bleach-inspired flash step move that lets you instantly teleport across the screen.

You can do a great deal simply by mashing the buttons. However, after you rack up a few matches, you'll come to realize that the fighting system is actually rather deep. Basic attacks can be chained together into combinations, some attacks can be interrupted by other attacks (and supers!), and the flash step teleport can be used in midair or during an attack to create some unique chains. Meters for spirit power and spirit press limit how frequently you can change planes, use the flash step teleport, or perform your character's super attacks. Other players can't just avoid you by teleporting or switching planes all the time, because they get three "strikes" before they have to wait for their spirit power meter to gradually refill. The spirit press meter mainly shows you how many supers you can perform, though you can sacrifice one level to perform a canceling move that lets you slip out of an opponent's multihit combination or super attack with only slight damage.

All of the action takes place on the upper screen. The touch screen functions as an extra set of "buttons" and lets you perform special moves and activate spirit cards with just a single tap. Performing special moves in this manner eats up a section of your spirit power meter, whereas keying in the commands with the directional pad and buttons does not. Thus, this quick input method is mainly for beginners who don't mind dipping into the same meter that limits flash steps and plane swaps. The touch screen's main intended use is to let you activate spirit cards during the match. In a nutshell, spirit cards are power-ups that can make you stronger, replenish your various meters, or cause different calamities to befall your opponent. For example, if you use the "forced crouch" card, your opponent will be stuck in the crouch position for a few seconds. Spirit cards inject some extra excitement and strategy into matches without breaking the game's solid fundamentals. Their effects tend to wear off quickly, and their use is also somewhat limited. You get only 10 chances per match to use them, and at any given moment your choice consists of two cards randomly selected from one of the 15-card decks you've put together.

Among the many single-player modes, you'll probably spend most of your time going through the story mode. Of the available characters, 23 of them have their own story path based on events that took place during the second run of the comic and TV show. The opponents you'll face and the scenes that play out vary depending on the character you've chosen. Sometimes opponents will issue you a challenge to beat them in a certain way, and your success or failure in doing so will cause the story to move in a specific direction. Additional spirit cards are given out after every win, while completing a character's story will earn you tons of money that you can later spend in the shop menu to buy more cards--as well as player costumes, bonus artwork, and music for the sound gallery. Besides the story mode, the game includes the usual sort of single-player modes you've come to expect from games like this: arcade, training, survival, and challenge.

No fighting game is complete without a versus mode, and this one lets you get matches going wirelessly with as many as four people, both online and off. You need only a single cartridge for local play, although the pre-match loading times are significantly reduced if everyone has a cartridge. The online mode lets you seek out opponents randomly or challenge the people you've exchanged friend codes with. Two-person battles are generally seamless and free of lag. When you get four people going in a match, lag is more of a problem, especially if players tend to frequently use spirit cards. For best results, you'll want to stick to people on your friend code list or limit the matchmaking search to your nearby region.

Good fighting games are a rarity on portable systems. Great ones come around less often than Haley's Comet or a tolerable Wayans Brothers movie. Bleach: The Blade of Fate is definitely one of the great ones. There are lots of characters to learn, the combat system is intuitive and deep, and the multiplayer is well suited to local and online connections. Fans of the show shouldn't hesitate to pick it up, nor should fans of the fighting genre who want to trade blows somewhere other than on the couch or at the arcade. 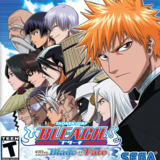