Blast Works lets you design the shooter of your dreams. The gameplay may be simple, but the editor more than makes up for it.

It's hard not to get sucked into a video game when everything you see on screen is designed by your own hands. Blast Works lets you build a palm-sweating, curse-spouting shooter with the unseemly challenge you've always dreamed of but could never satisfy through more conventional means. Or you can let your imagination take over and produce an utterly baffling opus that will sicken people who don't understand your twisted take on reality. The action doesn't quite live up to the promise of the flexible editor, but Blast Works can be an incredible experience if you have the determination.

Before you dip into the versatile editing tool, you're going to have to understand how the basic gameplay functions. Though you won't find any weapon upgrades, screen clearing superbombs, or even scoring chains here, there is one clever mechanic that makes this stand out. Any enemy you destroy can be snatched up by your ship, turning its ammunition against its former allies and providing you with a handy shield. It's a strange maneuver, allowing you to coral a giant ball of foes that can fill up the entire screen, but while it is fun, it's not very deep. A single shot or kamikaze run can whittle your ball of destruction down to just little 'ol naked you, so you'll have to fly deftly between the bullets and sometimes turn your massive fleet invisible to stay alive. There isn't a lot of strategy, though, so you'll get bogged down in repetitive actions after awhile.

The hour long, 15-level campaign serves as more of a template than a full-fledged shooter experience. The entire thing was built using the editor, so anything you encounter can be tweaked to your liking. There is the expected array of ships and tanks, but there are also a few flashes of goofy brilliance, giving you a hint of what you can design if you master the art of the editor. Because you can unlock various cheats, more editing options, and previous shooters by the same designer, it's well worth playing through the campaign a few times, but it’s certainly not necessary if just want to starting building right away. It isn't the most imaginatively designed tour through Blast Works, but it does showcase a number of play styles and visual diversity.

The main draw is clearly the in-depth editing tool, which is powerful enough to bring even the wackiest ideas to life. The majority of your editing duties will be taken up designing a heroic ship, vile enemies, and unobtrusive scenery. You're limited to just three common shapes--triangle, square, and circle--but because you can stretch and color them to your liking, the only real limitation is your own talent. Until you figure out exactly how to turn some squares and a few isosceles triangles into the bug-eyed teddy bear riding an ice-cream-cone school bus that haunts your nightmares, there is a slight learning curve. But once you get over that initial hump, creating crazy drawings is fast and seamless.

The look of your creations is just one step in the process, though. Once you design your protagonist, you'll have to equip it with a custom-made attack and decide which port or orifice from which it will fire. Enemies not only require their own bullets, but you can also implement their flight pattern. You can order them to swoop in from above, drop a scatter bomb on your noggin, and then fly off like nothing happened, for example. For the more advanced ideas, there is the ability to design multipart bosses that break into pieces as you continually pepper them with venom. Invulnerable objects that can be used to create specific paths through levels can also be designed in the editor. For instance, you could line a volcanic level with molten rocks that cannot be destroyed; and if you venture too close, you'll burst into a fiery mess.

Once you design an enemy fleet and enough background objects to add some variety to your grand stage, it's time to tinker with the level editor. Because of the sheer number of options you have at your disposal, this isn't quite as easy as designing characters. You can slow down the camera for dramatic encounters, zoom out to display a massive wave of enemies at one time, or even make the level scroll vertically for a change of pace. As one user has already demonstrated, it's even possible to halt the scrolling entirely and do a spin-off of Space Invaders. It will take some trial and error to figure out exactly how to pull off some of these tricks, but the editor is deep enough to allow for just about any idea.

The visuals are fairly simplistic because everything you see onscreen was created using the editor. Even though this isn't a technically impressive game, it's still possible to design a level that looks vibrant and inviting. The controls are extremely limited (one button to shoot, another to turn your captured enemies invisible), but they function well in the heat of battle. There is nothing worse in a shooter than having to suffer through sloppy controls, but Blast Works makes sure if you die, it's because of your own mistakes. There's a wide assortment of musical tracks and sound effects packed in (some need to be unlocked), but they are all fairly generic. It's still satisfying cueing up an epic score just before you fight a final boss, though.

Blast Works does a great job letting you scratch that creative itch. In fact, it can sometimes be more fun to create your own levels than to actually play them. And if you find that your talents don’t lie in game design, you can always download user-created levels and items from the Blast Works Web site. Blast Works should satisfy any shoot 'em up fan hankering for something unique, but the appeal goes beyond that. The sheer depth of the editor will make any creatively inclined players feel overjoyed. There is a lot to love in this deceptively simple package. 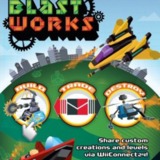