Although the game is over much too soon and its gameplay can feel somewhat stilted, Blade is bolstered by appealing visuals and plus-sized level maps.

Blade Trinity is Mforma's first game facilitated by its new licensing deal with Marvel Comics, which allows it the rights to much of the Marvel universe. Mforma may not have been able to use Wesley Snipes' likeness in the game, but, at 176x208 pixels, it's hard to tell the difference anyway. What Mforma has provided is a competent beat-'em-up featuring most of the Daywalker's signature weaponry. Although the game is over much too soon and its gameplay can feel somewhat stilted, Blade is bolstered by appealing visuals and plus-sized level maps.

There's no one who aligns himself with unlikely allies in order to overcome new and threatening villains better than Blade. In Trinity, the half-breed vampire hunter does his shtick one last time, confronting the original (and therefore most powerful) vampire, Drake. To this end, Blade is aided by two human slayers--hence the name "Trinity." Since Blade has been and continues to be an allegory for the war on drugs, you will start the game in the custody of corrupt police officers, servants of the vampires. After being freed by his human partners, Blade comes out swinging. Over the course of the game, you'll battle such terrible foes as doctors who you kill for their hypodermic needles, or scantily clad vampires who lurch toward you like libidinous ravers. One recurring enemy is Drake himself who, after exclaiming "You fool! I am not Doctor Vance!" proceeds to prove it by attacking you in a patterned way. You'll have this same encounter three times, and it's just as formulaic and facile in each case. Drake is no match for Blade's signature sword.

Blade's argentite arsenal is actually the game's best feature. In addition to your sword, you'll wield a gun, a silver stake, and a sort of homing shuriken. This last weapon actually unbalances the game quite a bit, because after you obtain it, you won't have cause to use anything else, except during your battles with Drake. You'll be able to enter a room, toss the device in ahead of you, and watch it turn your foes to ashes and dust. Fortunately, although this makes the game too easy, it's still very entertaining.

A bigger problem is how Blade attacks. Once you command him to attack, he'll go into a set animation, during which he is immobile. For this reason, it's impossible to change directions while shooting a gun or swinging a sword. This can leave Blade vulnerable to cheap shots from his foes.

Blade's graphics are very strong--perhaps as strong as Snipes himself, who appeared in the last issue of Muscle and Fitness magazine. Seriously, the game looks excellent by the standards of the Series 60 platform, with visually well-differentiated enemies and a distinct gothic flair, especially in the later levels, which are larger than you'd expect. Blade will slash and shoot at a constant frame rate too, except occasionally during very large firefights.

Trinity's audio doesn't hold up by comparison. Throughout the game, all you'll hear is the sound of Blade's footsteps (not those of his foes, however) and the bizarre cracklings made by his weapons. Instead of the whooshing sound you might expect from his shuriken/boomerang, the device makes a noise akin to the harsh crackle of an ill-tuned radio. It's really grating and totally inappropriate.

Nevertheless, Blade Trinity is a solid entry in the mobile beat-'em-up genre. While it's not groundbreaking in any way, it's a good use of the Blade license and a promising first effort for Mforma, who will likely be producing many more comic book-based games in the coming months. Trinity, optimistically lasting four hours, is over much too soon, but it is a fun ride while it lasts. 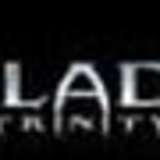