Big Bumpin' might have worked as a part of a large minigame collection, but on its own, it's sort of lame.

Big Bumpin' is one of three games being sold at Burger King as part of a limited-time promotion. Each game is available for around $4, provided you buy some food to go with it. And all three of these games are pretty bad but weirdly compelling nonetheless. Rather than the despicable acts usually associated with product placement--the Burger King's appearance in Fight Night Round 3 immediately comes to mind--these games are top-to-bottom advertisements. But because you know that going in, it doesn't feel particularly dirty. All three games have been developed by Blitz Games, the company responsible for the Xbox minigame collection Fuzion Frenzy. And it shows, because most of these games have the depth of a minigame. Big Bumpin' is the most minigame-like of the three, giving you several different styles to play while putting you behind the wheel of a bumper car. The problem is that none of those styles are fun for more than one or two matches.

The action is the same across all of the different games. You control a bumper car with the left stick and boost by pressing the A button. You can take on the different games in a tournament format by themselves or in multiplayer or Xbox Live modes. Then you can choose a character from a list containing the King himself, the Subservient Chicken, a few generic Burger King window workers, and the King's on-again, off-again girlfriend, model-turned-bad-TV-hostess Brooke Burke. With her role in EA's 2004 racing game, Need for Speed Underground 2, Burke is certainly no stranger to the fast-paced world of illegal video game racing, so she's obviously a perfect choice for Big Bumpin'.

The games give you different goals. Last man standing wants you to bump into the other cars, hopefully knocking them out of the ring, into a hole, or into some saw blades or other decimating device. Own the puck is hockey-like, but rather than getting goals, you simply want to touch the puck, then not let anyone else touch it while a counter increases. The winner is the player who can control the puck the longest. Bumpin' hockey is slightly more hockey-like than own the puck. It does, after all, have hockey right in the name. Shockball is a hot-potato-style game, where you pass off an electric ball to other players and hope that you don't have it when time expires. Power surge lights up different spots on the map, which you must run over to collect power. Then you want to deliver that power to a deposit point. Every time you hit something, you lose a bit of your charge, making your delivery worth fewer points.

Big Bumpin' has 200 achievement points in it on the Xbox 360, putting it in line with Xbox Live Arcade games. The points in Big Bumpin' are especially devious in that they seem tailor-made for people who want to team up with their friends and work together to get all the points. Delivering a full charge of 100 points in power surge gets you points, but the tight corridors mean that you'd have to be playing against total morons for that to happen in a real game. The same goes for a hockey achievement that gives you points if you win a game where the only goals you score were scored by the other team's "mistakes." Unless you're specifically shooting for those achievements with three like-minded friends over Xbox Live, it's unlikely that you'll ever get them. 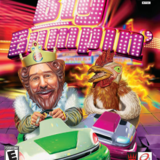