A tale of ghostly intrigue.

There are spirits all around us. Are they ghosts or demons? Malevolent or nice? What matters is not their nature, but rather how we react to their presence. In Beyond: Two Souls, Jodie's life is colored by an invisible force who never strays from her side, and we follow her down a volatile path in which her identity is constantly in flux. Those around her grapple with the existence of these entities, trying to use them to fulfill their own selfish needs with little regard for the ramifications of their actions. Jodie is the one link between the human race and the mysterious apparitions. And through the struggles that she undergoes, you examine the fragility of human nature and develop a strong bond with the beleaguered protagonists.

Aiden has been a part of Jodie's life as long as she can remember. An invisible entity, he hovers nearby, connected to Jodie although with aspirations all his own. You view the world through the eyes of both characters, switching between them with the push of a button. As Jodie, you move like a human does, inspecting items, walking through rooms, and talking to people. Your actions are restricted, giving you only a modicum of different objects and people to interact with as you're continually ushered down the story's path. Aiden has more freedom in how he traverses the world. Not bound by ordinary rules, he flies unhindered through the air, gliding through walls, flinging objects in anger, and inhabiting the bodies of oblivious people. The overarching plot is filled in by your curiosity. Communication gives you a better understanding of the people in Jodie's life, and Aiden can eavesdrop on conversations outside of Jodie's earshot.

By shifting your control between both characters, you understand each of their perspectives. Jodie is often exhausted by having this ethereal presence connected to her at all times. She's desperate to lead a typical life with healthy relationships, but feels as though Aiden prevents her from doing so. She may mutter to Aiden under her breath, urging him to stay quiet when she wants to be normal, such as when she's cooking dinner for her date. Other times, she asks for help from her companion; she wouldn't be able to corral a horse otherwise. She's kind to Aiden, but clearly resents that she doesn't have complete control over his actions. Aiden is trapped in a plane of existence that is not his own. Unable to communicate freely, he resorts to destructive behavior to get his point across. Maybe he wants to help Jodie and violence is the only path he knows, or maybe he just wants attention. The challenges both characters face are easy to relate to, helping you form a connection to them.

Choice plays a role in each of the 20 vignettes that make up the story. You decide whether Jodie responds aggressively, sarcastically, or in some other way to a question, and she can evade the truth or be honest when people ask about Aiden. Major plot points play out no matter which decisions you make, but depending on what kind of character your Jodie becomes, you find yourself in different situations. When invited to a high school party, do you flaunt your powers or shrink from them? Jodie can use Aiden to terrify those around her, but whether you take that route or present a more respectable facade is your choice. Most events take place in a vacuum. No matter how cruelly you react to others, the slate is wiped clean when the next chapter starts. This lack of permanence limits your role in constructing a story unique to you. However, there is enough flexibility in each scene to let you shape what kind of person Jodie is.

During my sole playthrough of Beyond, Jodie was a guarded woman whose trust was difficult to earn and easy to lose. When her morals were violated, she reacted with righteous anger, readily unleashing Aiden onto those who would dare to cross to the dark side. She treated those she allowed into her life with kindness. She gave a man lost after the death of his wife a chance to live once more, and forgave her parents when they caused her harm. She was as balanced as you could ever hope for a woman put in her tenuous position, always searching for the greater good beyond her immediate needs. You could construct the antithesis of my portrayal of Jodie if you desired, or find another path to venture down. So even though the story was not my own, the character was, which made me care dearly for her as the situations became more troubling.

Fight sequences interspersed between quiet scenes of introspection encompass the wild tonal shifts that that are an exhausting but common part of Jodie's life. During these confrontations, you fend off close-quarters attackers by tapping the stick in the correct direction during slow-motion sequences. Trained in hand-to-hand combat, Jodie is a formidable opponent, although her slight stature gives her a physical disadvantage against the men who fight her. To go on the offensive, you must tap toward your opponent, while tapping in another direction dodges. With fluctuating camera angles zoomed in tight, it's not always easy to understand the best course for success. This can be frustrating if you think you should win unscathed, but it feels like an accurate representation of how Jodie would fare in combat. If you try to be aggressive when positioning is against you, you will get hit, so you must be smart to avoid bruises.

Beyond: Two Souls does an impressive job of not breaking the narrative when you fail. At no point does a game-over screen shame you for performing poorly, forcing you to redo a difficult section. Rather, the story continues along no matter how ably you fight. Whereas more skilled players may punch and kick all those who stand before Jodie, others may be blindsided enough times that they fall down. Maybe you get whisked away to a holding cell where the opposing forces hold you captive, or maybe the police who were in hot pursuit are able to surround you. The malleability of these endeavors injects an air of believability that furthers your connection to the world. Every success and failure is yours to live with, molding what kind of person Jodie grows into as you make your way through the lengthy story.

Your controls in Beyond are limiting, letting you perform only the specific actions that each instance demands. Jodie cannot walk everywhere in a building because of locked doors, and Aiden can fly only as far as the tether tying him to Jodie can stretch. And don't expect to have access to every item or person in a room. Beyond forces you to play within tight boundaries. However, such restrictions don't hinder your engagement. You need quick reflexes in the action sequences, which makes it easy to become immersed in the back-and-forth fights, and there is even freedom in certain segments that lets you attack or avoid gun-toting soldiers, depending on how violent you want Jodie to be. The greatest strength of the confining controls surfaces during the quieter moments. Instead of watching an awkward, silent dinner play out, you're a part of it, and you can feel the suffocating atmosphere as you cut steak and drink water.

Beyond: Two Souls is a gripping adventure that doesn't get lost in its supernatural setup. It's Jodie's transformation from scared child to confident adult that's so mesmerizing, and you grow to care for her as you become invested in her plight. The story's biggest failing comes in how it handles dramatic sequences. Heavy-handed music often lays the emotion on too thick, which is a shame because the outstanding acting performances are more than able to invest you in the experience. Top-notch acting makes the characters you interact with sound believable, and their faces are expressive enough that you understand their thoughts even when they remain silent. Beyond: Two Souls so easily melds story and mechanics that you become enamored with this young woman and her extraordinary life.

View Comments (366)
Back To Top
9
Superb
About GameSpot Reviews 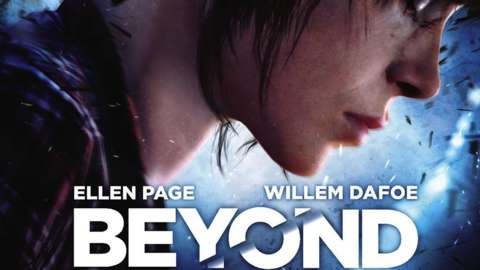 Beyond: Two Souls is a psychological thriller from the makers of the award-winning game Heavy Rain. Players will live the life of Jodie Holmes, a young woman who possesses supernatural powers through her psychic link to an invisible entity. Experience the most striking moments of Jodie's life as your actions and decisions determine her fate.