Strategy and action merge in this complex and exciting sequel.

In some games, you pilot a World War II fighter, riddling enemy aircraft with machine-gun fire as the skies erupt with flames and smoke. In others, you maneuver a battleship across the waves, avoiding oncoming torpedoes while volleying artillery fire toward ground installations. And in still others, you command entire battles by issuing orders to dozens of units, weighing the various strengths and weaknesses of each. In Battlestations: Pacific, you do all of these things during the course of a single mission. Not only does the game execute each element exceedingly well, but it also balances them with precision, leading to enjoyably chaotic battles that stop just short of being overwhelming. By addressing the problems of 2007's Battlestations: Midway and expanding its scope, developer Eidos Hungary delivers a highly appealing experience that overcomes its pacing difficulties with sheer variety and practically endless replay value.

Battlestations: Pacific begins where its predecessor left off, depicting the United States' wartime operations in the Pacific theater, though this time, it lets you experience history from both sides of the coin. Actually, in the case of the Japanese campaign, you'll explore an alternate history in which the Japanese expand their empire across the greater Pacific after destroying Pearl Harbor. Both the American campaign and its counterpart eschew an actual story, limiting narrative exposition to prebattle mission briefings and sepia-toned cutscenes made to look as if they were culled from old film footage. This History Channel-inspired method of storytelling works just fine, though the accompanying dialogue, especially that of the American campaign, is stilted and awkward, and the voice acting is at best amateurish--and at worst, deeply embarrassing.

These are minor gripes in a game with such lofty ambitions, and it's a wonder that Battlestations: Pacific offers so many different types of gameplay and delivers them so well. You'll spend a good amount of time in the cockpit of a fighter or bomber (perhaps enjoying the new cockpit view), laying waste to enemy aircraft, launching torpedoes into battleships, and pelleting PT boats with machine-gun fire. It's a shame that a more standard flight-control scheme isn't an option. However, once you get used to the controls, you'll find that Battlestations: Pacific offers a tight and enjoyable flight-combat experience that is as exciting as any arcade sim. From the B-25 bomber to the speedy F4U Corsair, each plane feels good to fly and appropriately powerful. Likewise, the responsive controls make both aerial battles and bombing runs equally rewarding, especially when you lock the camera on to your payload and watch it slam into the target.

However, Battlestations: Pacific is not a one-trick pony. Flight combat is only one piece of this complex experience, and unless the mission shoehorns you into a single craft, you can switch between any active units at will. This lets you jump quickly into the hot spots in which you're most needed and exercise your combat prowess in the skies, amid the ocean waves, or underwater. Indeed, naval combat offers another satisfying slice of action, and the sheer variety of aircraft that you can pilot is matched by the large number of ships at your disposal. Destroyers such as the Japanese Akizuki are equipped with artillery, antiaircraft turrets, and torpedoes; during the heat of battle, you will find yourself switching between them often. Watching a target battleship begin to flame and smoke during a protracted battle is rewarding, and the loud booms of volleyed artillery make these battles pack even more punch. And just as with aerial bombing runs, locking on to a torpedo and following it to its destination is a terrific way to experience the payoff for a well-aimed shot.

Submarines fill out this impressive variety of units at your command. They demand more patience than their other naval brethren but also present their own intriguing tactical concerns. You can surface if you need to exercise some artillery power (or if you need to refill your oxygen reserves), but doing so leaves you incredibly vulnerable. At a midlevel depth, you can raise your periscope to help you survey your surroundings and properly aim your torpedoes, but you risk damaging the scope should a ship pass overhead while it's extended. If you need to escape the enemy's notice, you can submerge even further. This makes submarines perfect for hit-and-run techniques, though they are vulnerable and require more micromanagement than other units. Submarines are a great addition to large battles, but on their own they aren't much fun to maneuver, which makes sub-based missions slow-paced and boring, such as one in which you infiltrate an Australian harbor. In fact, the Japanese campaign in general is very slow to get moving, and even later missions often spend too much time forcing you to control a specific unit.

The best missions are those in which you must coordinate full-scale attacks on land bases to capture them. Once you're managing a large force of aircraft, ships, and submarines, the excitement levels rise exponentially. You can switch easily from unit to unit, or you can use an overhead tactical map to select a unit caught in the heat of battle. You'll be spending a lot of time gazing at battles from this view, issuing attack commands and creating waypoints for your units from above. Fortunately, friendly AI is terrific, acting appropriately in most situations and avoiding sure death unless you command them otherwise. However, the player is still almost always more capable than the AI, so if a group of units is in trouble, jumping behind the helm of a battleship and pounding the enemy with artillery and torpedoes will help extricate you from the sticky situation. Battlestations: Pacific strikes a pleasant balance between strategic control and heated action by weighing the effectiveness of the AI with that of the player, which in turn means that you must switch from one view to the other, and from one unit to another, with frequency.

This sounds like a lot to digest at once, but even in big, chaotic battles, the intuitive interface allows you to readily get a handle on the action. It's easy to replace a unit should you lose it, whether you're in the midst of aerial acrobatics or issuing orders from the map. It's equally straightforward to issue a simple attack or regroup command to your squadmates while in flight, which helps you coordinate air attacks without having to drop to the tactical view. There are also occasions in which you'll need to repair damaged ships, which is an intuitive process when you're in command of the vessel in question. Some of these orders are carried out only in certain views, so there is some fiddling involved, but whether you use a mouse and keyboard or a controller, issuing orders is user-friendly and ensures that you always feel firmly in control.

Combined, the two campaigns offer a healthy amount of gameplay, doubling the length of its predecessor's campaign. Battlestations: Pacific also provides a much more robust multiplayer offering than the original. Five different modes can be customized in a number of different ways, which in turns leads to a huge amount of replay value, especially considering the amount of variety inherent to the gameplay. The standout mode is Island Capture, in which opposing teams of up to four players each attempt to capture island bases while defending their own. This mode is intensely chaotic, demanding that each team member deploy the best units for the job, keep the overall progress of the battle in check, and jump into the fray when the AI is taking a beating. These matches can last for longer than an hour, but they retain a high level of intensity from beginning to end.

If you want the action without the time commitment, the other modes may be more appealing to you, as long as you adjust the options accordingly. Escort and Siege modes let you experience the excitement without all of the tactical considerations. Competitive mode is a fascinating score-based affair in which players compete for points by shooting down enemies or accomplishing other objectives. Most of the available maps are fun, especially those that focus on dogfighting. Others, such as one in which you launch kamikaze rocket planes into your target, are on the bland side. In Duel mode, the team members take control of a single unit, deathmatch-style, until one team is completely eliminated. This mode is the least interesting, particularly if you choose a naval battle, because it strips away the broader concerns that make Battlestations: Pacific so intriguing. Yet though some modes are better than others, this suite of online options is impressive, and the ability to fill in empty player slots with AI in most of the modes means that you can keep the thrill level high even when it's just you against a buddy.

The visuals have been markedly improved over Battlestations: Midway, and battles look terrific, given the game's ambitious scope. Some graphical weaknesses are apparent: Explosions are unimpressive up close, and though terrain is much improved, the lack of details and the low-resolution textures on land are noticeable. However, for the most part, Battlestations: Pacific is an attractive game. Weather effects look realistic, which makes a naval battle during a nighttime thunderstorm particularly intense. As you'd hope in a game based at sea, the water looks terrific, undulating pleasantly underneath your vessels and reflecting light in a natural manner. There are lots of cool, small touches that enhance the thrills, from the meandering crew members on your ships to the billows of smoke that rise from enemy ships as they take your merciless hammering. Even better, you should be able to maintain silky-smooth performance while cranking up the graphical frills, even on a mid-range PC. The sound effects are on par with the visuals. The loud explosion of a torpedo that squarely hits its target is always a delight, as is the rat-a-tat-tat of your Helldiver's tail gunner. The fanfare-filled orchestral soundtrack has all the typical bombast of most World War II games, but it's appropriate and rarely grating.

There aren't a lot of games that offer as much variety as Battlestations: Pacific does. Yet impressively, no feature seems as if it received the short end of the stick; each gameplay element stands out on its own. Combined, they lead to an exciting and varied experience that should appeal to action junkies and armchair tacticians alike. Although not without its problems, this is a sequel done right: It's just as fun as the original, but it's bigger, broader, and more fully realized. 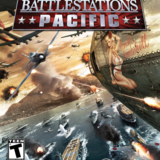