This multiplayer-only slice of the Battlefield series packs plenty of thrills into a downloadable package.

The Battlefield series has been delivering great team-based multiplayer combat for many years, and Battlefield 1943 is the latest scion of this venerable franchise. Set in the Pacific theater of WWII, Battlefield 1943 pits the forces of Imperial Japan and the United States against each other in online matches that support up to 24 players. While this downloadable game features a small number of maps and only three soldier classes, it still captures the thrill of the best multiplayer shooters through well-balanced, varied, and exciting gameplay. Though hindered by some technical issues and other sundry oddities, Battlefield 1943 is a great game that provides a lot of bang for your $14.99.

The victory conditions will be familiar to veterans of the Battlefield series. Each team has a reinforcements bar that functions like a team health meter. The more team members die and respawn, the more this bar is depleted. When one team's bar is fully depleted, the game ends; but it's not quite that simple. Each map has five capture points. Holding these capture points will make each kill worth more and help you deplete your enemy's reinforcements bar faster. The action flows between and jumps around these points as teams struggle to take points from the enemy while defending their own. Players can respawn near any friendly capture point, meaning forces shift dynamically and the battlefield is constantly in flux. You'll regularly have to reassess and attack or defend as the situation warrants. It's rewarding to devise a tactical maneuver and execute it well (flank the enemy's defenses and clear your enemy out with grenades), and though things often don't go according to plan (your jeep is flung into the air by an explosive antitank round).

Unfortunately, coordinating such maneuvers with your teammates is a tough proposition. Voice chat is not fully functional. Sometimes you will be able to hear your teammates talking on an open channel no matter how far they are from you; other times, you will get only silence. If you join a squad (assigned randomly), you share a squad-only chat channel, but this channel is equally unreliable. The only people you can actually invite into your squad are players on your friends list. Xbox 360 players can join an Xbox Live party and chat without issues, but PlayStation 3 players have no such luck. These issues make advanced strategies difficult to coordinate, but after a few rounds, every player will have an idea of how to help the team out. And despite the chat issues, being in a squad is still tactically relevant, because you can spawn wherever your squadmates are (even in a moving vehicle, if there's a free seat). You can also tag a capture point to indicate where your teammates should rally, so even without open communication lines, you can still coordinate your efforts.

It's important to be mindful of the battlefield situation when you respawn because there are three different classes of soldier from which to choose. Each class has a unique weapons loadout that gives it certain strengths and weaknesses. The Infantry class carries a machine gun that is deadly in close quarters and a rocket-propelled grenade launcher that is great against enemy vehicles or structures. The Infantry soldier's repair ability makes him a good vehicle escort, but he is vulnerable if caught out in the open. The Rifleman class is the best antipersonnel unit and is deadly at all midrange distances. This soldier's grenades are good for clearing out trenches, but they aren't very effective against tanks. The Scout, armed with a scoped rifle, is the long-range specialist. His remote-detonated explosives can protect his back or booby-trap a road, but if either of the other classes gets close, the Scout is in trouble. Of course, there's always a trusty one-hit-kill melee weapon on hand, be it the wrench, the bayonet, or the sword. Each class can be equally satisfying and frustrating to play, depending on the situation, and players must spawn carefully and play to strengths of their class in order to be effective.

A good soldier doesn't just use the weapons he carries with him effectively, he takes advantage of everything at his disposal. Vehicles play a huge tactical role in Battlefield 1943, and they are fun to boot. On two of the three maps, all players initially spawn on aircraft carriers and must assault the island to gain capture points. Transport ships are a good way to get to solid ground, but savvy players can employ them later in the game to flank enemy positions. Jeeps are vulnerable to any explosives, but their speed can be crucial in both offensive and defensive situations. Tanks are great at repelling any vehicle-based assault and can be deadly to infantry, but the limited splash damage from their main cannon and lack of maneuverability paint a pretty big target on their sides. Fighter planes, by far the trickiest vehicle to control, can make very effective bombing and strafing runs when piloted by players who know how to set up an attack vector and have the hang of the touchy pitch and yaw controls. Lesser pilots will likely crash or be shot down, while others may go on paratrooper runs and drop in behind enemy lines. Vehicles are found at specific places on each map, and though they often end up destroyed, they respawn frequently enough that you'll never be able to omit them from your battle plans. In addition to their strategic importance, they really liven up the battlefield. You'll cheer when you see an enemy fighter crash into the trees after a daringly low flyover just as you'll curse when you see a tank come up the hillside as you try to defend a point.

There are also fixed gun positions around each of the three maps that can be very powerful, though using them leaves you vulnerable to sniper fire. Antiaircraft guns can bring down pesky planes and worry certain ground targets, while mounted machine guns will cut down any infantry unlucky enough to cross their path. There's also one particular bunker on each map where you can summon an air raid. You'll then control a three-plane bomber wing and get to drop a seriously explosive payload on one area of the map, provided you can steer the not-so-maneuverable wing and aren't shot down by AA fire. The high-altitude viewpoint is a nice change of pace, and watching your bombs explode is a real thrill--so much so that some players make a habit of camping near the air raid so they can hop in every time it becomes available.

The air raid will often take out entire villages, leaving a flaming pile of rubble where protective houses used to stand. Throughout the course of the battle, structures get destroyed, trees are leveled, and even the roads become pocked with craters where the bombs have fallen. This destructibility is not only visually impressive, but it also has strategic ramifications. Felled trees can't obstruct a sniper's sight line, blasted walls offer poor cover, and you can't drive over a bridge that has been blown up. Crashing through trees in your tank en route to capture a point is morbidly satisfying, but it also paves the way for a speedy jeep counterassault. The battlefield reflects the ravages of your conflict and becomes all the more dangerous with each passing moment.

The three maps are well designed and offer a number of ways to attack or defend a given position. A fourth map will be unlocked for each console when players of that console's version reach 43 million total kills, delivering a new plane-heavy mode called Air Superiority. In addition to the voice chat problems, there are still some lingering issues from the game's problematic launch, such as team-balancing problems on the PS3 and occasional graphical oddities on the Xbox 360. Despite these issues and regardless of the promise of future content, this is still a great game. The balanced classes, diverse vehicles, and dynamic maps provide the kind of variety and replayability that is the hallmark of the most engaging online shooters, making Battlefield 1943 well worth the $14.99 asking price. 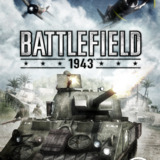