The night is dark and full of errors.

Based on a hit comic book series from the late '90s, Battle Chasers: Nightwar successfully translates the look and feel of a comic into a video game. The mesmerizing animated intro shows exactly what you're in for: a wild world where steampunk meets Dungeons & Dragons, rendered in beautiful, deep-shaded colors. It's only when the turn-based RPG gets down to business that its greatest spell wears off.

The premise of Battle Chasers is that a girl named Gully has taken a pair of magic gauntlets, along with a motley crew consisting of a sellsword, a wizard, and a kindly robot, on a journey to find her missing father. The Nightwar chapter, however, is a minor sidetrack from that journey. The crew gets shot down from their airship over a mysterious island with serious problems of its own. Supposedly, the island is home to a motherlode of mana, which has prompted something of a magic-based gold rush. Mercenaries, thieves, unsavory merchants and, most worrisome of all, the attention of an evil sorceress named Destra, are drawn to the island. The crew's plans to depart dissolve into a trek that goes deep into the island's darkest regions.

Everything is captivating and breezy early on. The game's overworld is dotted with opportunities to battle oozing slimes, vicious wolf men, and surly prospectors. Dilapidated little shanty towns pop up along the way, as well as the occasional side quest, which usually impart a bit of lore before asking your band to thwart a high-ranking enemy in a dangerous place. The bread and butter of the game, however, is its major dungeons. Eight in total, the dungeons are procedurally generated, but each room and its layout is so impressively detailed, the puzzles so smoothly executed, that most of the time it's impossible to tell every dungeon wasn't meticulously laid out until you reset one, and re-enter to find an unrecognizable location.

From the outset, combat is fairly standard turn-based fare, though every character also has a special skill to affect enemies within dungeons--pro-actively stunning, ambushing, or igniting them--just before a fight kicks off. But the big gimmick is the Overcharge system. Basic attacks contribute to a special pool of red mana points that can be used to cast magic and tech attacks, rather than actual mana points. Even as the game progresses, MP remains in short supply, so you're forced to be mindful about whether to build Overcharge or expend mana when using abilities. This gets increasingly tricky, but in a way that keeps you engaged in every battle no matter how small.

Battle Chasers endears you in the process of establishing its world, characters, and combat systems. Garrison, the mercenary, is exactly what you might expect from a square-jawed warrior with a tragic backstory: his terse personality keeps him at arm's length from his cohorts. On the flipside, the hulking mech, Calibretto, is a gentle soul who acts more as the defacto healer, and the beating heart of the story as it goes along. The cast at large brings infectious personality and energy to every scene, and all of this is underscored by a delightfully diverse soundtrack, flavoring typical medieval adventure anthems with everything from Chinese string instruments to bassy, trip-hop backbeats.

The sour notes start to hit around the third dungeon. Where just minutes prior an enemy could barely manage 100 points of damage per hit, suddenly you find multiple basic enemies hitting for 200-plus points in the same wave, leaving debuff effects like Poison and Bleeding in their wake. And then, as if to cut you some slack, you meet a dungeon boss shortly after who struggles to make a dent in your party.

But what do you do when you're overwhelmed? Logically, it's a good time to step back, grind a bit, maybe even attempt one of the bounty hunts from town. This works for a while, but proves to be an inadequate means of levelling up in the later portions of the game.

Instead, dungeons can be replayed for faster XP gains, and each features higher difficulty levels granting better rewards. But dungeons are also slow and rather sizable undertakings that (despite the procedural generation) leave you fighting the location's same enemies ad nauseum, and for the same paltry amount of XP. On PS4, it's a problem exacerbated by long load times, which between the overworld and dungeons--and occasionally before fights on the world map--can last upwards of 30 seconds, making the process of exiting a dungeon to swap characters or visit stores an eye-rolling annoyance. Thankfully, these issues didn't appear on when playing on PC.

Despite the potential for loot within dungeons, it's also disheartening to see that most pieces have strict drawbacks that are difficult to counterbalance. Armor typically raises a character's HP, stamina, and speed, but drastically lowers physical and magical defense--stats that matter against stronger enemies. Weaponry and accessories are more balanced, but typically, what drops from battles or treasure chests doesn't offer the boosts you need.

Shops tease you with plenty of options, but buying new gear is easier said than done. Gold is a strangely rare commodity, no matter which enemies you beat or dungeons you go to. Killing an elite enemy in a dungeon set to the highest difficulty may net you a small bounty and a low level set of armor for Gully. To get the item you really want, you turn around and sell that armor for a pittance, along with a slew of other items, to try and afford good armor from the blacksmith. And quite often the armor you need is restricted to a level three or four above your own.

Hours upon hours, this little passion play repeated itself throughout my playthrough. Even after stopping everything to grind for experience, the next major area would present another drastic difficulty spike, with help nowhere to be found. Stacking debuffs on enemies was often the only effective recourse, forcing the enemy to unwittingly murdering themselves, rather than handle the task through my own attacks. While effective, it's also the least enjoyable way to experience a turn-based RPG.

Despite these issues, Battle Chasers is sustained through the strength of its story, a rollicking tale that takes our heroes literally to hell and back. It's bolstered by some sharp dialogue, gorgeous artwork, and an ensemble that plays extremely well off of each other. It's also a long game, but considering its relatively few major beats, it feels unnecessarily drawn out. It's too bad, because Battle Chasers is otherwise one of the rare comic-based games to have this many pieces in the right place.

View Comments (37)
Back To Top
6
Fair
About GameSpot Reviews 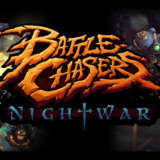