Battle B-Daman fails to capture the fun, dynamic nature of the tabletop game it's based on.

Similar to Beyblade before it, Battle B-Daman is a franchise centered on a competitive board game involving toy robots that shoot little plastic balls. These squat robots have exploded in popularity among children, so much so that there's an animated cartoon series on TV and a line of video games coming out for the Game Boy Advance. The first of these games to land in stores is the aptly titled Battle B-Daman. It lets you assemble your own B-Daman robots from hundreds of parts and then send your creations into battle against robots controlled by the CPU or other human players. To the game's credit, it faithfully duplicates two of the game types used in the real-life board game. Therein lies the problem, however, because what comes across as fun and dynamic on a tabletop in real life is rather dull and limited in this video game.

Parts are collected in the game's story mode, which breaks from the tradition of similar franchise tie-ins by eschewing the top-view role-playing game format for a structure that's more in line with a digital comic book. Away from the battlefield, the entire game consists of static hand-drawn scenes, tons of dialogue, and menus that let you pick where to go and whom to talk to. You must still visit different villages, talk to people, and buy items from shops; like you would in a traditional role-playing game, except that here, every action is selected from a menu. For the most part, the narrative is linear, although certain situations have multiple outcomes depending on the choice you select. There's quite a bit of dialogue spread throughout the roughly eight-hour quest, and the humorous attitude and slick presentation make it all palatable. The anime-style artwork is easy on the eyes, the music used for each scene is upbeat, and all of the miscellaneous voice and sound effects keep things lively. Obviously, this sort of menu-oriented interface doesn't provide the same degree of hands-on interaction people typically expect out of a video game. It does, however, keep the focus where it matters most, which is on assembling and fighting B-Daman robots.

Throughout the course of the story, you will battle dozens of CPU opponents, usually by visiting one of the battle centers located in the villages. Fighting the same opponents multiple times is also encouraged, as new parts become available in the parts shop on a random basis after defeating an opponent. You can also use a link cable to swap parts or to pit your creations against someone else with a Battle B-Daman cartridge.

Collecting parts and coming up with different robots is quite engaging. Battle, on the other hand, is boring and tedious. The big problem is that it copies the real-world game a little too well. Each battle location is a lifeless rectangle, and the robots themselves don't animate whatsoever. While that's also true if you play against someone using the toys in real life, at least then you can admire what you've put together and see the look on your opponent's face while you play. Every so often, a part might even fall off. In this GBA game, the first-person viewpoint only affords a full view of the table and a pixilated 2D sprite image of your opponent's robot. The robots move side to side, but their parts don't move, and nothing ever falls off, even after a rough hit.

The hands-on aspects of combat are equally lame. The two primary game types are direct-hit battle and invasion, which is akin to air hockey. In direct-hit battle, you try to launch balls at your opponent while avoiding your opponent's shots. In invasion, you try to direct the puck into your opponent's goal by repeatedly hitting it with balls. Just like in the real-world game, movement is limited, such that you can only move your robot side to side with the directional pad or aim your shots at an angle using the shoulder buttons. B-DaBalls are fired by pressing the A button. That's all a B-Daman battle is--two players moving side to side hurling B-DaBalls. Certain parts allow special attacks, which can greatly decrease how long a battle takes to play out. Sadly, there are a couple of special attacks in the game that are nearly impossible to defend against, meaning that the winner is usually the player employing those attacks.

A few B-Daman fans will find it worthwhile to play through the game just to watch the story unfold. Everyone else, however, would be better served by buying some of the actual toys and playing with those. 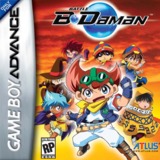