A fortress that endures.

I confess that I look forward to re-releases of popular games because they allow me to notice aspects I might not have caught the first time around, and thereby discover whether they've managed to live up to their critical acclaim. For the PlayStation 4 release of Bastion, I more often found myself appreciating the game's many nods to the novels of Cormac McCarthy, both in the easy (and a bit tired) parallels to the post-apocalyptic world of The Road, and in the main character of the Kid, who recalls a character of the same name in McCarthy's gore-drenched Blood Meridian.

You may not so readily notice these details, at least if you already own Bastion on one of the many systems it already graces, whether it's the Vita, the Xbox 360, or even Google Chrome. Nothing has changed, apart from the requisite upscaling to support the PS4's beefier resolutions; You find no new monsters barring your travels across the ruins of Caledonia, and discover no new weapons to whack them with. It's the same isometric hack-and-slash exploration game first released in the summer of 2011, when independent games were continuing to gain prominence across a number of platforms,

And that's why, if you've never played Bastion before and you have a PS4, you should take this opportunity to jump in. Bastion draws heavy inspiration from McCarthy, yes, but it doesn't smother the experience with seriousness. It may feature a world that's falling apart in the aftermath of an initially unknown calamity, but this is no wasteland where the trees of Appalachia rot with the rest of the world; Bastion takes place in an impressively varied world that's almost ecstatic with hand-painted color--a world that falls back into place as you traverse it as though its destruction were partly on rewind. Darren Korb's fantastic soundtrack weaves through it all, and its power is such that I still sometimes use it to write to almost four years later.

But Bastion remains relevant and fresh largely on account of its narration. As in Blood Meridian, the Kid's travels are narrated by a detached speaker who hangs out at the central hub known as the Bastion, but here, the intonations are less 18th-century New England preacher and more Bourbon Street jazzman. It's all the work of voice actor Logan Cunningham, who adds both weight and the occasional dose of humor to the action, and its power springs from the way it is triggered with almost every action the Kid performs. It's an effect that allows Bastion to transcend simple narration to the point where the Stranger is telling our story as much as the Kid's.

When I accidentally send the Kid careening off the edge of the crumbled world with an overzealous dodge, he says, "And so the Kid fell to his death…just kidding." When I accidentally send the Kid into pockets of brush so sharp that they could have come from my native South Texas, Logan tells me that they "hurt as much as a broken heart." When I use up all my conversation options with him at the Bastion (the place everyone is supposed to run to when things go to hell), he says, "Sometimes there's just not much to say." There is pain in the world that Supergiant has created, such moments seem to say, but there's always cause to crack a smile when things are at their grimmest. And that's a good lesson.

There's a reason that I've saved discussion of the gameplay thus far--it's as simple as the rest of the game's design, though its aesthetic is complex. The Kid has access to 11 weapons, ranging from a battering ram and "flame bellows" to a simple bow and machete, but their use never veers far from the Diablo-style action suggested by its isometric view.

But while the combat itself may only consist of typical attacks, blocks, and dodges, there's depth here in the ability to construct buildings at the Bastion. Add a distillery, for instance, and the Kid can unlock perks such as increased critical chance. Toss up a forge, and the Kid can augment the weapons he finds along the way. The limitation of two weapons at any time (along with a related special ability) does allow for some extensive gameplay variations, as you could easily be an in-your-face melee champion or a bow-and-rifle marksman who snipes foes from afar. (And trust me, if you want to survive the ultra-punishing New Game+, you'll probably want to be the latter.) Want a real challenge? Activate the idols, which boost aspects like enemy damage and armor for the reward of more experience and fragments for upgrades at the forge.

All of this was just as true back in 2011, and it's a shame that Supergiant didn't at least add a touch more variety. Even so, Bastion holds up remarkably well four years later, even as the acclaimed games of the latter day tend to lose their luster once the initial novelty wears off. At its best, this re-release proves that Bastion is worthy of its name. It's a bastion of good game design and innovative narration, and I suspect that another four years from now, it will hold up just as well. 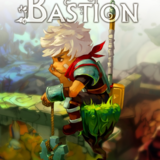 Leif Johnson is a freelancer who writes about games on a ranch north of Goliad, Texas, which has known its fair share of calamities. Fortunately, even though he's pretty good with a bow, he's never had to use it against slimy monsters of the like in Bastion. For the purposes of this review, he played Bastion for around six hours. 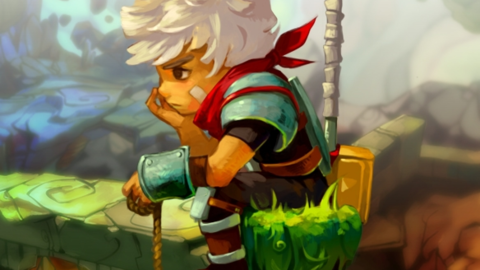 Bastion is an action role-playing game from Supergiant Games.

Everyone 10+
Animated Blood, Fantasy Violence, Use of Alcohol and Tobacco